The Wales Marathon - part of the Long Course Weekend, where there is a 2.4 miles swim on Friday, 112 mile bike ride on Saturday and a 26.2 mile run on Sunday.  Many people sign up for it as part of their training for Ironman Wales later in the year.  Many people say it's far harder to do those distances over 3 days than all in one.  I kinda agree.

However, I was "only" going to be doing the run on the Sunday as a part of my longer distance running training.  The plan was to run "comfortably" after the last few runs that haven't been so great, and hike hills if they were hard.

So that's what I set out to do.

We walked to the run start for the 10am start, expecting a mostly overcast, warmish day.  The sun blazed down on us in our vests and shorts and I thought; "OK, I'm gonna burn to a crisp!".  The gun went off and off we trundled over the line.  We decided to stay together through the twisty, narrow town section and then see what happened after that.  MrTOTKat was on a pacing strategy he was trying out for the Ironman later in the year; run 9 mins, walk 1 min.  I was on "run comfortably".  So we stayed together for a bit until I didn't want to walk when the beeps for MrTOTKat to start walking happened, and I pulled ahead.  As all the runners passed through the section of town near the station, we could smell some absolutely divine curry and there were plenty of comments about it amongst us.

I needed a wee from the first km.  Damn.  Thankfully in the 4th km there were public loos that loads of people were diving into, so I took advantage and was relieved to do so!  MrTOTKat had overtaken me in that time (11 seconds!) and it took me a good 2km to catch up with him again.  The terrain had been mentioned in the race briefing at the start and we were expecting quite some incline to get up to the Ridgeway... and there it came!  Time to power walk and fly past people who were walking normally up it :o)


It was a good learning experience to power walk/hike up the steep hills as, though my heart rate stayed roughly the same as if I was running, it used different muscles and allowed for stretching out my calves and achilles which I think made a big difference later on in the race. 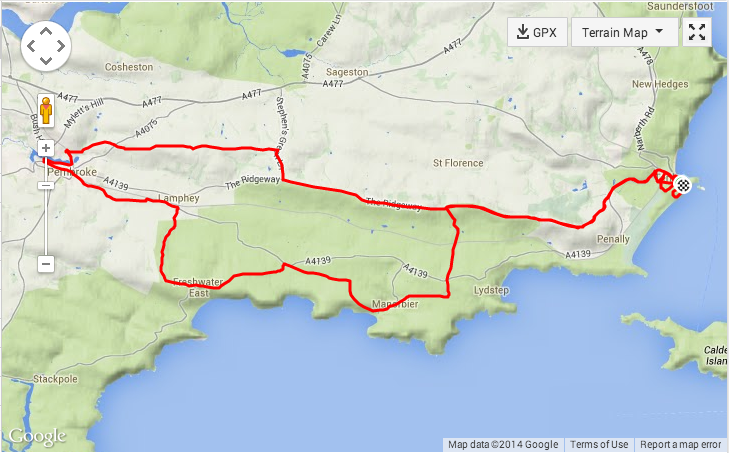 MrTOTKat and I saw each other a few more times during the race, I was surprised a couple of times as I thought I was pulling away more and more and in the end it turned out I was.

After the first hour of running I really felt great.  I started to run up inclines I'd normally use as an excuse to walk, and it felt easy.  It felt awesome.  I was absolutely loving it!  And my heart rate was a lot better controlled than in Rotterdam, where it dropped off like a stone and I felt awful.  I got to about 16 miles in and thought that things were going nicely and if they still were at 20, I'd think about what to do at the finish in terms of meeting up with MrTOTKat.  He'd mentioned it might be nice to cross the line together and as our strategies and aims for the day were different, I thought it might not happen.  So, I decided that if he hadn't caught me again by 23 miles, I'd walk from there until he did, so we could cross the line together.  I'd've ticked the boxes I wanted to tick in terms of objectives by then, and had absolutely nothing to prove.  The hardest thing would be letting people I'd stormed past in the last few miles, just go past me as I sauntered.

I carried on trucking, running up hills and down them, passing lots of people; power walking up only two more hills and finally coming to a really really mean downhill section at around the 22 mile point where I heard a guy just ahead of me shouting "this is the 1 in 4 bit!".   At this point, that sort of downhill was pretty harsh on the knees and I found it a bit hard and a bit painful.

Soon after that was the 23 mile marker where I said I'd start walking if MrTOTKat hadn't caught me by then.  And he hadn't.  So I sauntered really really gently.  In my head I was a bit worried that he might have blown up somewhere or got hurt (I'd heard two ambulances in the distance behind), so I wanted to give him as much time as possible.  I got loads of comments from people jogging past me "almost there love, keep going!".  Mentally, that's really heard to hear when you're feeling pretty fresh and perky and perfectly capable of overtaking them and running happily to the finish.  After a few minutes of walking, I came across a couple of marshalls at a corner sheltered from the breeze, so I decided to stop with them and wait where I shouldn't get too cold.

Happily, I didn't have long to wait before the fluorescent orange vest of MrTOTKat hove into view and we trotted off together on his continuing run/walk strategy to the end.

As we crossed the roundabout at the bottom of the last hill into Tenby, we came across another chap who chatted with us a little and as we started running again at the top he happened to mention we were 5 minutes to the 5 hour time boundary, so we picked things up a bit.  The final little run into Tenby, we weren't sure we'd quite make the 5 hours, but then realised that we had time to cross the timing mat at the start so the time on the pace car wasn't quite right for us and we started to sprint through town, giggling like kids.  It was great fun!  We were loving it!  And as we hit the red carpet, MrTOTKat grabbed my hand and we ran hand-in-hand along the red carpet at full tilt and over the line - hard to do, but awesome fun!

We crossed the line in 04:59:49!  Not that it matters, but it was such great fun sprinting through town for the last few hundred meters.  The time was utterly immaterial to me due to the plan for the day and what I decided to do at 23 miles in.  I thoroughly enjoyed the course (despite it being 100% on road).  I thoroughly enjoyed the brilliant local support; as ever the people of Pembrokeshire are brilliant when it comes to supporting hundreds of amateur athletes they don't know from Adam!  I thoroughly enjoyed sticking to my plan, feeling awesome once I'd warmed up, drinking water when I felt thirsty, eating nothing until after the race, sprinting through town at the end, easily running up hills I'd normally use as an excuse to walk and crossing the line with my sweetie.  I also love that the pace was only a couple of seconds per mile slower than at the London Ultra in 2013 when I was fitter, running faster in general, 4kg lighter and better at sucking up pain, but hurt quite a bit towards the end of it compared with this race where I had no pain in my quads at all. 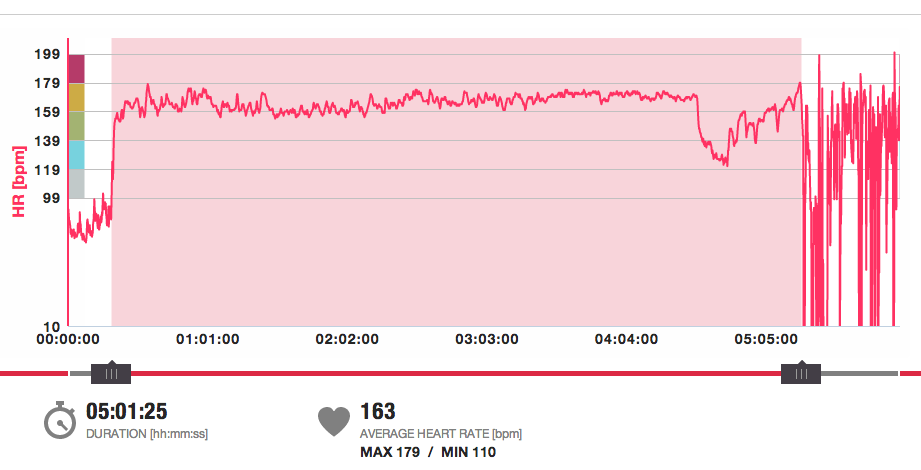 The pink highlighted section is the race itself on this graph.  The massive drop off in heart rate towards the end is the 23 mile point where I walked then stopped and waited, and you can see the lovely sprint finish to a peak of 180BPM at the end very clearly!
Posted by TOTKat at 19:54 No comments:


Training going pretty well; almost all green.  Feeling boingy.  Wales marathon on Sunday.  Tactics almost dialled in.  Let's see how it goes!  I'll be trackable (sort of), but do ignore the team name (must have been pulled in from a system I need to update my details on that I don't know about!
Posted by TOTKat at 22:33 No comments:

I've decided that I'd like to take a week out, running a National Trail, self-supported.

As with Ironman races, I'm thinking the safest, easiest thing is to start near home in case of cancellation, needing to bail out early etc. and keeping the costs down a little.  Handily there's a nice National Trail that ends near to home enough for it to be easily viable.  And I've already walked half of it a while ago (when I was 34kg heavier and not fit in the slightest).

I've chosen the Thames Path - it's well marked, has relatively easy stop off points to stay overnight and shouldn't be too hard logistics-wise.

My first error was to choose half term week - I thought the B&Bs wouldn't be too booked up but it turns out that's wrong.  So, I'm shifting it back a week and starting on the day of Rowbotham's Round Rotherham (ah well, another year!).  The loose daily plan so far is this:-

This feels achievable at the moment, having walked a good chunk of it in the past when really unfit and overweight.  Yes, I had aching hip joints in the mornings, but that's fine and I'm in a very different place now.  It'll get refined as I investigate the B&B situation in more detail, but I'm mostly OK with how it looks so far with a gentler day to start off and the longer days towards the end.  I'll be running for no more than 8 hours in any day (35 miles at 14 min/mile worst case) and I don't plan to take a lunch break due to it being hard to start up again if you sit down.  So if I start around 8am, I'll be done in the afternoon and have lots of recovery time (and likely cold baths wherever I can).

I also have an evolving kit list which, thanks to the wonders of merino (warm and/or cool, and wearable for days in a row even when running), is lighter and shorter than it could be!  I have to carry it all with me, so I need to pack minimally as is practial.
This will likely evolved and change as things spring to mind and there's always the weather considerations as it gets closer.  But a plan is starting to come together, and the running training is too.

Consistency => showing signs of coming together

This morning's recovery run was a breakthrough in recent times.  Odd really, recovery runs aren't supposed to be "breakthrough session"s, but it was because of the way I ran it.  For the first run in a while, I actually ran properly easy.  Heart rate well under my first fuel change point from 100% fat to small amounts of carb.  So I'm really happy about that.  Having struggled to run gently enough for a little while, due to lack of practice, this is a very positive sign.  The other positive sign is that I'm starting to feel a bit stronger.  And, having managed to lay off the wine pretty well, my excess flab is starting to shift too.

All run sessions complete.  All gym sessions done.  No "giving in" to easy higher-carb food.  One, sensible couple of glasses of wine on one night only.

Consistency is paying off!
Posted by TOTKat at 07:48 1 comment: