I done a runnings.

Having accidentally, but at the same time consciously, decided to take a jog for a few feet down the platform on the way home last night, I though I'd have a go at a jog/walk today.  It's been 16 weeks since I had my ATFL repair surgery and I was supposed to be running again at 12 weeks, so I figured it was time.

I do have considerable discomfort on the ankle, but it's a clicking sensation and on the opposite side to where the work was done.  So I figure that's OK discomfort.  I've also been doing lots of stabilisation exercises over the last 4 weeks which has made quite a difference.  However, my jogging is most definitely lop-sided and it seems mainly down to psychological reasons and not putting faith in things that are actually quite fine.

It's been bloody fabulous to get outside in running kit and break into a jog, if only for a few minutes in total.  More please.

A little behind schedule

This is 14 weeks on from surgery and I'm not running yet.  I can't even run a step; it's almost funny when I try.  My brain says yes and when I go to do it, it doesn't work.  It's hard to explain really, but quite simply nothing happens.

However, I have been doing some exercise.  I started sitting on the bike on the turbo 6 weeks ago, with 4 weeks of 3 spins a week and two of just one in the last two weeks.  And today I actually felt confident enough to go out for a ride on the roads.  50 minutes of glorious, confident, self-powered freedom.  It was fabulous.  Despite being over-optimistic about the temperature and thus under-dressed, I enjoyed the heck out of that little ride.  Despite taking quite a gentle hill and feeling like it was really bloody hard, I really enjoyed it.

The confidence came from hugely improved stability and balance on my left leg.  My physio work has been focussing really well on getting me improved from the quite appalling state of balance I had after the boot came off.   I was unable to stand on that foot at all.  Couldn't get dressed standing up, couldn't do anything on one leg and now I can stand on one foot and bend my knee and touch my toes with the opposite hand.  I can step up on that foot and raise the opposite knee and hold it.  This is *huge* progress. 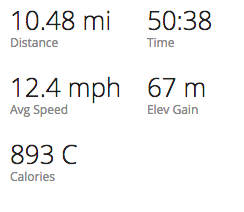 I'm hopeful now of possibly being able to try jogging in a couple more weeks.  That'll be 4 months after surgery, rather than the predicted 3.  A bit disappointing, but shit happens sometimes.
Posted by TOTKat at 16:24 No comments: