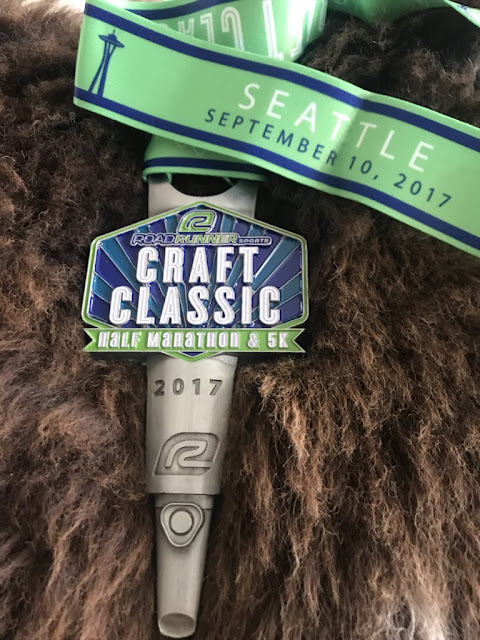 Mr TOTKat and I discovered a while ago that it's really great fun to enter a local race when we go on holiday. And with the total lack of expectation on the day, we often pull out our best times - double win!

Since starting a job which involves a reasonable amount of travel, I've had to find reliable ways of minimising/avoiding jet lag so I'm not a zombie all the time. Running is a fantastic way to combat jet lag! Going West; I stay up as late as I can and try to get a run in just before sunset. Then get up and out for a run as soon as it starts getting light in the morning. Getting daylight on your skin and eyes really helps sort out the rhythm of the day and every time I use this method I just don't get jet lag at all! Heading East again it's the same in reverse, get out and get a run in as close to sunrise and sunset as possible to help reset that inner clock. It really works!

The second thing running gives me when I travel is that it's a great way to explore a new location. This latest trip to Seattle, I found a local half marathon on the first Sunday I was there, which was planned to end at a local brewery! A great opportunity to get up and out and seeing the area! I was a bit surprised at the cost of the race entry; yes it was tiered by how close to the date you entered and I was entering the day before, but still. Pretty pricey! 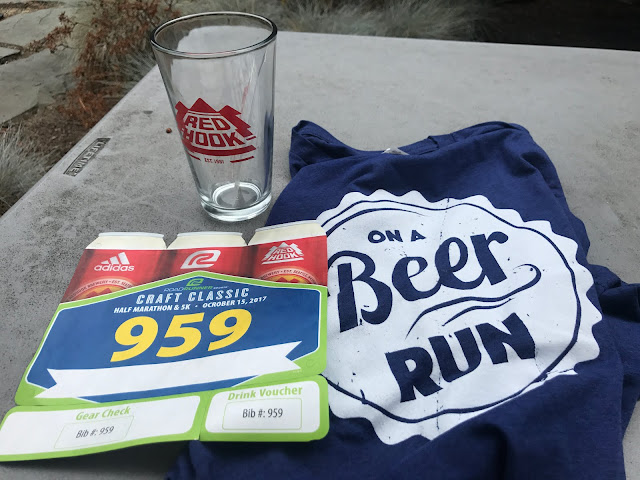 A quick cab ride to the running shop on the day before the race, to enter, pick up race number and the race branded beer glass and t-shirt (adding even more to the overall cost! doh!). And, because I'm weak-willed, I ended up buying a new pair of 3/4 tights (for some reason I seem to have only one pair of training/racing 3/4 tights at the moment and they have a hole in them from when I face-planted in them a while back). 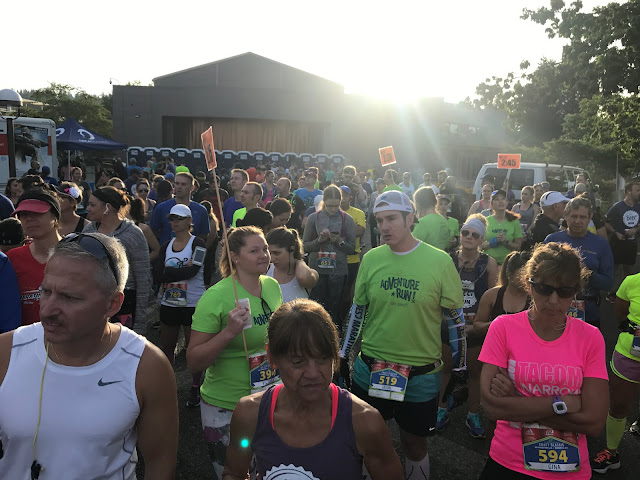 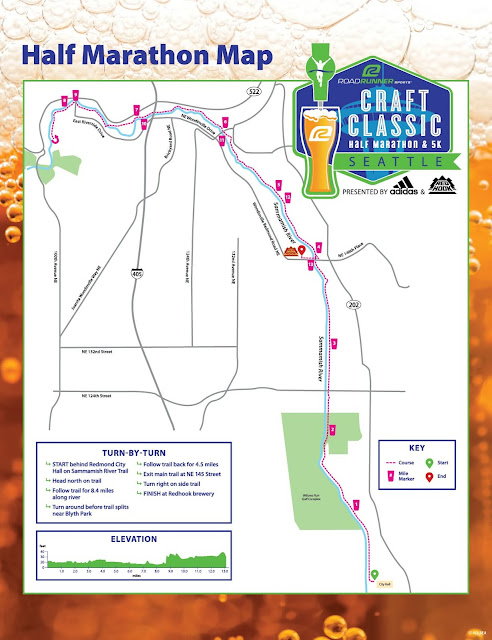 The course was all on "trails". There is a concept of trails in the USA that's different from what folks in Europe would expect. Given that there's a lot of road in the states, huge distances between things even in towns that mean folks drive almost everywhere, there's little walking facility to get from A to B. So what happens in a lot of places is that there are cycle/walk routes carved through the urban area which are usually made easy for accessibility in some way; tarmacced, gravel, packed sand etc. This is what they call a "trail" and in the case of this race route, that's what the trails were. So really good surface underfoot for running quickly AND flat as you like! The weather was absolutely perfect too. Clear, bright and with a slight chill in the morning. It was all lining up well for a good time for me, so I went into the race with a back-of-the-mind aim to cruise hard, making progress to equal my PB or beat it. 3 weeks back from LEJoG and I was feeling quite good in the legs and engine with some of the runs the week before, so why not? 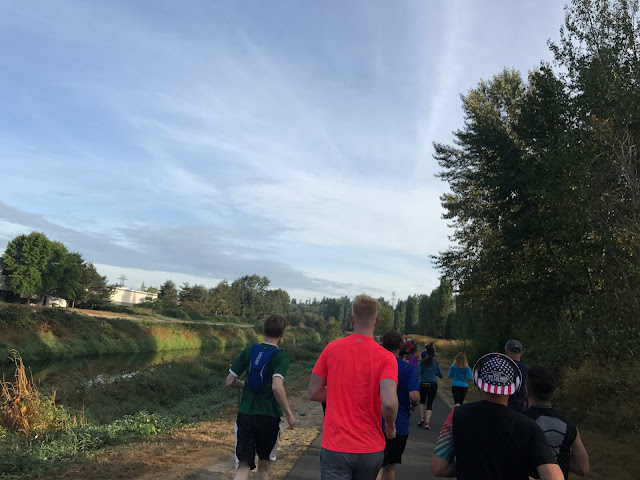 So I set off smartly and set out to make progress without blowing up too early. The sun was bright, the air crisp and cool and the runners started to pull away, but I let it happen. This always happens with a large proportion of folks not being so great at pacing - Marathon Talk describe this phenomenon and the tide going out. And the thing about the tide going out, is that you know it'll come back in again later. It always does. So knowing this and having experienced it umpteen times, I didn't get too caught up in trying to keep up. 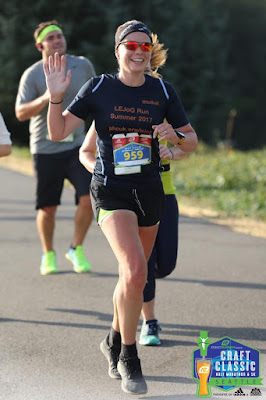 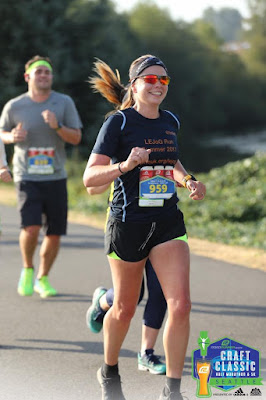 As it was on trails and no need for a whole lot of road safety costs, soon enough it was obvious where a large chunk of the cost of the race went. 5 photographers, with 4 clustered together at a point on the course where the half marathon runners and the 5k runners would pass twice, and the fifth strategically placed on a hill to catch the big efforts. At this point, I'd been following a lady who looked to be hitting a pace I liked the feel of; not too easy, not too spicy. The tide was already coming back in again from the 4th mile or so and it felt great for the first 9 miles - just under 9 mins/mile is a pace that I need to concentrate to keep the effort high enough, but no problem to maintain for a good length of time at the moment. 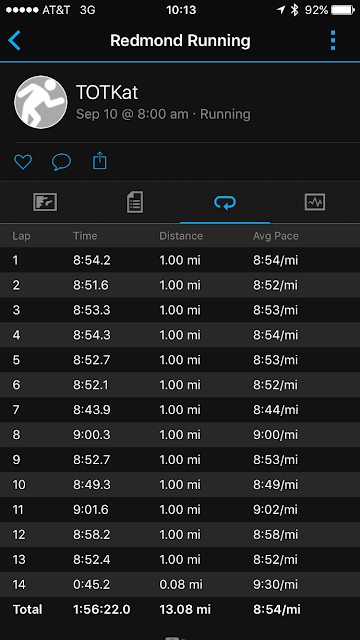 Each time I gently passed her, she'd step up the pace again having eased off a bit, and pass me again. It kept me honest for those 9 miles. Had she not been there, I'm pretty sure my concentration would have dropped and I'd've slowed down and ended up looking at the trees and the river more. But at about 9 miles, I passed her at a dead turn point on the course and never saw her again. There was a little undulation around that area and I was taking advantage of the very slight downhill gradient to get a little help from gravity and I think that's what did the trick. Mile 10-11 had a slight uphill gradient (as did mile 8), which sucked a bit of energy and from there the pace started to feel tough to maintain. Only 3 miles to the end and I was on track for a PB, so I kept the gas on. 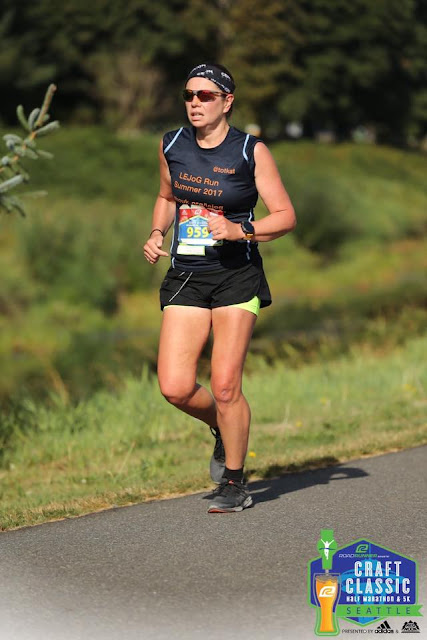 Then in the last couple of miles I made some errors. From before half way onwards, my watch was disagreeing with the mile markers by about 0.1 miles.  My watch would tick over a mile marker, then 0.1 miles later I'd pass the physical one. It's never clear how accurate those markers are in a given race, so the doubts start to creep in about how long you have left to go. As my watch ticked over the 12 miles point, it was another almost 0.25 further on that I passed the 12 mile marker, so I thought I had almost 0.3 miles more to cover than my watch was telling me. 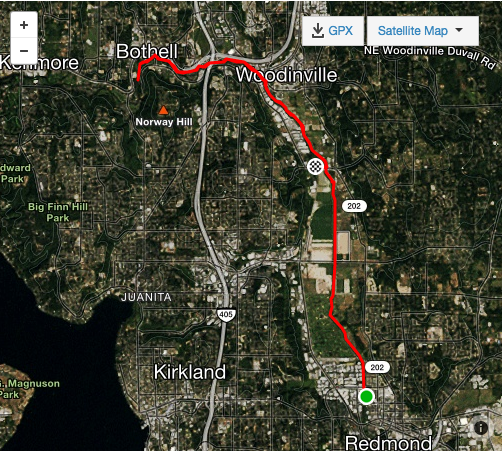 With the discomfort I was now in, I lost heart a little. I thought I was going to come in just under 2 hours by a few seconds, so I eased off a tiny bit and walked a few steps to adjust my t-shirt sleeves which were coming untucked from my bra straps (I'd tucked them in a couple of miles earlier because I was starting to overheat and needed a bit more surface area of skin available to cool down). Having had zero people pass me from after the first half mile, I now had a few folks go by. Not happy about that! Then the route twisted through some trees and up a couple of tiny little steeper slopes and I walked a few steps again there - I'd effectively given up in my head and, of course, it's your brain that gives up before your body. But then I heard the finish line! I turned a corner and it was literally only 100m to the finish! My watch just ticked over 13 miles about 200m earlier and I thought I had 0.3 miles still to go! Argh! So I sprinted over the line, hoping I'd not screwed it up too badly. My watch said 01:56:21! A PB! 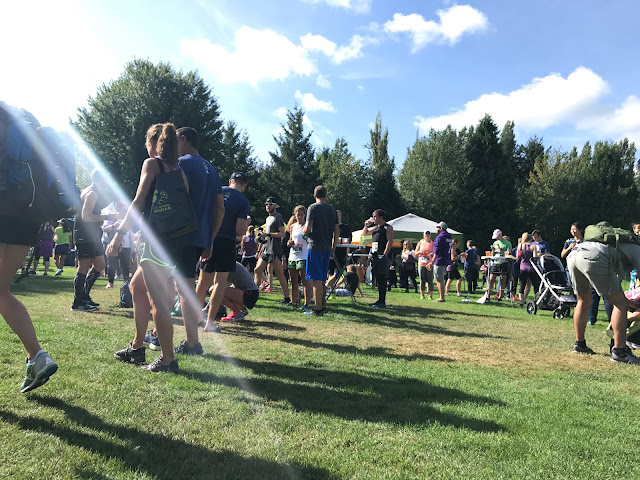 No medals at the end because the race medals had been sent to a race in Florida by mistake and they were going to post them onwards to runners afterwards when they arrived in Washington (state). But there was a lovely picnic area with beer and food trucks on a field by the brewery and one free beer per runner (as long as you had ID to prove you were old enough - this is America after all!) 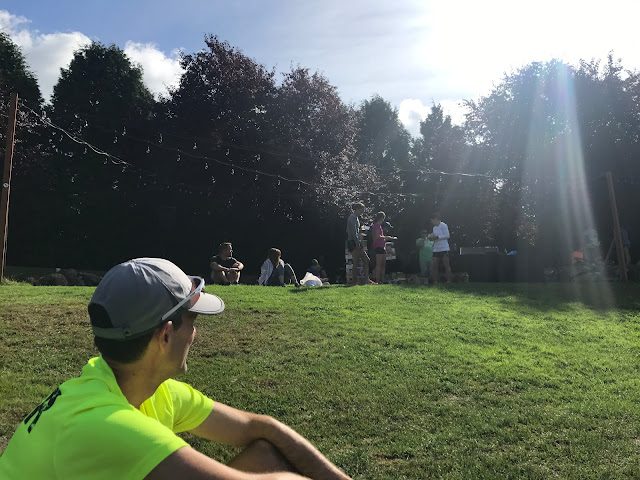 What great atmosphere with friends and family of the runners all getting involved. I sat myself on the grass by the prize giving area, where the pacers ended up congregating afterwards. I got to meet lots of local runners and felt really welcomed - fabulous atmosphere! 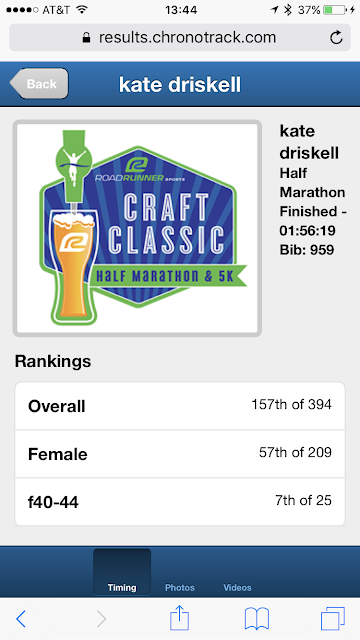 Official results later in the day knocked a couple more seconds off - 7th in my Age Group (and first non-US female athlete over the line :oD - OK there were only 2 of us and the other one was a Canadian! There were 2 Canadian men too.). Very pleased with a PB by 57s when I've really not been training for speed and had no expectations or target for this race until the day before it. Very pleased with my pacing (apart from the slight cock-up at the end). Cheers! 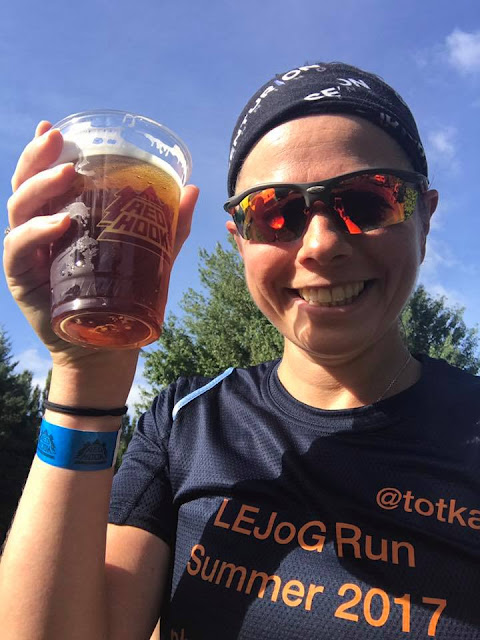 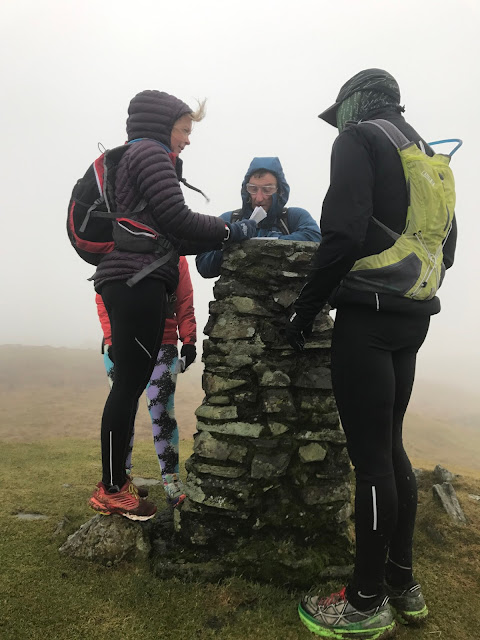 While I'm still decompressing from LEJoG, I'm starting to think about what's next. I still need to write up the run but that's going to take time.

In the mean time... I've got a trail marathon coming up and I've entered the Rome marathon in April next year with the target of getting a "good for age" qualifying time for London (though I don't intend to use it). There's a plan forming for what comes after. Currently I want to build up to The Spine race. And I wanted to do Ring o' Fire then Cape Wrath as preparation, and that works for Ring o' Fire but 2018 is a Dragon's Back year not a Cape Wrath year. And I'm pretty sure that I'd be fine for Cape Wrath but Dragon's Back would be too much of a leap by then.

It seems like there's more thought needs to go into this to really figure it out.

Plus it doesn't have to be races. LEJoG, Thames Path and North Downs Way taught me that. But if not a race, there's even more choice! I'm a starving person faced with an almost infinite menu!

What do you think?
Posted by TOTKat at 21:17 No comments: