Work has been crazy.  I've over-indulged and not done much (any) training.

We had an open water swim session on Sunday, set up by the Virgin Active London Triathlon organisation, but run by NOWCA (a really great organisation who have noticed that open water swimming is really taking off but there are problems around it in terms of finding safe places to swim and safe ways to organise swims and are looking to regulate things - founded by Martin Allen and the infamous Rick Kiddle (truly lovely guy, great coach, great athlete)).  The idea with the Virgin sponsorship of the triathlon is to expand the sport even more, bring it to more first timers and these open water swim training sessions are designed to help people get to grips with the differences and techniques associated and gain confidence in open water.

I don't pretend to be an expert at open water swimming, but I do (so far) seem to be not totally shite at it and I've had no problems with confidence or the rather physical nature of the mass starts you often hear about.  So I was there mostly to pick up any tips and keep Mr TOTKat company.  I enjoyed myself, got a little bit competitive and the group we were in weren't shrinking violets (though all rather British about physical contact in the water - heh, they'll learn soon enough :o)) which added to my enjoyment.  The end of the session was a bit of fun as we all raced to the bank to get out and strip off our wetsuits first, as was the challenge, to find when we decided to stand in the water to wade the last few feet, we were all more than waist deep in a soup of thick silt and mud and needed to get a lot closer to the bank before really trying to stand up and wade out.  Mmmm, sludgey!

Then on Sunday I had a hard session with Geoff the Awesome, who gave me a nicely confidence boosting workout of more old-school weight training where I still failed to really get the snatch technique even remotely right, but came away feeling worked really hard which I've really missed.  After that, we had roast chicken and drank waaaaay more than is a good idea for a Sunday night.

Monday, no exercise - planned no gym as I'd gymmed the day before, but I was supposed to cycle to work and decided it was a bad idea in the morning given the amount I'd had the night before.  Tuesday, no exercise - we were out for dinner, so I wasn't going to cycle in and leave my bike at work - I hate doing that.  And we went for dinner.  And drank waaaay too much again.  Today, no exercise.  I had no gym kit with me but thought I might get a swim in today; work denied me that due to being insanely busy.

So.  I have a race on Saturday - Shock Absorber Women's Triathlon - and one on Sunday - Clapham Common 10K.  And I really can't go to the gym on Friday as that would be foolish the day before a race.   The plan is to cycle and gym tomorrow and rest on Friday before the races.  Sub-optimal, but I don't want a whole 7 days with no resistance training at all.
Posted by TOTKat at 21:14 No comments:

We had a couple of photos taken at the end of London to Brighton on Sunday and they didn't appear on the photo site earlier in the week, so we thought they hadn't made it.  I had a quick check for our individual ones just now and, yay, the ones of both of us were there :o)  (Tell you what, that pink cycling top Mr TOTKat has on was really useful for finding him in crowds of other cyclists!) 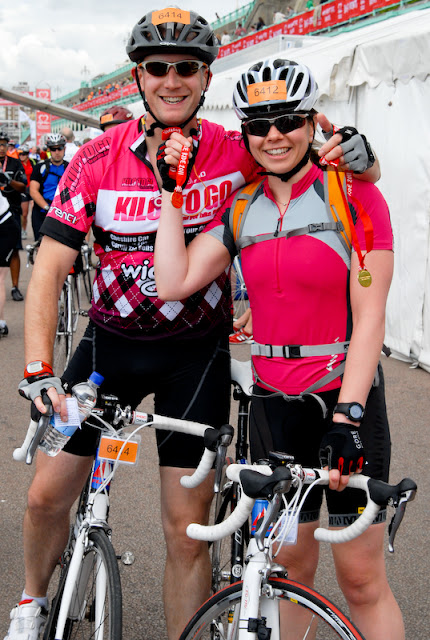 Oops. Or, a first commitment. 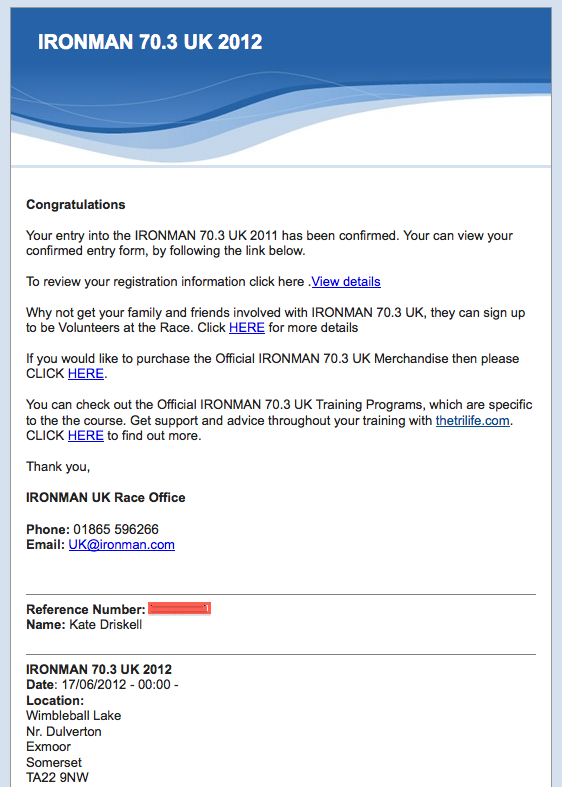 I've wanted to do this for a while; ride London to Brighton on the event day itself, on the official route, with 27,000 other cyclists.  Much as I've feared cycling in large groups and hills and stuff, overall it was a resounding success for me.

The start was 06:30 and we only just got there in time, after a mahousive bowl of porridge (50g organic jumbo oats, 20g organic raisins, 1/2 banana, 10g coconut oil, splash of cream, squirt of agave nectar and water - nuked for 3 minutes in the microwave) to kick-start the fuelling.  With me, I had a large bap filled with ham, chorizo, houmous and lettuce, two 500ml bottles of Powerade and a bag of Ride Shots.  This was also going to be a test of fuelling for a long distance (long time period) event; the estimated ride time from me being 4.5 hours or so.   Calculations would say that I'd need at least 60g x 4 for 4.5 hours of carbohydrate available to fuel through and with what I'd packed, I was quite under, but it wasn't going to be a all-out ride due to the sheer numbers of people and I'm not practised in using bottle cages, drinking or eating on the move.

One thing I think I got quite wrong was the hydration.  I was well, well hydrated which meant that we had to stop for me to wee 5 times!  A total of an hour stopped time for all of that, allowing for wrestling in and out of cycling gear to wee and back into it all again each time and take a good slug of drink.

The first slight hill was a bit of a shock.  For me, it was a little undulation and I was pretty unimpressed by the fact that there were so many people for whom it was quite a challenge that everything ground to a halt and I almost had to get off and walk because things were moving so slowly I could barely pedal slowly enough and stay upright, clinging to the edge of the road in the horrifically potholed bit of tarmac.  Still.  I learned a lot from that first hill and things thinned out quite a bit on hills after that one and none were ever quite so horrid again.

Up and down the rolling undulations mostly overtaking most people up the hills in between wee stops.  No stopping for food at any of the refreshment stations.  We kept on trucking all the way through.  Turners Hill came and went and then the lower slope upwards towards The Hill.  The chattiness died down quite a bit amongst the riders and then there was The Hill.  I wasn't feeling sparkling, a bit tired and probably under-fuelled at the time so I thought I was going to have to cut my losses, get off and walk.

But.  I decided to just give it a go.

People were really good.  Those who chose right from the start kept to the left, did so really nicely.  Those who had to get off part way up were really good at getting clear to allow for those cycling up to continue.  It was all quiet.  So very very quiet.  All I could hear was my own heavy breathing.  At one point, about 1/4 way up I loudly complained "the road surface REALLY isn't helping here" and got a grunt of agreement from my left.  Every time I rounded a corner after the first three of them I thought it was the last one.  No.  Not for very many more.  Each time, thankfully, the slope levelled off a bit so I could let my thighs off a little bit and nearing the top, someone walking shouted "well done, you're almost there!" at me which was absolutely great at the time and I responded with "thanks, could do with more cowbell!" and I reached the top with burning thighs - looking back at my heart rate profile, it was an under-fuelling thing for sure, my heart rate would have gone higher 'cause I would have been able to put more into the muscles, drawing on my cardio capacity more - wondered where Mr TOTKat might have pulled over to wait for me and saw him really quite quickly.  I was about 90s behind him up a hill that'd taken about 10 minutes to climb.  Not too shabby at all!

More undulations and rolling into Brighton itself, with one particularly brown-trousers descent given how tired I was (mentally as well as physically), I hung onto the brakes all the way down and cursed people flying past me at over 45mph.  We rounded the final corner and down the chute into the finish line.  The chute was great; lined with a huge crowd of people cheering and clapping and even a hand bell; a fantastic finish to it all.

Finding a place to lean our bikes, find a seat, beer and burgers/hotdogs we had a good old sit down for an hour or so, bike spotting and counting the Specialized (by far the most common bike make on the day) before walking back down the sea front to the organised transport home (and yet another wee!).

Wins of the day:- my lovely bike (Fuji Team Pro Special Edition with Mavic Ksyrium Elite wheels), Powerade, rest stop toilets, Mr TOTKat for deciding to stay with me through the ride, and meeee for getting up Ditchling Beacon without walking!
Posted by TOTKat at 11:55 3 comments: