...where I did an accidental extra 100m with fins in the 3rd repeat of the main set.  And I don't know what the last couple of minutes in the trace was, but if you cut it out from the total time for the session is 01:09:10. (total distance 3.1km)

Today, by myself, with no-one watching and no-one with whom to sort-of compete a bit:-


Much higher effort today, same distance overall and 12s slower.  That, to me, says my technique was right off today :o/  I dunno.  Maybe the rest intervals were different and I rested more today.  Hard to tell from the trace.
Posted by TOTKat at 18:11 No comments:

Ohyes.  You didn't think porridge was low carb, did you?  Neither did I until I was inspired by some thoughts around the effects of some seeds (linseed, chia seed, mixed seeds, they all seem to do it) on water/milk/cream.  They act as a thickener and especially if they are broken up...

So, here's the recipe.  Serves 1 and scales up fine.  The portion will look small, but trust me it is unbelievably filling!  350kcals, almost 90% from fat, and 3.2g available carbs. 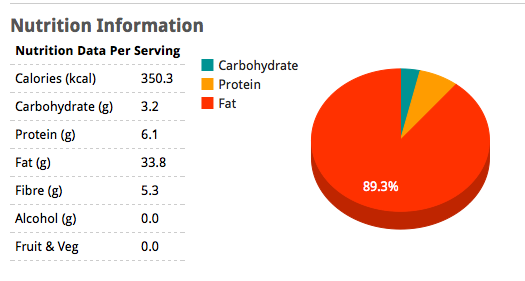 If the porridge is a little runny for your preference, put it in the microwave on high for 30s-1min and leave to stand for another couple of minutes before serving.   It will look like a very very small portion if you are used to porridge made with oats, but believe me this is as satisfying as a portion of oaty porridge made from 50g dry oats.

You can vary the proportions... to increase fibre but keep kcals constant, up the linseeds and water but drop the pecans; to increase fat, up the coconut oil (this will increase the kcals, not much point trying to reduce them).  I had 2tbsp cream rather than 1 and it was lovely!
Posted by TOTKat at 17:11 No comments:

A last-minute decision to go on a training camp was always going to be a bit of a gamble for a number of reasons.  I've been avoiding swimming and getting outside on my bike since I was pronounced OK to do so by the doctors after the crash of Sept 2012.  I'd skip sessions, wuss out of being on the road on my bike with the excuse that it wasn't safe, though the real reason was that underneath it all I was shit-scared of it.  The only training I was actually happy to do was running.  So, heading out to a training camp for a week in Spain seemed like the perfect opportunity to get me out of the funk.

The coaches asked what my objectives were:-

1 - regain bike confidence and handling (sub-objective of simply hours on the bike)
2 - get my ass in the pool and stop hating the thought of it - get ideas of and work on positivity around swimming
3 - health-check running technique, work on any problems there

And I packed up, got on a plane and headed out.

Firstly, EasyJet isn't as bad as I thought.  I paid for extra leg-room, which wasn't a huge addition to the cost and the 3ish hour flight was perfectly comfortable.

We arrived at the golf resort where we were staying (sadly the original accommodation hosts had to cancel our visit at the very last minute, due to a landslide blocking the road to the mansion) and rather than go for a ride or a run as per the schedule, we went for our first swim because it was a bit cold and windy.  And lo, my second objective was ticked off straight away; on the first day, within hours of getting off the plane!


We did a technique set in the pool and as the coach:athlete ratio was so high, I got a lot of personal attention and almost immediate results from two stroke form changes.  From that moment, my attitude to the pool swung from "gnnngh, do I -have- to!?" to "let me in there! when can we swim next?".  Though it was quite tiring initially, because my left arm is shockingly weak (to me) having done pretty much nothing with it for months, it quickly became easier over the days to do more and longer sets and sessions.  Over the 6 swim sessions of the week I started off being able to manage 1200m (already 20% more than recently) up to 3,500m in a session and in not too shabby a time either.

The other, more difficult problem, was the bike.  Since I crashed, I'd been out on the road twice; once to the sorting office and once down to the local sprint tri route and back.  No more than 40km on the road in 6 months!  I'd done 50min-120min turbo sessions, but that's so very different to being on the road and my bike handling was never great in the first place, now it was shot to pieces and my confidence non-existent.  So, ride number 1 on camp was a case of "STFU, buckle-down and get on with it" for me.  A big exercise in shutting up part of my brain that does risk analysis and it took quite some effort. 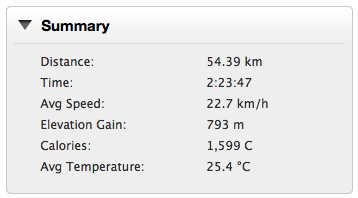 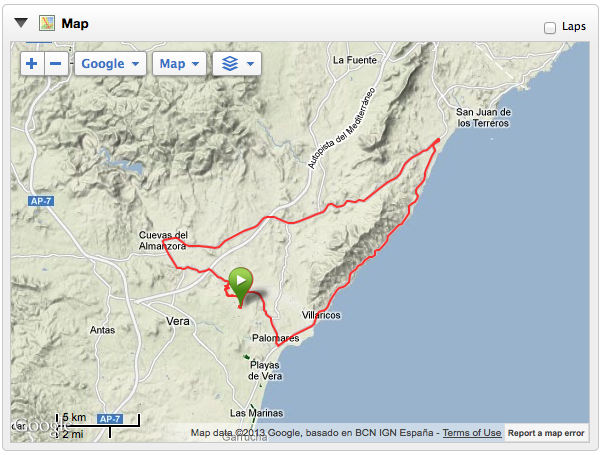 But I didn't die. I managed some hills and a top speed of 52km/h down a hill at one point.  It may sound trivial to most, but it was a huge step forward for me, mentally more than anything else.

The week ticked by, gaining in endurance and confidence in the pool and on the bike.  The only difficulty was the food provided.  As we were at a golf resort, there was little understanding of the needs of athletes training around 25-28 hours in 6 days.  They did try, but some were left running low on fuel and from my low carb, high fat dietary preference point of view, I sorely lacked in vegetables through the week - just about ticked along with the lunch-time salad, but dinner was very very poor nutritionally. 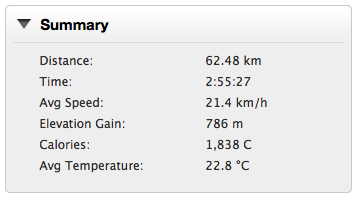 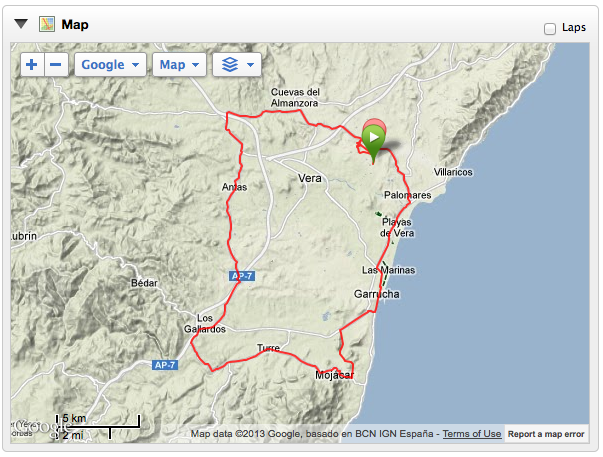 With each ride, I was gaining confidence and increasing top speed down the descents, getting stronger with handling - moving back to being able to signal and take a drink while free-wheeling - and stronger/confident up the hills. (ride times posted here include stopped time and faff at the start) 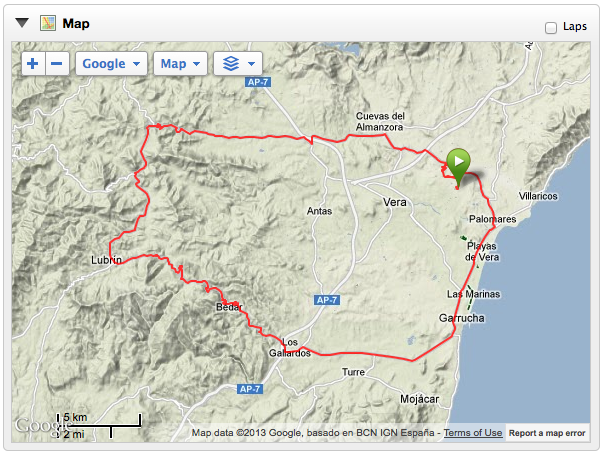 With each swim, I was gaining familiarity with my modified technique, improving endurance, strength and even speed. 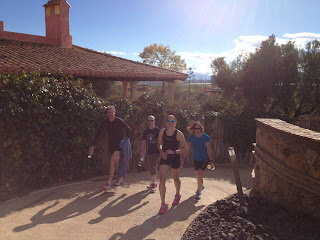 And then, after 7 days straight of training (including the day before camp and the travel day when we swam in the afternoon) and 19 hours of training on a diet of 30-50g carbohydrate per day, I found a limit.  Day 6 of camp had a run scheduled in the afternoon after a morning swim.  I was supposed to do 3 laps of a 5km route at a relatively easy pace.  Others in the group had 1, 2 or 3 laps to do depending on goals.  We were all to head out at the same pace and stay together until the first turn on the route, about 500m from the start.  Within the first 30s I knew something was wrong.  Everyone else was pulling away from me and I couldn't do anything about it.  I felt fine, good mood, legs strong, lungs working OK, heart rate... stuck below 156bpm.  I willed myself to go quicker, but nothing happened.  The day before, I'd done 3 laps of a shorter route, 1 easy, 1 a bit under race pace and 1 above race pace.  That was fine for the first 2 laps and I pushed a HR of up to 168bpm, but the 3rd lap faded and ended up being no faster than the 2nd (which was a bit quicker than it should have been).  This day, nothing was happening.  I just couldn't go any faster.

So. As I trotted gently, I mused what might be happening and thought back to my calculations for the London Ultra with my carbohydrate reserves and where the changes in fuel ratio happen. 155bpm is a knee point in the graph.  It's where I go from burning almost no carbohydrate at all to needing to get 2kcal/min from carbohydrate.  Bingo.  I'd finally completely run out of glycogen in my body.  I guess it had happened during the run the day before and the small amounts I got from the evening meal that night (from the veg and a bit of gluconeogenesis from the protein too) didn't give me anything to be getting on with once I put my body under load.

During a normal training week I'd do about 8 hours training and mostly at low intensity.  If you consider my body's glycogen stores to be a bathtub of water, I'd be emptying it with anything from a teaspoon to a coffee mug while filling it with a soup ladle and maintaining a reasonable level of water in the bath.  This training week, at a higher intensity and much more load than usual, I was emptying it with a bucket and filling it with a coffee mug (harder to keep the carbs low while in Spain, plus I was having a glass or two of wine every night and a lot more milk than usual).  After 7 days, my bath was empty and I was sitting in the bottom and reaching for the tap... I had a burger, potato wedges and a chocolate brownie with ice-cream for dinner on day 7 (6th day of camp).  And the next day, stormed on out for a 3.5km endurance swim at an average HR of 155bpm, peaking at 170bpm and then a 2.5 hour bike ride peaking at 175bpm.  Sorted! 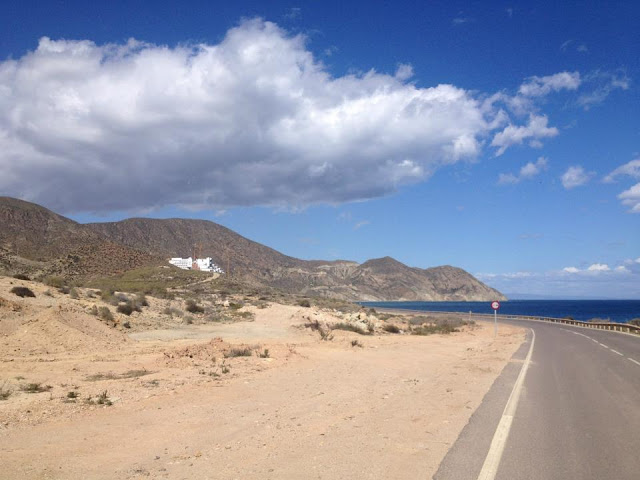 I've had a bit of a think and I don't need to do anything differently around my normal training weeks, but what I may want to do in the couple of final days of training before a longer race, 70.3 and up, I'll refuel after a hard or long session with a big ol' glass of milk to get some carbs in without going crazy.  And if I end up with a heavy week again, go on a camp or similar, I'll keep an eye on the hours and intensity vs. food going in.

I'm back in the UK after a training camp in Spain.  The short version:- it was great.  All of my objectives were achieved and I learned more about training for endurance sports on a low carb high fat diet.  More on that when I've collected my thoughts on it properly. (suffice to say there's an analogy that involves bathtubs coming up :o))

For now, I'll leave you with the best ride of the week:-