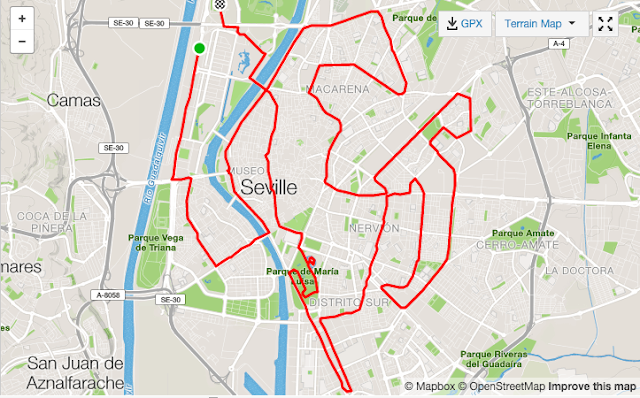 The target was 03:59:59 and it was going to be a stretch.  For that time, I'd have to do 26.2 miles at only a few seconds per mile slower than my half marathon PB from September.  On average only 17s/mile slower including any congestion, water and/or wee stops.  Quite a big mental stretch especially given what happened at the Lee Valley Marathon in October (I stopped at 1/2 way as I simply couldn't keep any kind of pace (and my shoes were hurting)).  That and the last time I actually finished a marathon, I was 3kg lighter.

Seville is also quite pretty.  I'd been there very many years ago with a university friend of mine and we mooched around the old part of the city but this trip wouldn't have much sightseeing really.  Arriving late on Friday, Saturday a lie-in and a trip to pick up race numbers etc. from the (not that exciting) expo - the expo at Rotterdam was muuuch better.  And then up early on Sunday to go run.

And that's what we did - via meeting some of @abradypus'  running club mates as well as some of the Centurion running team (including @jameselsons, my coach :o) ) at the expo and then for dinner.

Cutting a 4ish hour race story short - I set my watch for a target pace that would get me 03:59:xx and stood in the start pen right behind the 4 hour pacer with his enormous yellow balloon.  And I stayed mostly behind him for the first 30km (EU race, everything is in km), getting banged on the head every now and then by the balloon bouncing around and thinking "03:59:59" as a mantra.  Every time I started to doubt, thinking "03:59:59".

The pacer didn't slow through the water stations; someone else got a bottle and brought it to him.  So, as I slowed to take water every other aid station after the first 10km as the temperature rose, I had to catch back up to the pacer with a bit of extra effort.  Which got pretty tricky after a while. 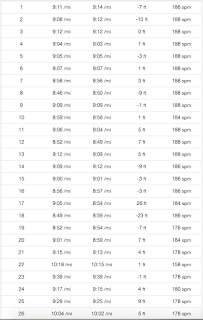 I got to 18km and was really happy that I felt pretty OK - having had the wheels fall off at Rotterdam at 18km, I was worried that setting off at a spicy pace again this time could end the same way.  20km came and still good, 25km... 28km and a bit of grit started to be needed.  I was a bit fed up with having a balloon hit me quite so much, and some annoying short guy in a green vest cut me up every few km but was hanging on to the 4 hour bus still thinking "03:59:59".  There wasn't any shade from the sun any more and I was starting to get too hot.  30km... and I don't remember much until 34km when I was so hot I had to dump cup after cup of water over me, drenching me completely - at which point I peed myself quite thoroughly, which was a surprise.  At least it meant I was drinking plenty enough :o)  I had a massive maths fail though (unsurprisingly for while running), 8km to go... that's about 75 mins to the finish and looking at the time, I worked out that'd mean I'd finish around 04:12.  Not happy with that, I lost heart for a little while, but persuaded myself to try to get as close to 4 hours as I could.  Yeah.  Running maths.  Gotta love it.

I just about caught the 4 hour pacer up again after that extended, slow walk through the water station but at the next one I had to do the same again and totally lost the pacer.  Never saw him again after that.  As I'd thought I was looking at a best case of 04:08 (more fabulous maths) I walked a little up one of the alleyways shortly before the 40km mark, saw that marker and then made a deal with myself to run to the finish from there as it was only 2ish km.  My watch said 03:51:xx.  That perked me up a hell of a lot!  I still wouldn't make sub-4, but I'd still get close to 4. 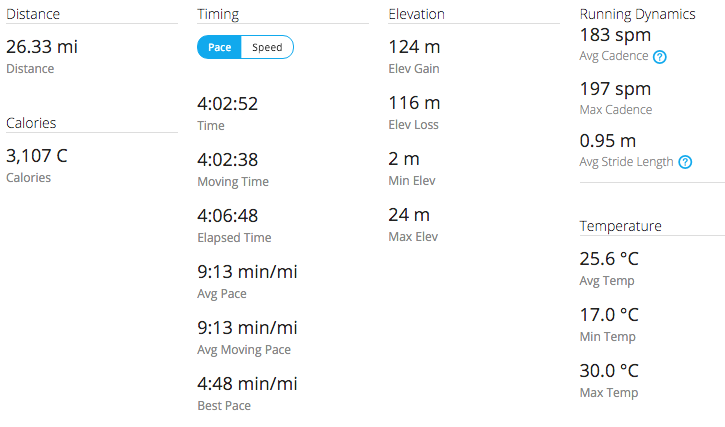 26.2 miles on the watch, I hit the lap button so I could have a "technical" marathon time vs the race route time.  When I set up my watch for pacing, I set a pace range "until lap button press" but no cool down section.  I thought I'd hit the lap button and get a 26.2 Garmin split and then hit stop at the finish line itself.  What I totally forgot was that if you don't set a segment after the lap button press to end the main workout segment... IT STOPS THE TIMER COMPLETELY!  And I didn't notice that happen when I hit the lap button.  So when I rounded the running track, leap-frogging the walkers who were on the inside lane, and finally crossed the line I hit the stop button. 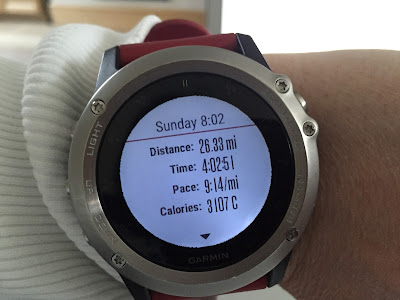 Weaving through the other finishers, I cursed a lot like I did at Rotterdam.  Though there were easily accessibly plastic blankets to keep us warm, the folks giving out medals were hard to find and there was no bloody water!  Why do race organisers do this!?  OK so there was a water station at 40km but I didn't bother with that one thinking I'd get water at the end.  Hah!

I needed to find MrTOTKat and wasn't sure where he might wait for me.  After wandering with other finishers for a little while, I decided to look at my watch to see what time I might have got.  It was still running!  Gah!  So I hit stop, not realising what had happened earlier.  It said 04:02:51.  Cor!

I found MrTOTKat; he was quite light headed and both of us needed to get out of the stadium to somewhere less echoey and loud.  Grabbing a couple of finishers' goody bags (can of Coke, bottle of water, an orange and a chocolate wafer) we got out and sat down for a little while.  I even drank the whole can of Coke, which at the time was glorious! 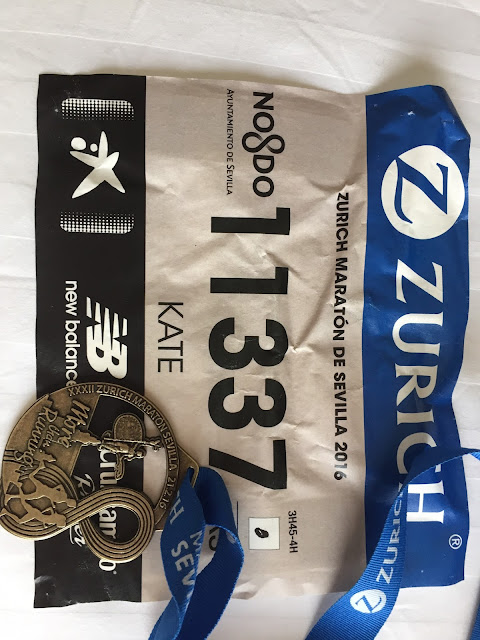 The official finishing time being released revealed what happened with my watch at the end of the race.  I'd actually ended up stopping it when it thought I'd done 26.2 miles, it didn't record the next bit until I hit stop(start) at the finish line, so it then recorded while I was wandering around after the finish line until I saw that the timer was running and stopped it.

This race was much nicer than Rotterdam - staying near the start/finish was a great idea.  There were plentiful pacers, water every 2.5km-ish and no worry about running out of water or having to wait long between stations.  Road surfaces were a bit rough in places and sticky in the latter stages going through and after water/fuel stations but I'd be very happy to go back and have another go.  Sub-4 is definitely possible! 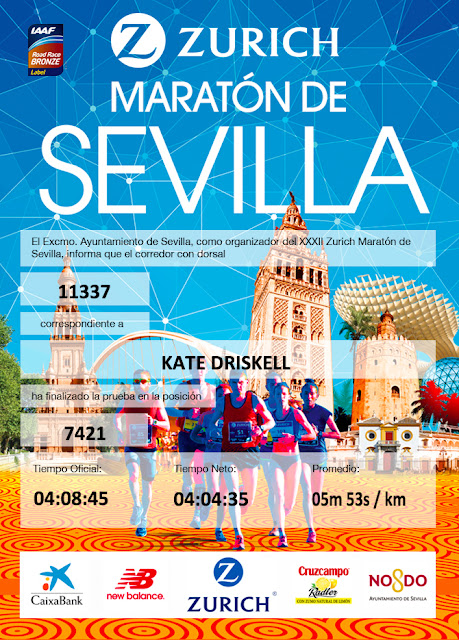