As if Ironman Wales by itself (with Wimbleball as a warm-up) wasn't enough of a challenge for our first year going long...

Originally we were going to do Ironman Wales, with UK 70.3 (Wimbleball) along the way as a pre-amble.  We were planning and training for that and everything was exciting and a bit scary, but not all that scary.  Even now (in March) I can visualise a 70.3 distance, maybe not with monster hills, but the distance itself doesn't hold any real fear already.

Then Mr TOTKat came across this...


"Dan James, Operations Director for IRONMAN UK, explains: “After launching the Ironman Ireland and Ironman Wales events last year some people started to talk about the ultimate test of completing our four races in one season. We thought this was incredibly hard but knew we had to recognise the achievement if someone could succeed in finishing all four in the same year.”

This is no easy feat as it will require an exceptional effort to complete over 420 miles of racing inside three months. A number of athletes, like Charlie, have already put their names forward for the challenge and Ironman have responded to the idea enthusiastically. The UK organising team have agreed to provide some extra reward for athletes who are attempting the extremely difficult task."

My first reaction was "you're crazy!".  We've not even done a 70.3 yet, have no idea about recovery times or even how we'll cope with a 70.3, never mind a full distance.  Plus, the last two are two weeks apart!  So, I suggested that coachJoe be consulted to see just how crazy it was. The response came back pretty much as "do it!" (with a bit more about the practical and sensible bits).  So I thought about it and...

Here we are.  Signed up for 4x Ironman events this year:-

"As a result athletes embarking upon the ‘ultimate’ will receive special race numbers and a commemorative package including t-shirt, jacket and a unique medal as part of a special awards ceremony. A ‘Wall of Fame’ will also be created online to honour the success of those who can overcome the odds to finish all four races in the same season. "

So far, there are 9 people signed up for the challenge, and we're two of them.  Now I'm appropriately excited.  I think this has now got to its logical conclusion. There is no more we could realistically do in 2012.  It's not going to be easy, but then it never was doing "just" the two.

I had a bad bike crash at IM 70.3 Ireland, broke my collar bone, finished the race in a respectable time and got patched up. 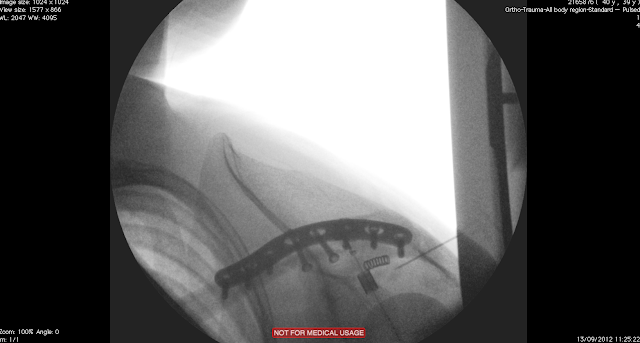 With less than 2 weeks to IM Wales there was no way I'd be able to swim or cycle at Wales, so that was the end of the challenge for me.  4 days before IM Wales I had a titanium plate put in to pull the two ends of my collar bone and the bits in the middle back together again and straight so it will heal properly for the future.  And at IM Wales I volunteered at the finish line and handed out all 4 race medals to my husband when he crossed the line. 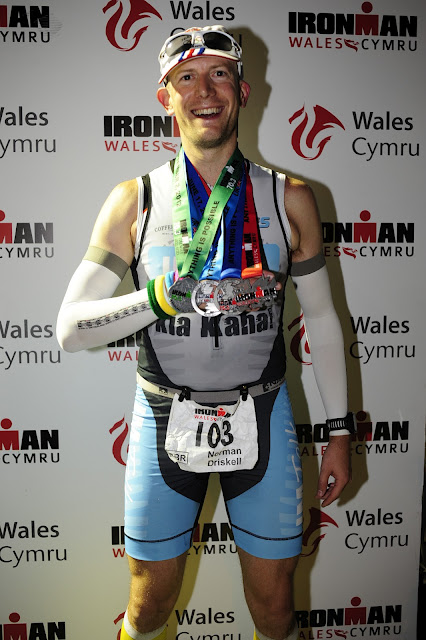 And I'm looking forward to 2013 and a season of shorter races...