Part of an answer...

I had a terrible race yesterday.  Nothing spectacular, didn't feel particularly awful but couldn't get going after the swim at all.  For a flat race with only 4km longer in the bike, I put in a really bad time.  The swim was marginally faster than at London, the bike was 11 minutes slower!  And the run 2 minutes slower.  I just couldn't really put the hammer down in the bike, with no hills at all there were no downhills to really push through and get some good momentum to sweep up the next rise.  The run... felt sluggish and tricky and I was trying to get my legs moving quicker but it just wouldn't go.

And the below graphs show something interesting... the first was the Virgin triathlon and the second one was yesterday's HSBC one. 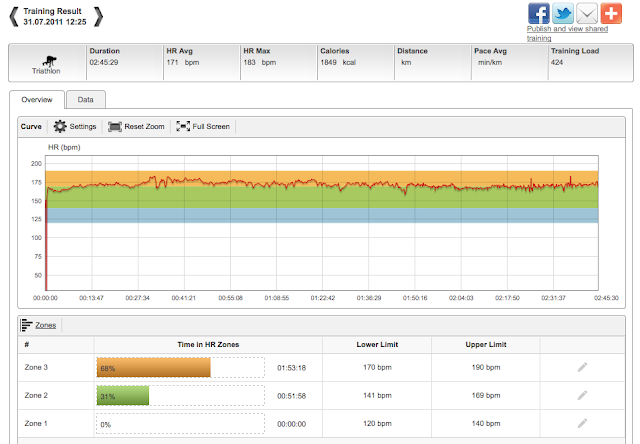 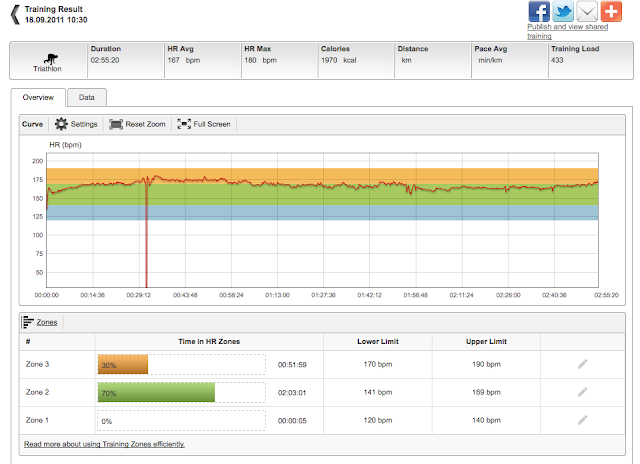 I just couldn't get my heart rate up; most of the Virgin one I was over my lactate threshold quite 'happily', but yesterday I was under it and quite miserably.  I've done some testing with a trainer around endurance and cardio fitness and my cardio fitness is so there, but the endurance is missing.  It is, more than likely, a complete lack of training.  I don't train for endurance on the bike at all.  I barely do any cycling at all really.  The odd commute to work here and there and the odd sprint triathlon.  It just doesn't get the long, consistent pushing happening.  Commuting involves faaaar too many traffic lights to really get going.

There may have also been a bit of fuelling wrongness, but I'm pretty sure the majority is lack of training.
Posted by TOTKat at 10:53