I learned a lesson this weekend.

Having had the dream come true race at NDW100 a couple of months ago,  I should have been nicely set up for a solid second 100 miler at A100 this weekend.  With 10 weeks in between the two, there was time for a few weeks of recovery, then a couple of weeks of maintenance/re-building and a couple of weeks of taper.  This is what those 10 weeks looked like though:


Basically, well under 50% planned sessions started, some cut short, not well, 60+ hours of travel over 3 weeks.  This does *not* make for great preparation for a hundred mile race.

Having not really sat down and thought it through, I toed the line at A100 on Saturday morning.  Felt pretty OK, a bit more chesty coughing, but that cleared up after about 3 hours of running.  The first leg was actually lots prettier than I remember that part of the Thames being, but I got a warning shot over the bows.  A short set of steps and my legs felt super heavy going up them.  Drained.  OK, I'd done around 18 miles at the time, but they shouldn't feel like that after 18 miles on the flat and very gently (5-ish hours marathon pace).  Quick dark patch, but then I ignored it and carried on - no point getting wound up about something at this early stage, it only gives fuel to the demons when they arrive later.

I motored in to the end of the first leg in just under 5 hours (just less than 25 miles in to the race).  Feeling sluggish compared with how I expect to feel at this stage I was still pleased to be doing pretty well for a reasonable, not-death-marched finish in another 75 miles or so.  I declined my drop bag - 4, out and back legs to the same central check point gives access to your drop bag 3 times during the race - as I didn't need anything from it, I chugged some Pepsi, filled my water bottles and got out onto leg 2.

Leg 2 and the first of the Ridgeway ones - I expected a bit of climbing but it didn't come for a good while.  I didn't recognise this section for a while until I realised on the outward stretch to the turn-around point that I'd run it in the opposite direction at Druids last year.  This was one of the delightful, hugely runnable descents that I flew down at Druids, kicking through the leaves and not even noticing the tons of tree roots that lay beneath.  Hiking up in the dwindling light, the rain started bang on schedule at 5pm.  Still under the protection of the trees, I whipped out my waterproof and stuck it on before getting out and into the pretty torrential downpour.  Good move as it meant I was completely dry inside that jacket (one I bought in a massive tantrum in the Lake District last year after getting completely soaked to the skin in a different one).  The turnaround point eventually came and I hid from the rain in the gazebo to get out my head torch and chomp on some ham.  Leaving wasn't too hard (lovely though the volunteers were!), I lost my marbles a little as I asked on the way out of the aid station which way to go.  Hm.  It's an out and back.  This is the turnaround point.  Which way do you think you should go?  (that was my inner monologue after I'd been pointed in the right direction and stumped off for a bit drinking my slowly diluting Pepsi in the rain).

The second major warning shot was hitting the lovely runnable descent.  There was still daylight so it should have been still safely runnable.  But my legs weren't playing ball.  More my knees and hips were jarring painfully - my gait was all wrong and I couldn't run downhill comfortably at all.  Darkish moment again, but I had a chat with myself about being about 30 miles in and of course things were going to be not feeling great as I'd just run 30 miles - it's a long way!

Darkness fell and I switched on my head torch.  This was the bit I was looking forward to.  Solitude, at night, in the woods.  This was one of the big reasons for being here after enjoying the overnight so much at NDW100.  I started to enjoy the dark and the owls hooting and a super long stretch without seeing anyone at all.  Glorious!  This is why I run long!  But the visual contrast between tree roots and trail was too low.  Once; I kicked a root really hard, twisted and almost fell down a steep slope to the side but pulled up with the muscles in my back and midriff to save me from hitting the deck.  That really hurt my toe and my back.  Twice; same again a couple of miles later only on the other foot and this time so hard that 24 hours later my toenail is about to come off.  Again I saved myself from hitting the deck, but at the cost of really twisting my back.

I came in to the aid station 4 miles out from the central base point feeling pretty good.  Ready for a quick turnaround with a cup of Pepsi and a water refill, I chugged out again in less than a minute.  At this point I was fed up with my watch to the point of wanting to throw it into the river.  On the first 25ish miles out and back, there was a section of the return leg where it lost its tiny little mind and clocked in 9 miles over a mile and a half of actual distance, with times that started out at 06:59 and ended at 0:48/mile.  I'd seen a couple of miles earlier in the run with silly quick times and thought it was a one-off weirdness and I'd have to mentally allow an extra half mile or so to the end, but this was now beyond annoying.

About half a mile beyond this aid station, the wheels catastrophically came off.  I was jogging along pretty slowly and realised my glutes and hamstrings had stopped playing.  My back was pretty sore and bending down, to clear some debris from the inside of my shoe, it was twingeing unpleasantly.  I couldn't actually run at all, there was no power in my legs, and not long after that a runner ahead of me took a walking break and I realised I wasn't catching them while I was jogging.  I tried some food to see if that helped - a delicious peanut butter filled Clif bar (oh *why* can't you buy these ones in the UK!?) - but it didn't seem to make much difference.  Thoughts came and went of being well over 80 miles into NDW before being anywhere near this slow (totally untrue actually, due to the elevation profile of NDW!) and it didn't feel great to realise that (bad brain - lying to me!).  Shortly after that, a couple of other runners actually walked past me while I was jogging.  Not good. Very not good.  My glutes felt congested/sore/weak, as did my hamstrings - not even half way in to this race and my legs were shot.  I had no idea what my pace was as my watch was in la-la land so I was ignoring it completely, but I knew it was less than 3mph and that would make for a touch and go finish in under 28 hours. 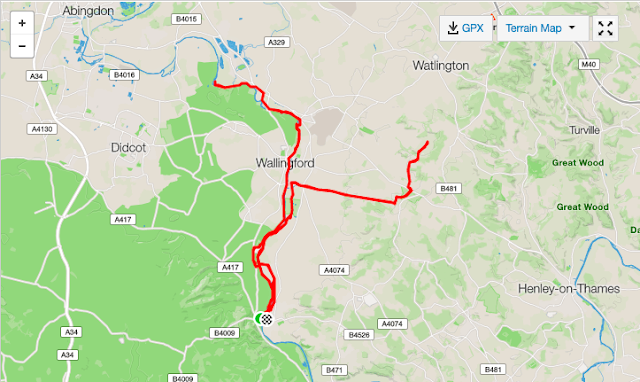 And that was that.  I called it.  At Goring, the central base, I came in and sat for a bit with some tea and a tub of cold rice pudding.  Chatted with MrTOTKat, James, Nici, Louise and Melissa, who were all very encouraging and made it super clear that I could get to the finish as I had 16 hours to cover 50 miles, which I could walk if I wanted to.  But when I stood up, my legs were like a baby deer's.  I was wobbly, unsteady and lacking in much control to go forwards.  I know I could have jog/walked it in to just about beat the 28 hour cut-off, but I didn't want to finish like that.  I didn't come to this race to walk for more than half of it (having hiked a few earlier sections, and the second 2 legs being slightly longer than the first).  I did really want to run into the dawn as that is a glorious experience, but I wasn't going to get that today.  I knew why I was in this position and I wasn't happy about it.  It was 100% my responsibility and I'd gotten over-excited about doing another 100 that I was simply not in a fit state to do.  I cried through sheer frustration and disappointment, and James was really good about that.  I was also angry that I'd let a few people down through my own ego drowning out the pragmatic part of me.  I was angry with myself for all the people who'd wanted to run this race and I'd gotten a place that they'd wanted and was throwing it away.  I could have marched on for some more miles, but there was no point in doing that for the heck of it.  I was pretty perky, awake, full of energy and enthusiasm for getting through the night without sleeping, but my legs were simply not on the same page.

Centurion Running races are super professionally organised, staffed by genuinely lovely people with runners needs front of mind at all times.  I can't praise the staff and volunteers enough - and I'm hoping to give back some by volunteering a couple of times in 2017 (I loved it at 2014 NDW!).  It's a great community and I'm glad to be a part of it!

I will be back though to the Autumn 100.  The first two legs are lovely and I know I'm capable of the distance, I "just" need to put in the smart work beforehand to give it the respect it's due.  Onwards and upwards!
Posted by TOTKat at 12:23