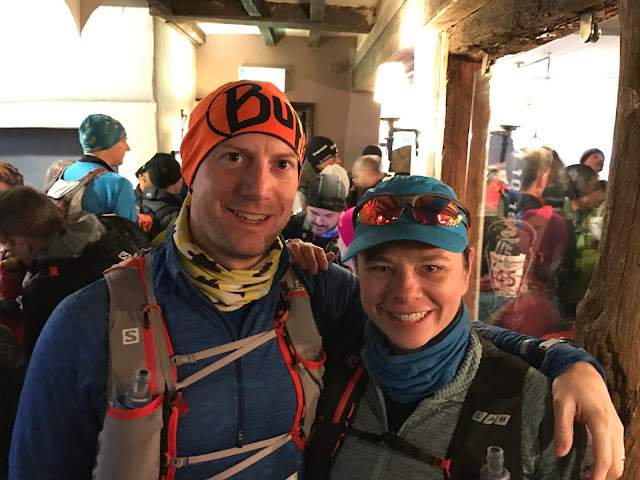 Country to Capital is a landmark in the race calendar to kick off the year. Starting in Wendover, winding through woods, back lanes and fields to Uxbridge then on canals from there to Little Venice,. 43-ish miles in total, there's a lot on tarmac in the first section,;the rest can be muddy and slippery and the unrelenting flatness of the last 23-ish miles pretty harsh.

It was awesome to know the course pretty well.  Having run the race twice previously (2014 and 2016) and gone for a recce run of the first 13 miles on Christmas Day, there was no need to worry about route finding at all.  Yes, the route isn't marked, but if you know it already that doesn't matter. 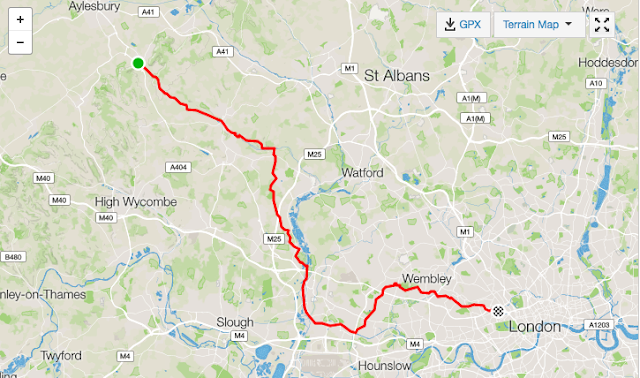 We'd agreed we'd run this one together as a "nice day out". Unfortunately it wasn't that nice really. The forecast of overcast then sunny and dry didn't pan out. It started off chilly and breezy, then it started raining, which turned into snow. The cold set in early. We zipped through CP1 without stopping, only slowing to get our timing chips checked in. The checkpoints at this race are pretty limited in terms of food choices (which is good, as my strategy is in-out-gone): mainly cake and jelly babies, but some savoury at CP3 and the end (mini pastry snacks - pork pies, cheese and onion things etc.). They're really good at checking runners through and helping to fill bottles, but beyond that it's pretty minimal and nothing hot, which is hard on a day like this.

I noticed my breathing wasn't quite right early on - breathing too hard for the effort level.  Then my right hamstring got niggly and my brain wasn't being supportive of running well. I got a bit whiney, but MrTOTKat stayed mostly within earshot and waited every now and then for me to catch up. Darkness in the brain was telling me to give up, but that's actually quite hard to do on this route. Checkpoints are far from any useful transport options and as it's point to point, once you're beyond a certain distance you may as well get to the end anyway for the time it would take.

From well before hitting the canal at Uxbridge, I was finding it hard to run the flats all that much. So we were run/walking already before 20 miles in.  Compared with the 2 previous runnings of this race I've done, I was in much worse shape at this stage. Food didn't help and the cold was causing difficulties with my hamstrings. Even when it stopped snowing, it was still really chilly.

MrTOTKat was awesome. I was whingey and petulant even at time, but he was encouraging and supportive; if he'd not been with me, the last 23 miles of the race (and in particular the last 12 or so) would have been miserable instead of just difficult. We jog/walked until the last checkpoint, where it turned out we were 65 mins or so ahead of the cut-off time so we could walk the rest in if we really needed to.

We crossed the line together, freezing cold and in the pitch black. Almost last, but together and in good spirits. It took warm food, many hours and an additional 3 layers to stop shivering hard with the cold. The medal was nicer than last year's, but I think I might have finally realised after three times with this race, that I simply don't enjoy the route. I need to remember that when I'm next tempted to sign up for it. 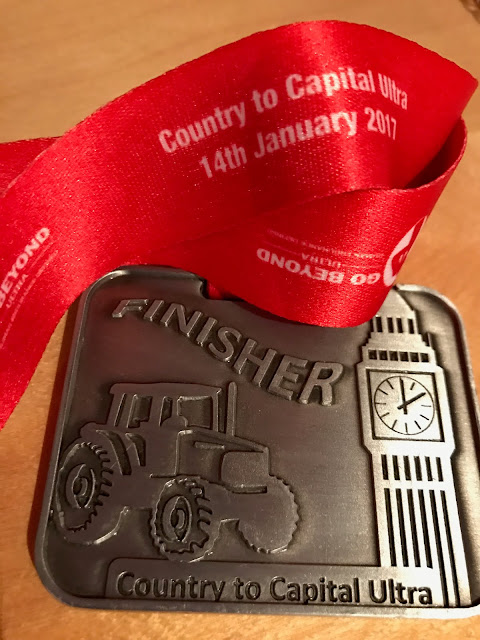