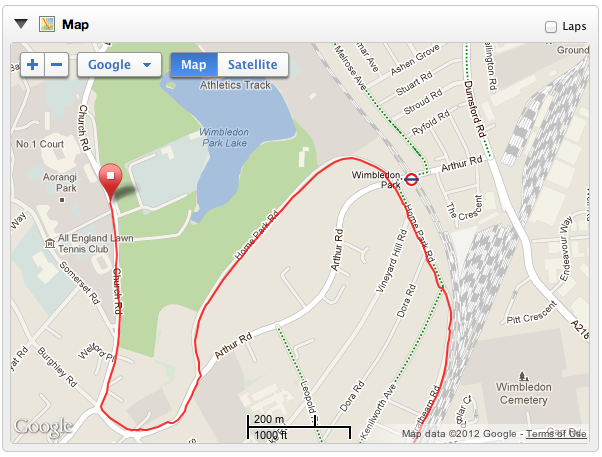 I took a wrong turn again!  GAH!  I keep doing that at Wimbledon Park station and go almost straight on instead of jinking right then left to up Melrose Avenue and end up in the right place (I stopped the Garmin when I had realised I was definitely on the wrong side of the Park, so that's why it looks like I stopped at the golf club - I did carry on and went into the track from the West instead of the East).  I really need to stop doing that.  So I ended up with 5.5km warm up instead of 3km (well, it was supposed to be 1km, but it's 3km to the track, so.) and up and down Wimbledon Hill a couple of times.  Must remember to go past the station, not to the side of it! 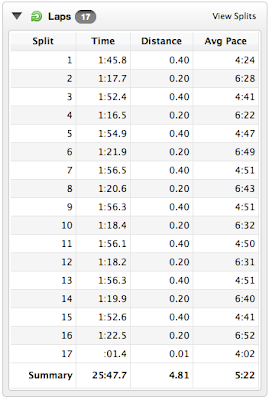 Anyway, I got to the athletics track eventually and it was deserted, nobody there to take any money from me or even anyone else to share the track with.  No open toilets either, which was annoying as I needed a wee.  The track was deserted for almost all of my session apart from the second half where a lady and her small son ran around a few times too on the inner lane.  The surface was quite nice, very grippy and slightly less harsh than pavement/road running, but I think there's not been a lot of running been going on there over the last few weeks as there was a lot of debris on the track - twigs, leaves, moss etc.

So my first ever running speed session.  I don't know what to expect.  I think I didn't go hard enough.  I'm not sure if I could have... just nothing to go on really other than feeling a bit rough in the 400m sets.  8x400m with 200m recovery jogs in between.  And as I don't ever do this session again in my schedule, I'm not sure I'll ever know.

I'm pleased with the consistency of the 400m sets though, if not the overall average speed, but then that wasn't going to be high with the recovery jogging in there.