100km and a cheeky tea and bacon buttie

This was a good weekend.  Very pleased with it.

Almost 100km covered under my own power; 74km hillyish cycling on Saturday and 24km running on Sunday - the furthest I've run to date in one session.

Having concentrated on cycling in the South, I turned and looked North on Saturday.  Mr TOTKat and I cycled to my parents' house last year one weekend.  It took a Bloody Long Time, was Hard and Horrible and we stopped lots because I was pretty unfit.  This Saturday, I decided to drop in for a cup of tea, un-announced and just get the train back straight away if my folks weren't in.  74km and 3ish hours after leaving the house I arrived, without a drop of sweat, feeling great, and to the surprise of my parents. 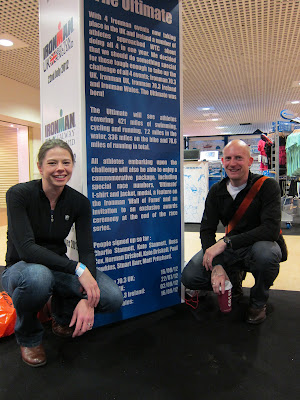 Sunday, Mr TOTKat and I went out for a long, slow run up to Richmond Park, round once and back again. 24km, the furthest I've run in a single run.  It wasn't my most favourite running experience, I felt a bit horrible at times probably because Saturday's ride wasn't all in heart rate zone 1 (the goal was bike handling skills, not Z1 ride, so I did put some effort in up and down the hills).  You really do tend to feel it the couple of days afterwards if you put in some higher effort in a session, and Sunday proved that to me.  There was also an unpleasant moment running down a hill where my right knee twinged all the way down, but then no problems afterwards.  It was a bit of a shock, having had no pains at all for months now, but I think I'll put it down to bad form racing down the hill and see how it goes.  After our run it was home again for some food and a bit of shopping before heading out to the TCR Show.

There were a few show discounts to be hand and some fun watching people swimming (well, splashing about like loons, mostly) in the infinite pools in the Zoggs swimming zone.  We found the Ironman stand and our little moment of fame on their promotional piece about "The Ultimate" and had a good long chat with Dan James and Kevin Stewart of Ironman UK.  Rather over-excited by all of that and a nearly sensible amount of money spent on a few bits of kit, we toddled home in the driving rain.
Posted by TOTKat at 12:30