Hell of The Ashdown - Devil's DeTour

I've had... issues with cycling and hills.  So I decided to get over it and sign up for the silly annual hillfest that Mr TOTKat has done a couple of times before.  Slightly annoyingly, there is a longer and a shorter route.  And being completely lacking in perspective around hills, I decided to do the shorter route just to be safe.

The shorter of the two routes of the Catford Cycling Club annual large-sale sportive is the "Devil's deTour".  I thought I might manage 03:15:00 and did some maths on the 2011 results to see what the mean time for women over that course was and at 03:34:00 I thought top 1/3rd was a reasonable target to aim for.

Mr TOTKat was down for an 09:02 start for the 100K route, me 10:22 for the 50K route, so I had over an hour to kill after he and Mupps headed off for some hill-related fun.  Luckily, my overshoe decided to have a zip failure, so I spent a good 20 minutes looking for ways to stop it from flapping about and unravelling.  It was cold enough that not wearing them would have been probably a bad idea.  A cable tie was the first option, but I didn't like the fact that I couldn't get it off in a hurry, so I ended up with two elastic bands knotted together and threaded through the loop on the back of my cycling shoe to help it stay in place.

I ran into a Thames Turbo member and had a bit of a chat before a group of us headed off for the 10:22 start time slot.  Thankfully for me, I was pre-warned about the first hill being utterly ridiculous; "Major Climbs Cudham Test Hill – New in 2009, this literally gives a short sharp shock in the first mile or so. Don’t worry if you have to walk the 1 in 4 stretch at the top because in any case we ask you to dismount to turn right at the T junction."  That and the words of warning from Mr TOTKat prepared me for the silliness that was the first hill.  4 of the others in the same starting group, however, had no idea what was in store for them, so when they rounded the bend and started up the incline, three of them wobbled into the middle of the road, one of those fell sideways and got off, the other two zig-zagged in front of me a bit until I passed them in the first couple of metres and the last one disappeared behind me in a fit of giggles.

I powered up really very slowly, but knowing that was the worst of the steepness over, got to the junction at the top in one piece and only had to unclip at the top briefly before turning right and getting on with the ride.  Very pleased with the steepest bit over with in the first few minutes, I wasn't sure if that hill counted as one of the four main ones on the shorter route nor how the others would compare.

Annoyingly, MapMyRide doesn't consider the whole of Star Hill due to a plateau before the summit... 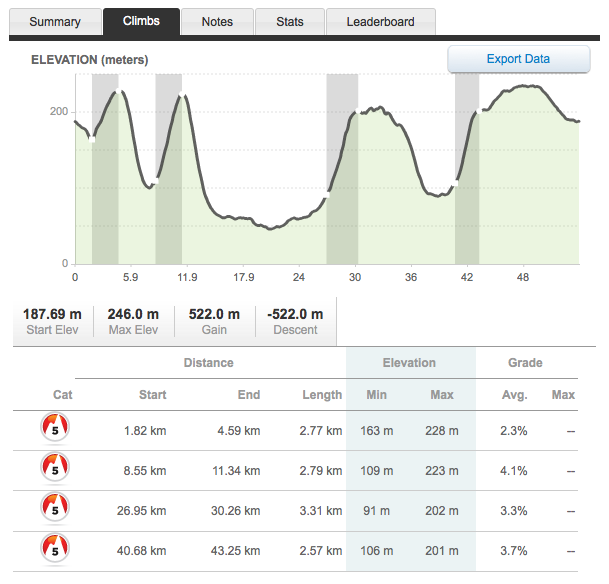 Long story short, I didn't hold back like I have been on my long rides.  I chased down two guys who were ahead of me and descended better than me, but I caught them on every ascent; the big hills and the rolling rises too.  I gritted my teeth through the big ascents and hung in there, was a bit cautious on the descents due mostly to worrying about oncoming traffic and the narrowness of some of the roads.  Next time I'll know better.  Also, I stopped a bit long at the feed station and ended up chatting to a guy who is to my right in this photo and making me grin like an idiot... (note the elastic band around my left ankle ;o)) 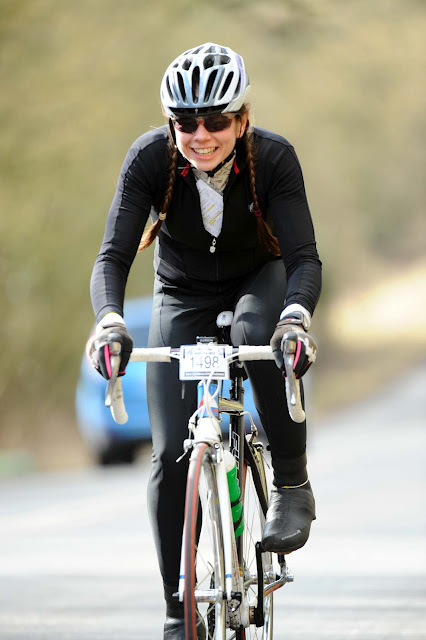 I didn't intend to spend long at the feed station, but ended up there for over 5 and a half minutes mostly due to chatting.  If I'd just crammed in the two gels and swigs of water I'd've been out in a minute or two, tops.  And at the end, I really wish I had!

I don't remember this hill/photo point... but it looks pretty steep to me.  Note the guys behind me, out of the saddle.  I still can't do that on hills; fine on the flat though.  More bike skills practice please! 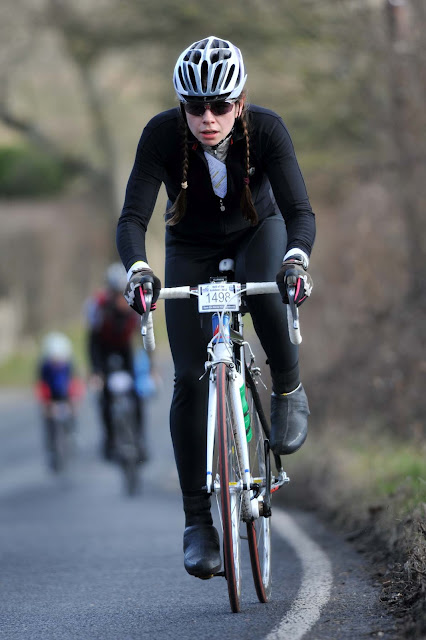 And here I am, giving out to the photographers part-way up Star Hill...  I was pretty chuffed at this point having spent a good few km chasing down a slightly large bloke all in Castelli gear with red pants underneath that were grinning through the black of his tights.  He'd passed me at a point after I'd messed up my gearing and was slower than I should have been, with a cheery "well done!".  I wasn't having any of that, sorted my gears out and proceeded to have him up the next hill.  Then he beat me down the next one.  So I beat him up the next.  Repeat for 3 hills and then I lost him, or he lost me I can't remember which now. 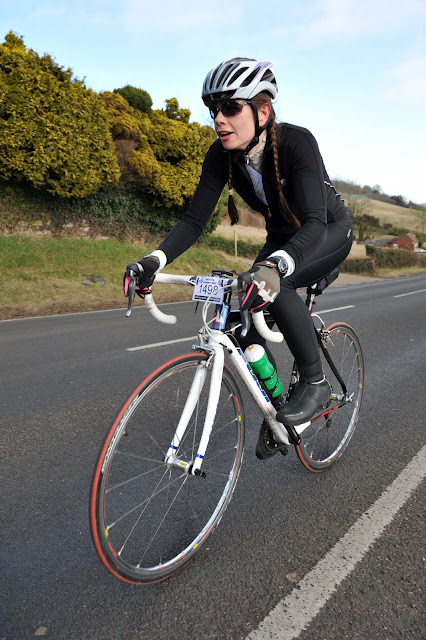 4km from the end, I was pumping down a gentle descent, really picking up speed, passed the first of a pair of cyclists, slowed a bit for a bend and then hit something big in the road.  I didn't see what it was but I yelled out "shiiii-i-i--i-i-iiit!", almost lost the back end of the bike, veered across the road and fought the bike back vertical underneath me.  Poor bugger behind was worried he was going to hit me, the guy in front yelled out to check I was OK.  I quickly made it known I was fine and carried on sawing at the pedals to get my speed back as I was almost at the finish and really wanted to get a decent time.

Round the final few bends, up the tiny little hill to the finish and I stormed over the finish line to the squealing of the timing mat.  Starving hungry at this point, I forgot about the planned recovery meal in the car and headed straight for the cafe for a sausage and bacon baguette and two teas, via picking up my finisher's certificate hot off the press.  02:26:14 - little did I know at that point it was only 00:01:47 behind the first woman!

Once I'd stuffed a ton of food in and cooled down a bit, I nipped back to the car to pick up Mr TOTKat's trainers as he was due to do a 15 minute run at the end of the ride.  There were loads of sociable people chatting away so I ended up talking to two guys who were quite half-decent cyclists with lots of stories. Mr TOTKat and Mupps turned up and Mr TOTKat changed into trainers for a quick trot around the block before coming back to a sausage and bacon baguette.  I scoffed another two teas and a hunk of carrot cake before we packed up to go home. 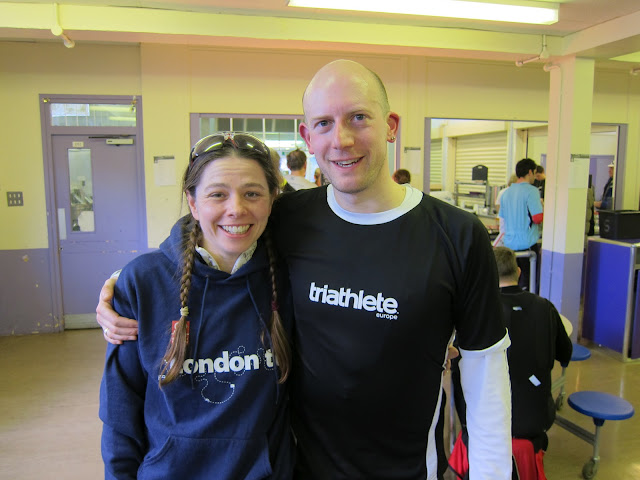 As we drove home, I thought more and more about last year's results for this event and the fact that the first woman over the line for the short route did it in 02:20:xx.  I thought I was in with a shot of placing top three... and had to wait for hours for the results to go up.  Hitting refresh over and over until I got bored, and was eating dinner when an SMS came in from Mupps that I might want to hit refresh again.

4th place overall for the shorter route and 2nd woman by 1 minute and 47 seconds.  If only I'd yapped less at the feed station!