Sunday's long ride (with short run afterwards) was a bit on the scary side, thinking about it beforehand, what with all the snow that's going on and the ice warnings...

Still, I set off a bit later than planned but with a belly full of porridge and tea, with Percy Pigs, a cereal bar, my phone, an extra thermal top and a flask of hot tea in my rucksack,  a bottle of water on my bike, and a decent length route plumbed into the Garmin.

The route was a good idea. A really nice change from the usual tedious routes and a few hills in it for good measure.  In theory, looking at the profile and the description, there were 3 hills on the route.  One and two were un-named but number 3 was Box Hill.  Demonised and scare-mongered that hill is, but I decided to stop being a wuss and go for it anyway.

Having trundled in to Kingston and taken a left where we normally turn right to go to the Thames Turbo races, I ended up on a long, straight, quiet road by the side of the river for quite some time.  This is where I hit the only patch of black ice I've ever come across and in the first split second, I had no idea what was going on, almost lost the back end of the bike, felt a weird gyroscopic effect and the struggle of my feet trying to fly away from the pedals but being clasped firmly in place by my cleats.  Not fun. but I didn't go over and it was finished in less than a couple of seconds.

The route carried on into villages, past a church where, at the one hour mark, I stopped for a minute to cram in the first five Percy Pigs.  They are great.  Seriously.  Then came the first hill.  It was a bit hard, but nothing terrible, nothing more than Wimbledon Hill which isn't so bad really.  Then came the second hill, which was a bit harder than the first.  Really quite a bit and I was slogging very slowly in the lowest gear, getting a bit worried about falling off due to moving so slowly and the piled up snow at the sides of the road forcing me more into the middle of the road with there being a couple of blind dips for oncoming vehicles.  It got so steep at one point that I was properly worried that I might go over into the road with no way for a car to see me, so I got off and walked up a little bit, before getting back on at a shallower section and finishing the climb.  Having passed through a few places where there were National Trust car parks and other sites, I decided to stop at the next one as that'd be 2 hours in to the ride and I wanted to have some tea and a cereal bar and hopefully a wee stop.  I got the tea and the cereal bar, plus some more Percy Pigs, but I'm afraid I had to make some yellow snow as there were no loos.  Two hills down, one to go.

Having got up the first two hills, I was genuinely worried about what Box Hill had in store for me especially having had to walk up a section of one of them.  If these hills were not named or publicly feared, how was I going to get up the one people talk about?  The tens of metres passed on and on with no sign of another hill...

Then I came to the first road that was coned off and  marked as "CLOSED", I trundled through, thinking "naaah, they don't really mean that, it looks fine to me.  It was a gentle downhill to a hair-pin bend at which point I was faced with this:- 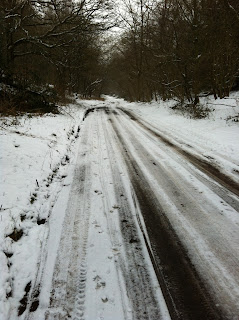 And a lady out for a walk in the snow with her walking stick.  We chatted for a bit about the state of the road.  I think she thought I was crazy.  We headed off on our separate ways and then the road got worse and became this:- 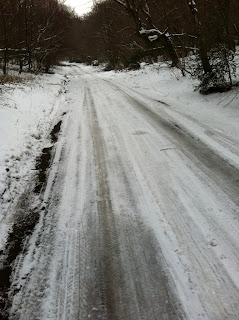 The difference is subtle, but enough that the bike was going sideways and over bumps and even after I'd got off to walk, I fell over while wheeling my bike along.

Thankfully it cleared quite quickly and I was back on the wheels again and off for a lot more km before I came to the dreaded, revered, much-famed Box Hill.  I took the turning to the bottom of Box Hill, found the right hand turn that starts the climb to find, yet again, "ROAD CLOSED" and, just for fun on a hill, speed bumps.

Box Hill.  What a let down!  I was expecting some monster of a steep hill that would put the burn into my thighs and lungs, but nothing of the sort.  It's a set of fairly pedestrian switchbacks at a civilised gradient and even with speed bumps added in, it's just a very long, very shallow climb.  Unfortunately for me on Sunday, the reason for the road closure became apparent as I neared the top it got icy like that last photo again.  This time I didn't get off and walk up the last little bit, I just cycled purposefully onwards.  Easy on the handlebars, not fighting the bike and not putting a whole lot of power into the pedals.  And I almost got to the top, before I skittered sideways over a particularly lumpy, rutted patch of ice and lost the back end, ending up lying on my side, pedals still clipped in due to the low speed with my bike flapping between my legs. Ohboy did I feel silly in that position.  As I was just getting back on again I was passed by someone on a (far more appropriate for the condition of that road) mountain bike who said "that was fun wasn't it?" to which, the only appropriate response was "not really, no".  I now have a mahousive bruise on my right hip.

At the top of Box Hill, there's a National Trust cafe thing with benches outside where I decided to have more tea and Percy Pigs.  My poor bike was a teensy bit snow-bound from the trip up the hill... 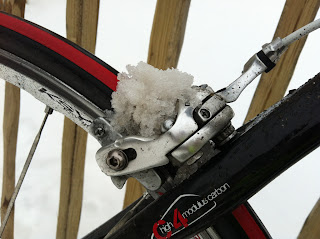 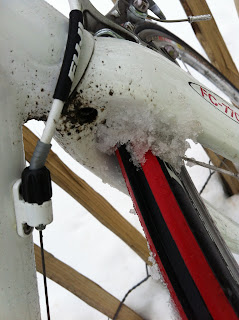 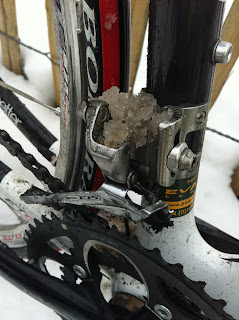 ...but the tea was still hot and the last 5 Percy Pigs a bit sweaty and sticky from being in my back pocket so long.

With a bit of help from a friendly mountain biker from Wimbledon, the packed-in ice in my cleats was dug out with a stick so I could get back on my bike for the last stretch home.  To be honest I was a bit naughty and turned up the gas a bit much for the final stretch.  This was supposed to be an easy ride, and it was apart from the scary bit up the earlier hill where I had to get off and walk, but the call of the home stretch often proves a bit much for me to resist.

Last week was a good un' and the ride at the end was just great.  I loved it, despite falling over a couple of times. Again! Again!