I think coach gets it now

I'd been a bit worried about coachJez potentially not understanding what this year was about for me. It was clear that he knew I was doing IM Wales, but I was pretty sure he'd not taken in the rest of the schedule with any real understanding.  So when he sent me the next 21 sessions of training programme, I replied with an email with the dates of my races so he could schedule for recovery around those. 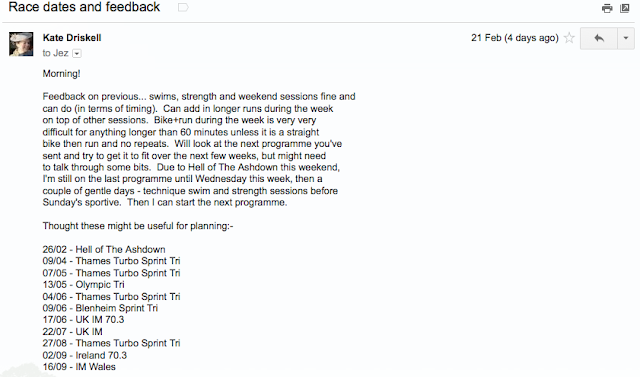 The next time I saw him, Thursday this week for a cross-train session, the first thing he said to me was "You... are nuts!".  And then we had a long talk about my race schedule.  He gets it now.  Really gets it.  CoachJez has trained people for Ironman before, and people who have a couple of long races in a season, usually one near the beginning and then Kona at the end, but not someone who is doing four of the things in 3 months.  So, he's started to get some advice elsewhere on how we manage this so I get through the season safely.  I'm a little bit worried that he's going to go the other way too far with the training, i.e. wind the hard sessions right back in favour of endurance/base fitness stuff and be overly cautious with recovery - he's already said "no training for 2 days after a Sprint, 4 days after an Olympic..." which, OK I know you put a huge strain on your body with a proper Sprint but... not even gentle spinning or jogging for 2 whole days or 4 after the Olympic?  The other thing is that he's gone really heavy on the rolling regime.  I've had to get some mad, knobbly rollers

to use after -every- training session and/or -every- day for 15-30 minutes.  Plus, quite sensibly, Jez wants me to categorise my races as A, B and C so he can work the Cs in as training sessions, the As in as you'd expect and I'm not sure what he's going to do with the Bs.

I'll try to sit back and wait to see what the new programme looks like - coachJez said to throw away the one he just gave me - and trust that he knows what he's doing even though this is new territory for him.  It takes me right out of my comfort zone, though I'm really good at putting all of my trust in professionals, I don't have 100% faith in coachJez(yet).  Probably because I've not seen any results yet, even though I've been training with him for 6.5 months... there haven't been any events to benchmark it.