The joy of spelt

Spelt is lovely.  It's a grain that fell out of fashion a long time ago, overtaken by common wheat in the main for breads, cakes, puddings, breakfast cereals etc.  But over the last couple of years, with the focus on healthy eating and the rise of intolerances and faddy diets, it has started to make a comeback.

I came across it first with Dorset Cereals and their "Tasty Toasted Spelt" muesli.  They use toasted spelt flakes to give added crunch and nuttiness to an otherwise quite soft grained muesli - most mueslis are quite soft textured with little crunch provided in the form of nuts, but that's a different sort of crunch.  Dorset have a really good cereal there and I really do like it.  Onto the scene now comes Sharpham Park with their range of spelt based products; biscuits, pasta, flour and cereals.


"ABOUT BRITISH SPELT
Spelt is a natural grain which was brought over from the Middle East around 7000 years ago, and become common in southern England from around 500BC. A cross between Emmer wheat and Goats grass, it has a distinctive, naturally nutty flavour and unusual and pleasing texture. Unlike common wheat, natural spelt has not been hybridised or chemically altered, and it remains as simple and hardy as it was when it was first introduced. British spelt is versatile, delicious, nutritious, and easy to digest, making it a fantastic alternative to other conventional grains.

There are a large range of products that can be made with British spelt, including bread, pasta, crackers and biscuits, as well as flour for you to make your own tasty creations in the comfort of your own home. It can also be distilled to make beer, gin and vodka, popularly practised in Poland and Bavaria.

As the gluten in natural spelt is soluble, it can be used by people with wheat intolerance or IBS, which can be difficult disorders to cater for and have become increasingly common in today’s society. British spelt has many attributes and benefits for everyone to enjoy, and provides particularly nutritional benefits for athletes, vegetarians and children. Natural spelt is a healthy and highly nutritionally beneficial choice as a sustainable wholegrain for the twenty first century, and will no doubt prove popular in the years to come."


I was pretty interested as I've been dabbling with spelt based cereals and adding spelt flour into breads and malt loaf for a while, so decided to try their muesli. 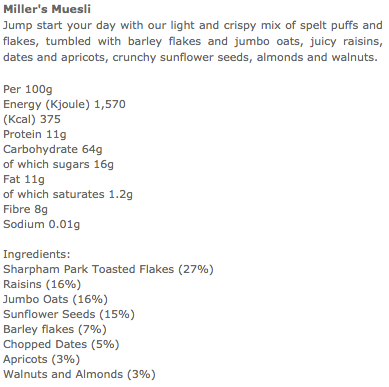 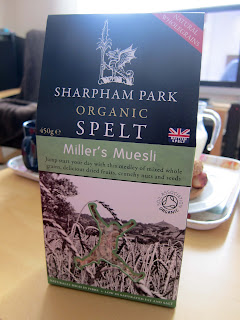 The thing that hit me first about this muesli was the taste.  It is a -lot- stronger and nuttier than the Dorset Cereals one; and in a really good way.  The down side is that based on the description of "light and crispy", I was expecting crispyness and crunchiness, but again compared with the Dorset Cereals one it was softer and most definitely not crispy.  That was a real disappointment.  But, in truth that doesn't really matter.  Putting aside the description, putting aside an expectation of crispiness, this is a really nice muesli.  Where Dorset Cereals have produced something more of a cross-over between muesli and (corn/cereal)flakes, Sharpham Park have produced a really good muesli here.  I've recently been having my muesli with milk and whey protein mixed in and any cereal that can cut through that flavour is pretty impressive in my book.  Sharpham Park Miller's Muesli does just that.

Overall, as a muesli, I think this is the nicest tasting one I've had.  The strong nuttiness of the spelt is very clear as an overtone and the other ingredients are enhancements and extra notes of sweetness, tanginess and a softer crunch.  I'd be happy to replace any other muesli with this and despite it being £3.99 for 450g vs. £3.04 for 560g No Added Sugar Alpen in the "consumer" range of muesli, or £3.99 for 690g of Dorset Cereals Tasty Toasted Spelt in the "fussy bugger" range of muesli, it's probably worth it for the taste.  Plus you know where it's come from and it's produced under the Soil Association Organic standards.

I'm now really rather tempted by the spelt porridge that Sharpham Park does, the only annoying thing is that nowhere I buy food from stocks any Sharpham Park products - hint hint @AbelandCole and @ocadouk!
Posted by TOTKat at 12:48