Because we're new to all this long course craziness, we thought it would be a good idea to get some familiarisation of the first two courses, Wimbleball/Exmoor and Bolton.  So, we signed up for the organised days run by @thetrilife - one at Wimbleball lake for the 70.3 race and one in Bolton for UK IM.

We'd arranged to do the Saturday for Bolton familiarisation but as it was going to impinge far too much on MrTOTKat's birthday so much he wouldn't have had much of a day, so thanks to the flexibility of the @thetrilife team, we switched to the Sunday one.

The weekend came and it rained.  Lots.  Friday was raining, Saturday was raining and the forecast for Sunday was even more rain.  So we drove on up to Bolton in the rain on Saturday afternoon (after my longest scheduled run on Saturday of 2.5 hours at my IM race pace, which was a great run despite managing to throw myself on the ground and badly bruise the heel of my right hand as well as some grazes) and had a rather too large dinner before crashing to bed, listening to the rain.

Sunday morning we met up with the @thetrilife team and the other course delegates - a couple of older gentlemen, another lady and a few of the usual 30-40something guys.  Duncan, one of the coaches, led the presentations and Liz explained that they'd learned from the day before that the conditions of the weather were really not conducive to a safe and useful day, so the agenda was changed.  We were intending to ride 1 lap of the bike course, run a bit to think about pacing, take a look at the swim area and transition and then back for Q&A.  As it was so wet and cold, we had a look at the lake and T1 area, drove 1 lap of the course and then rode 3 repetitions of the one significant hill (Sheephouse Lane) - the guys from the day before said that was the most significant part of the ride so it made sense to take a good look at that - then ran off the bike to feel the starting pace.  It was still really very cold and as I was woefully under-dressed (I'd expected to have put some effort in and got quite warm riding), one of the coaches lent me an extra long-sleeved jersey which was very welcome and took the edge of the cold for the first ride up the hill until I'd warmed up. 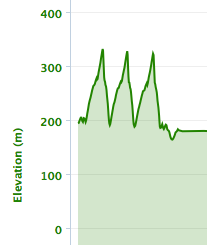 The hill.  It's not -too- bad the first time and descending over some slightly lumpy road surface on the way back down to the start (which won't happen in the race as it's the wrong way 'round) wasn't so scary.  Second time up the hill, the second phase of it was a bugger as it was so windy that the little dip after the first phase gave no advantage up into the second phase that it was hard to make progress against the wind.  Second time back down I was alone, the coaches split between the front group (with MrTOTKat) and the back group who were taking the hill very steady.  Braking on the rough surface in the early part of the descent, I skidded a little to one side and braked a little harder in fear of going over, such that I ended up fish-tailing and wobbling really very badly for around 20 seconds or so before recovering to stable again.  That was pretty damned scary as the bike swung rapidly from one side to the other a good few times, each time feeling like it was going to slide out from underneath me and I'd go over.  But.  I did recover it and once the adrenaline had gone, I felt quite good that I'd managed to keep it under control - I think that riding in the ice over winter helped give me a bit of experience with skidding/sliding. 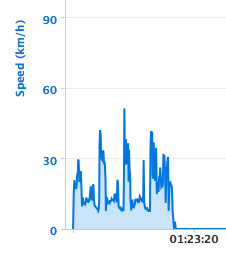 Third time up the hill wasn't funny.  Still very very windy I wanted to swear a lot and loudly as a lot of the effort I was putting in was being defeated by the wind.  One of the coaches was riding up with me again, a different one than the second time (I think 2nd time it was Dan and 3rd time it was definitely Rich) and we were going up in silence, my bike creaking lightly and his a lot more (thanks for that, it makes me far less worried about my frame!).  I crested the hill around the left band bend, turned around and headed back down for the third time... even faster than the second time :o)  I really enjoyed the descent until I caught up with another of the delegates - the other lady - and had to be encouraged to pass her.  I had thought there wasn't much point passing as we were near the end and we'd need to re-group soon anyway, but got on with it, really enjoyed a couple of swooping bends, and we then rode back to where the cars were parked to get going for a bit of a run.


We set off running and the pace awareness work that Rich has had me doing really paid off.  One group shot off with everyone in it except me, and then MrTOTKat and one of the other guys dropped back with me.  Rich was cycling along beside us as we trotted, and explained that the front group was running at 3hr 30 marathon pace - way too fast for us!  Dan dropped back to run with us, leaving Sam with the front group and we carried on at around 06:15/km - pretty much my IM pace.  A little 5km trot, then back to the car and the hotel for the Q&A session.

After a sarnie and a chat, we launched into the afternoon session where Liz went through some really useful mental preparation work, Dan talked nutrition and Rich explained about the final few weeks training and tapering and the team answered lots of questions about the course, logistics, worries and niggles people had and we wrapped up the day just before 5pm.

Overall the day was very productive.  Initially it had been quite disappointing that we weren't going to get to ride the whole bike course and that meant only 1 hour of riding instead of the 4 we'd been expecting, but it was better to be safe, see the whole course from the safety and comfort of the car and experience the one real hill of it.  We both came out of it feeling pretty positive and MrTOTKat was particularly pleased that some of the mental/logistics preparation work he'd already been thinking about was spot on.  Good day.  Well worth it.  And I'd recommend it to anyone signed up for an Ironman race to attend a familiarisation camp before the race.