After the hill reps on the familiarisation day, I had the hardest, longest training session ever.  A 6 and a half hour brick; 5 hour bike, 1.5 hour run.  And it turned out to be a tiny bit longer as you can never be -quite- sure about traffic and pace... 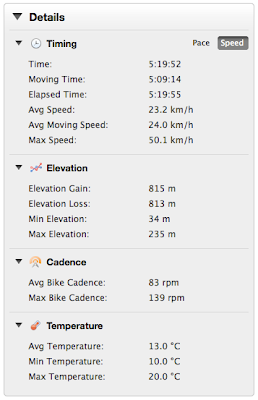 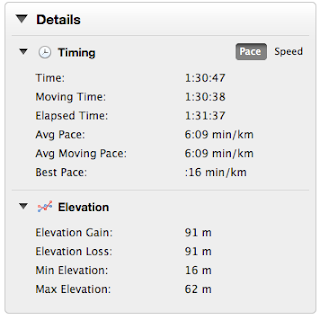 I was due to do 3 sets of over-gearing for 15 minutes but it got difficult due to the terrain.  Firstly, due to the awful road surface around East Clandon, I was just chowing down on a particularly tasty Mule bar, when I hit a bump and 90% of the bar (I'd just had one bite) slid out of the wrapper and bounced down the road, leaving me holding an empty wrapper and a grouchy expression.  Then as I decided to use the first hill to start an over-geared section, it was too high a gradient descent to carry on putting in any effort at all so I ended up with not even 10 minutes for the first repetition.  The second one I started before my favourite hill - Crocknorth.  I think I got about 12ish minutes in to the over-gearing repetition and then hit the hill itself which needed no over-gearing whatsoever.  The third go was coming in to Box Hill and included Box Hill itself, which I left myself in 4th gear for just to make it a bit harder.  Interestingly, I was a bit tired going up Box Hill and actually fancied leaning on my tri-bars, so I did that almost all the way up and it was fine.  In fact, it was really rather comfy. 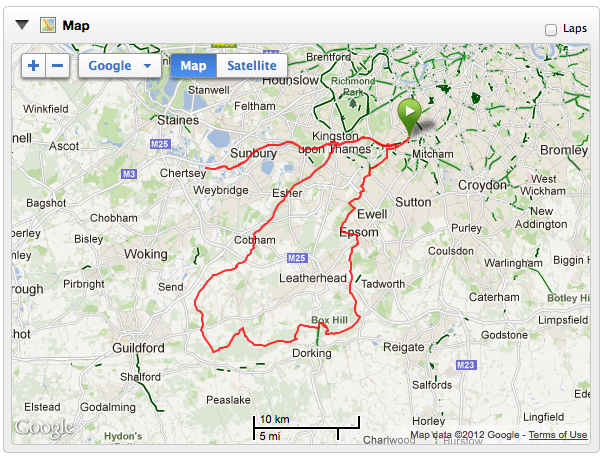 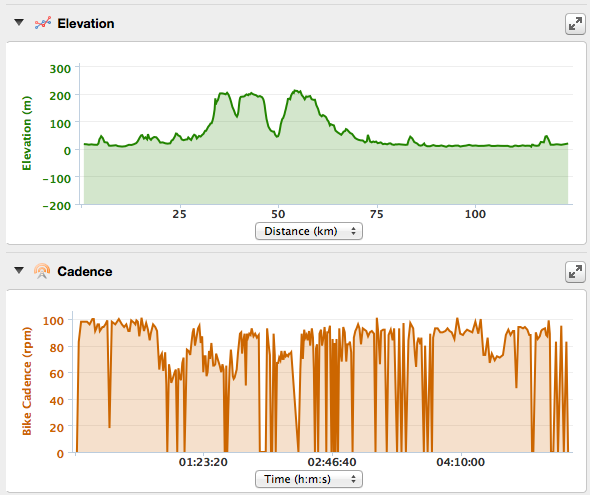 On reflection, I don't think I'm doing over-gearing right.  Or rather, making it hard enough.  I don't know.  It's hard when there's nothing to measure against and I still have relatively little experience at all of this stuff.  I was doubtful enough that I decided to do one more over-geared section while out on the Thames Turbo route towards the end, where I did manage to squeeze in another 15 minutes of it.


I thought I'd done over 125km on the bike.  Mostly because I accidentally hit the lap counter when I was trying to get the display back to cadence after moving the position of the Garmin on the bike and knocking it into a different display that I really wasn't interested in at the time.  Hey ho.  So, it's still quite a long way and the furthest in a single bike ride to date - and with only one wee stop, the longest in the saddle to date.

Hopping off the bike at home, I scampered for another wee (yeah, I think I was hydrated enough despite having not finished the two 750ml bottles on the ride), changed out of my bib-tights and cycling top into capri tights and a running t-shirt as well as out of my cycling shoes and into my favourite trainers and off out for a 90 minute run.

It took a while to settle into a stride that felt OK - I was worried that all the fatigue I accumulated on the ride and the previous two days would hit home and I'd run out of endurance.  But no, this was a really useful run to have in the mental bank as well as physical.  Once I got into my stride, I felt pretty good.  And by the time I got home, I felt like I could have carried on.  It wouldn't have been pretty and I'd've been quite knackered, but I could have gone on.

My IM run pace is around 06:12/km (I think) and, after this brick, I now think I will actually be able to sustain that over 42km on the day.  This brick session showed me a few things, one of which is that yes although there is a certain amount of background fatigue that accumulates, with the appropriate fuelling and a good taper, on the day it'll be achievable.  I was worried that I'd just be really dead in the legs, they'd feel awful throughout the whole run and I'd need to use all the psychological tricks in the book to get to the end of the run course. 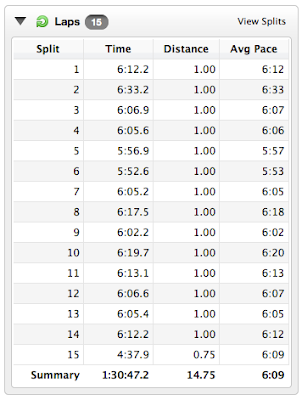 These are my km splits for this brick session and remembering that there is a non-trivial hill in there, that's some quite encouraging data.  And my effort level was nicely consistent...

I must say that I didn't feel sparkling when got home, but after a Recovery XS and a chicken and avocado bagel and a 10 minute sit down, I was fine to trot out to sit in the cinema for two hours.  And 8 hours sleep later (which I really rather needed), ready to get up and go for a 2.4km swim :o)

This brick session gave me a great confidence boost.  Mostly around learning that longer races are a little bit like the shorter ones; once you get stuck into the next discipline, the previous one fades in the memory a bit and doesn't have a huge effect unless you've over-cooked it and/or not taken on board enough calories/carbohydrates.  If you have managed your effort well and fuelled well, you're in good stead for motoring on.  I did 1.38x the 70.3 bike distance (with around half of the hills) and 0.75x the run (with 1/3 the hills).  After a few days of fatiguing myself.  And I feel fine. (and when I wrote this, I'd just done a 2.4km swim and another 1.25 hours on the bike - rest day today!)