Getting a grip - one day at a time

Sunday, I ran a 15km race on a whim.  A friend mentioned it on Facebook a week ago, so I signed up so I could meet up for a bit of a social.  And for the first time in 7 days, I exercised on Sunday and I ran.  I ran pretty darned hard, for me.  Having had no idea whether I'd try for a decent time or just run steady and have a chat around the course, I decided on the start line when everyone else I was with disappeared.  And I decided to bang it out somewhat.

Second lap and started with 05:19 then 05:08 and decided I wanted a drink.  It wasn't that warm, but my mouth was dry so I slowed to a walk at the water station and took a swig or two before trotting off again.  That gave me an 05:34 km which was annoying, but still well under my 05:45 average target.  Long story short; I carried on at the same lick of a pace, pushed through the inevitable brain:body conversation that goes "oh you don't really need to be going this quickly. you could slow down and take it easy. what's the point of this, you're not going to get a quick time anyway, take it easy." etc. responded to by my over-ride of "oh shush, this doesn't hurt. it'll be fun. you'll be happy with a quicker time if you just keep the pace up. stop whining and keep up the effort." etc.  My will won out in the end :o) 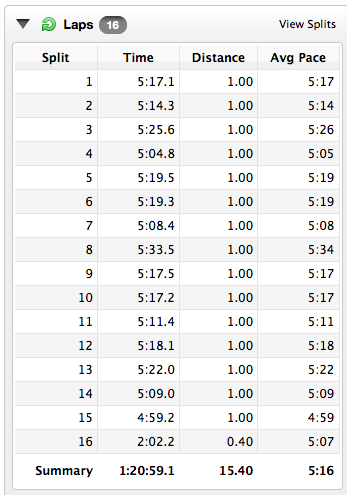 And I averaged 05:16/km.  Almost 30s per km quicker than I'd hoped.  My long (anything over an hour) runs have been all at well over 06:40/km these last months and I was worried I couldn't actually hurt enough to run quickly now.  And the route is so twisty that it slows you down...


3 laps of this is a lot of hair-pins and a good few dead-turns.  Seeing the times staying well under my target was... more than spirit-raising.  Overtaking lots of people doing the 10km route on my second lap was spirit-raising - they started a few minutes before the 15km race wave.  Starting the third lap was interesting as the quite reasonable number of other runners pretty much disappeared.  And the rest of the third lap was a battle in my own head of "who am I racing?" "I don't see any women any more"  "I could ease off a bit as long as I don't lose a place, 'cause I'm not going to catch any women".  And then I saw a woman ahead of me.  Thing was, it could be a woman on her 2nd lap of the 10km race, rather than a woman on the 3rd lap of the 15km race.  And she was running only a little bit slower than me, so she could have been on the 15km race and not paced well, so ran out of steam, or on the 10km race and surging through the course slowly/quickly/slowly/quickly etc.  I decided that as I was gaining on her, that I may as well make the effort to overtake, just in case.  If I'd been able to see her race bib, I would have known the answer; navy blue bib = 10km, orange bib = 15km.  But you can't see that from behind and I was too far away, then behind trees whenever I might have seen due to a twist or turn in the course.  So I overtook her in the last 2km.  And spent that last 2km making sure she didn't take the place back.
Over the line in just over 01:20 and having passed the 10km mark in fastest race 10km time to date I got my goodie bag, medal and quick photo with the girls.  Then off to a coffee shop for coffee and cake.

And there we see some of the problem.

Since the beginning of the month, I've managed only two days where I haven't eaten cake, drunk wine or had both.  Life is pretty intense at the moment.  Lots of new job, lots of travel, lots of MrTOTKat away on business, worry about family, trying to slowly sort out house renovations and worry about training/not training.  And it means something has to crack.

Nutrition choices have been the victim.   Given that the world isn't set up for easy choices that work with my nutritional preferences, at least once a day it's just less stressful to make the choice that doesn't follow my preference or I just really feel the need to have things that are specifically "bad" - cake, wine, cake and wine... so instead of getting even more wound up, I've just been relaxing into it.  Having cake.  Having wine.  Quite a lot of both really.  But it's OK.  No, really, it's OK.  I know it's the opposite of what I've been trying to do the last 6 months, but I'm OK with it.
I'm taking things one day at a time.  I'm OK with the thought that maybe I'll need to re-think my nutrition strategy for UK 70.3, but the thing is that I'll get a steady state test done 2 weeks out and use the data from that to calculate what I need in-race.  It actually doesn't matter too much whether I've regressed a bit on the fat vs carbohydrate burning ratio as long as I know what the numbers are so I can be conservative about how much I take on during the race.  Obviously, I'd like for things to be optimised, but life happens and that's not where I am at the moment.

So I'm taking training day by day and I'm taking nutrition day by day and although I'm really quite soft and squashy (which I think is more related to the fact that my strength training tailed off a lot of months ago and I've not done any for quite a while, rather than the nutritional choices, so I've lost muscle mass) my weight is going down a little bit and I've lost 1/2kg of the 4 I gained in the last couple of months.
And I thought I'd busted my 10K PB.  During a 15km race.  52:57 for 10km, where previous were around 54 minutes, but I found a 52:27 back in 2011, so.  Bah!

But anyway.  Given where I am, how I feel, what's going on and all, I'm pretty pleased.  And I'm taking things one day at a time.
Posted by TOTKat at 22:23