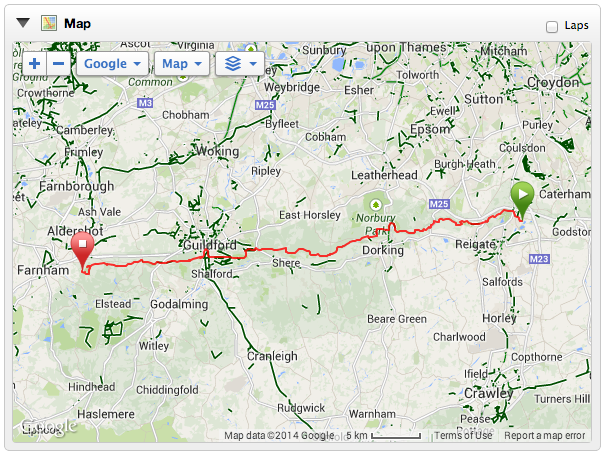 A late, standby entry into day 2 of the Pilgrim Challenge was, for me, supposed to be a gentle little run to get to know a bit more about how crewing for @abradypus in May might look.  How we get on running together was a big topic for me; I simply don't run with others, apart from occasionally at parkrun when everyone's up for a bimble, so running with someone else intentionally for quite a few miles is alien to me and by goodness do I like my time running alone.

The course was reported to be a tad wet, so I fixed my new gaiters to my trail shoes in an attempt to keep the trees and rocks from jumping into my shoes with the mud and making me uncomfortable.  This was a great success and I'm a big fan of them already.

To keep things a bit short, the plan was to follow @abradypus' coach's instructions for the day - run at 100 mile pace until a good way through the race, then turn it up to 50 mile pace and enjoy passing people to the end.  This sounded like a great plan to me, but in the run up to the event I got more and more worried that as she is an actual running person and does actual running training and has been doing that very well and patiently for some time in the build-up to this, this might turn out to be a touch fast for me.  I utterly neglected to remember that it takes a while to recover from one of these events (more so than triathlons as running is simply harsher on the physical bits of your body) and there was only 3 weeks between Country to Capital and Pilgrim Challenge.  As it turns out, that was quite an error. 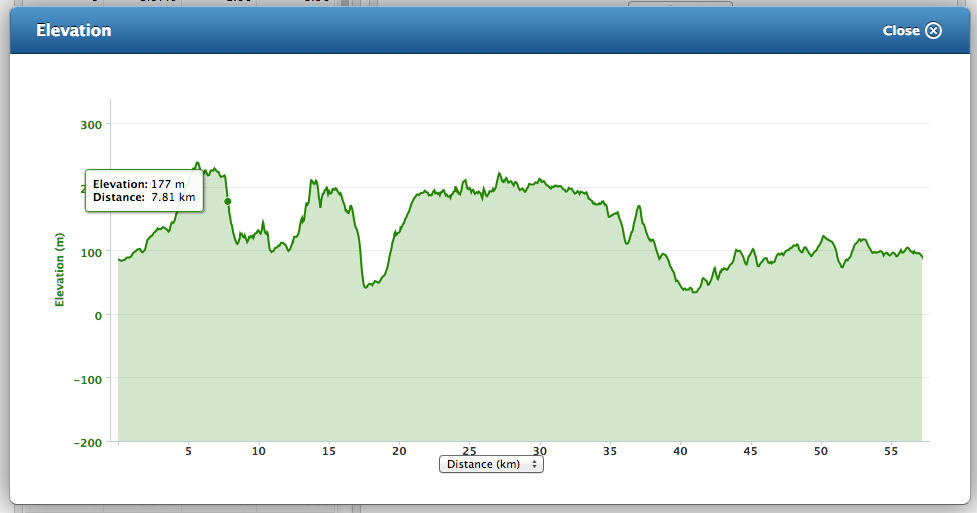 The course was 85% mud, 5% tarmac, 5% sand, 3% firm trail and 2% marshy grass.  Quite a bit more elevation than I'd seen on the GPX file I downloaded - 410m reported, but over 1km measured on the day.  Very very heavy going, and the mud was a different kind of mud from Country to Capital in that it was clay so quite sticky by comparison, but still quite slippery in places.  It was really hard work and about 30% of the way through, having eaten more than I did at Country to Capital, drunk a reasonable amount and not gone off particularly quickly, I started to feel sleepy.  That's often a bad sign; under-fuelling, under-hydrating, hypothermia... but none of those was the case.  I think I was simply just tired - real life is quite hefty at the moment with new job, house stuff etc. and not so great sleep, plus a significant endurance event in the last few weeks, tiredness is very likely the case.

The hardest thing was running at someone else's schedule in a tired condition.  This won't be a problem at the event I'm crewing at as I won't have done anything massive for weeks apart from normal training.  @abradypus was clearly running strongly and had plenty left in the tank, and at the 4th checkpoint we'd said she'd head off at her own preferred pace and I'd get on with it at mine (which would obviously be slower).  And that we did.  Oddly, at the 4th checkpoint I found a second wind and trotted off stronger and more perky than I had been - whether that was being near the end, or getting some salt in on the pretzel I had (I'd had only one electrolyte tablet throughout to that point and the snacks had no appreciable salt in them), I have no idea and don't really care now as it's not important.

Near the end of the route, there was a sign that in my fatigued state I originally read correctly, then lost faith, turned back up a hill and along the marked national trail instead until I came to a rather large flood.  Initially I started to wade through it, having got about 400m along that bit of path until I looked further ahead to see that there was no way a run would be routed through the flood which got deeper and carried on as far as I could see.  I waded back through the freezing water, back down the trail to the sign and found other runners.  I had been right in the first place.  Hey ho.  I squelched off down the road, trotting enough to overtake a few very tired people for whom this was the last mile or so of a 66 mile, 2 day event. 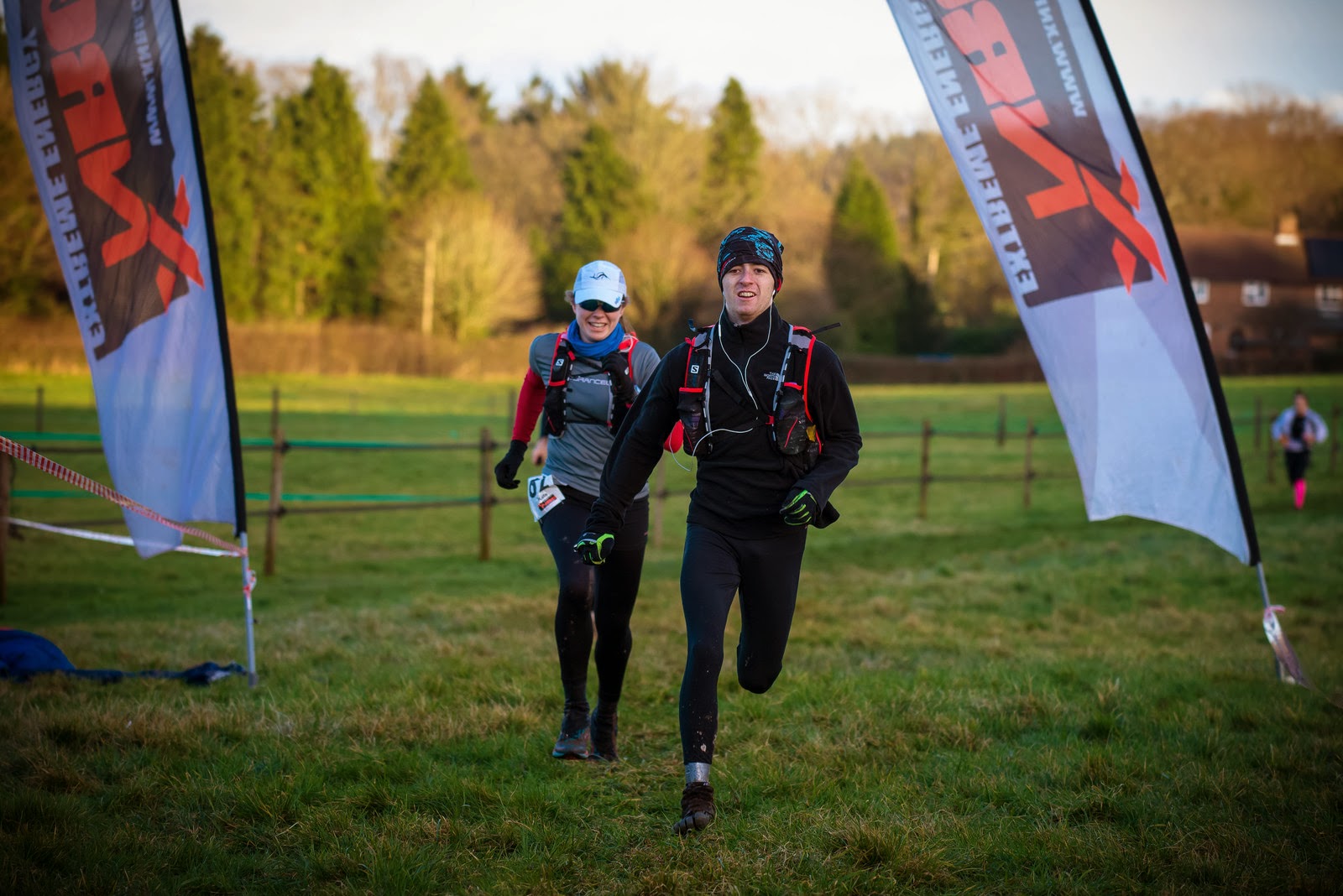 The final turn was into a field, up a slope, along a hedge over some grass and down a slope to the finish.  I put in some effort and then heard someone coming up quickly behind me.  Race on!  I turned it up, only to hear they were still close behind, I ran hard and they were still there a few metres from the line so I sprinted and couldn't go any faster as they passed me in the final metre to take the place.  Gah! 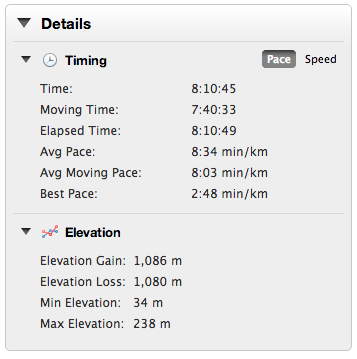 @abradypus had got in over 10 minutes earlier and was looking rather chipper as I faffed and ate some really nice cake.  I think it was a successful day all 'round - I was really pleased for @abradypus and how strongly she ran - and we all got what we needed to get from the event.  I'm not sure I'd choose to run that route again unless it was dry for a good while beforehand, but it was well-run and credit to the event team. 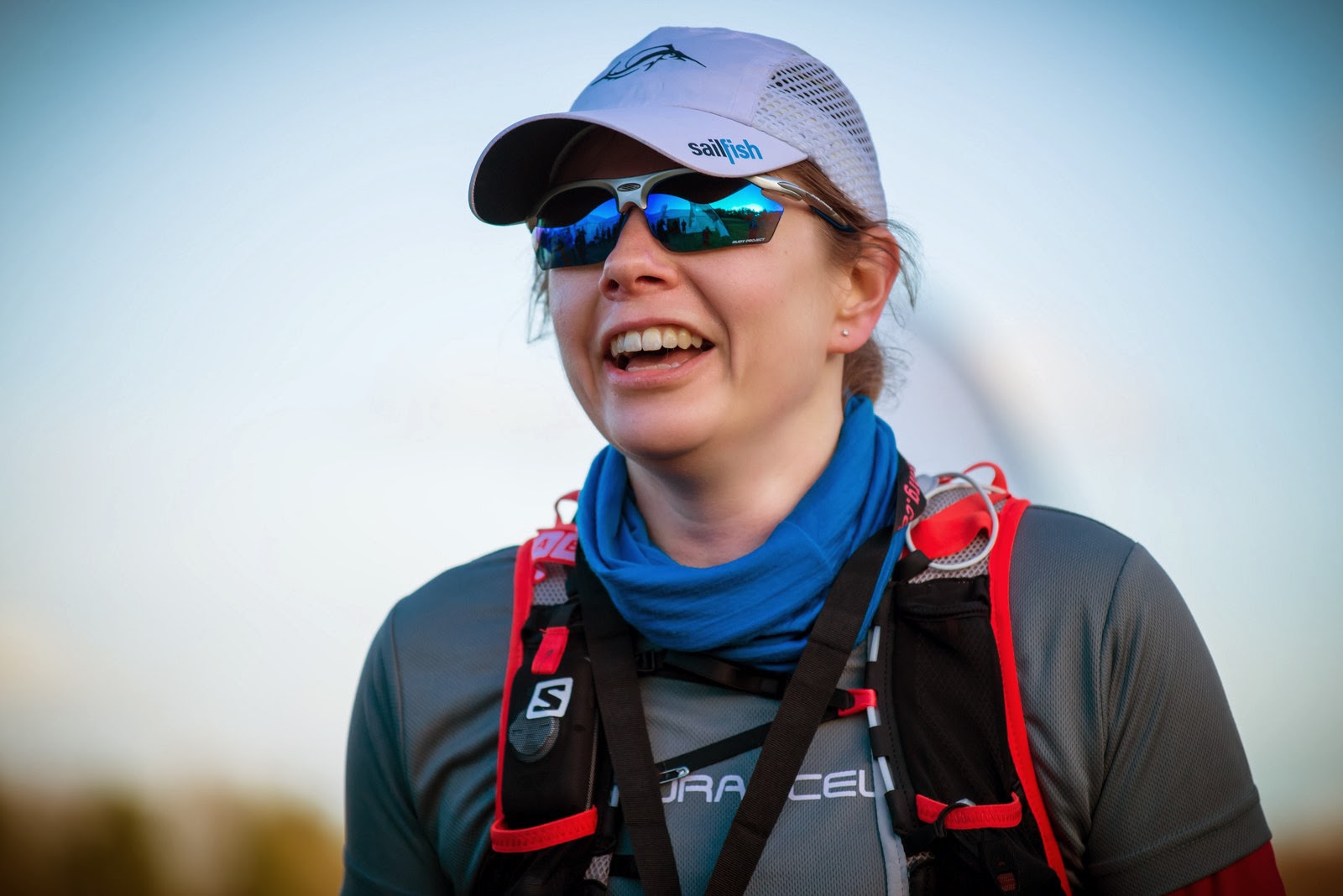