I'm still not sure why I did this race.  I think it was because I didn't want to be left out while Mr TOTKat ran it, plus I didn't want a wasted weekend with no training (er, that's really stupid if you think about it.)

Mr TOTKat had been following Pftizinger & Douglas marathon training plan and religiously going to The Athletic Edge strength & conditioning specialists in Hampton Wick in order to rehabilitate and prevent further occurrence of a knee problem.  I, however, had been recovering from ill-advised proximate Ultra marathons and general training malaise around Half Ironman and Ironman races later this year.

With that in mind, we flew out in Friday night from City Airport to Rotterdam for the marathon on Sunday.  Race registration was planned for Saturday, followed by some sitting around and then Mr TOTKat was doing the "mini marathon" (a 4.2km race to sharpen up for some, and for others an introduction to running races at all).  I planned to do a 20 minute leg turn-over while he was racing. 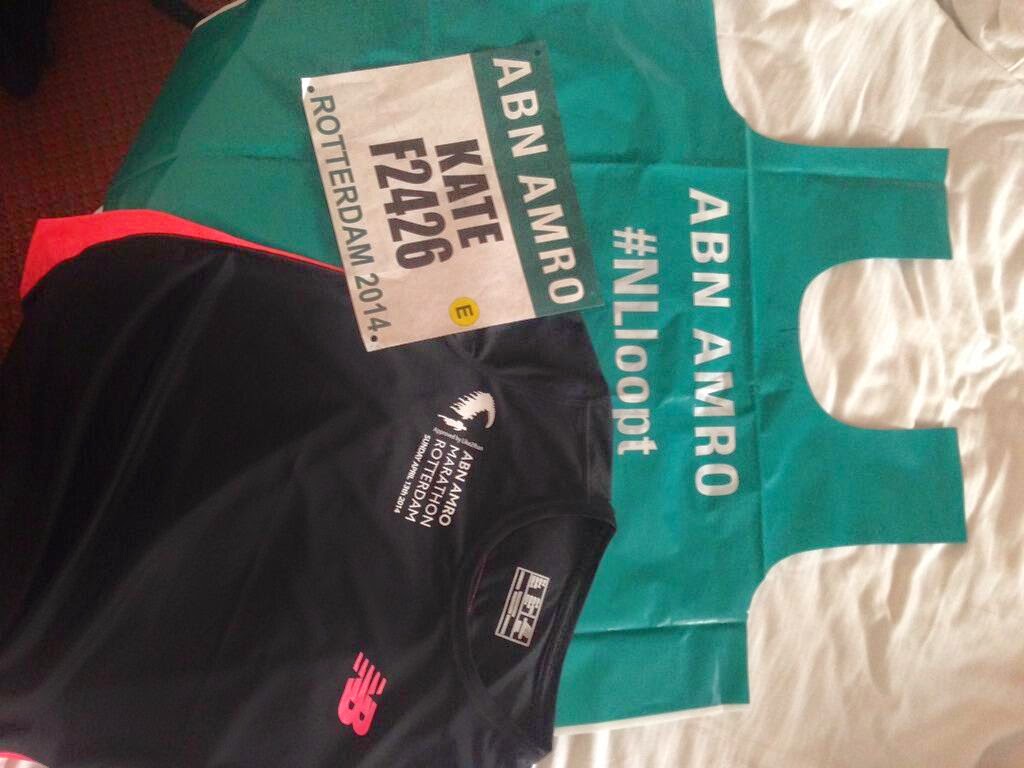 The race expo was quite nice really, the sub-title sponsor was New Balance and they had some pretty nice kit for sale on the day as well as a really nice race t-shirt for all of the marathon runners.  We both ended up buying some kit and I even ended up with some really bloody lovely shorts and tops that were endorsed by some model or other... shame it wasn't Nell McAndrew who's actually a pretty fierce runner with some damned sharp PBs right up to marathon distance. 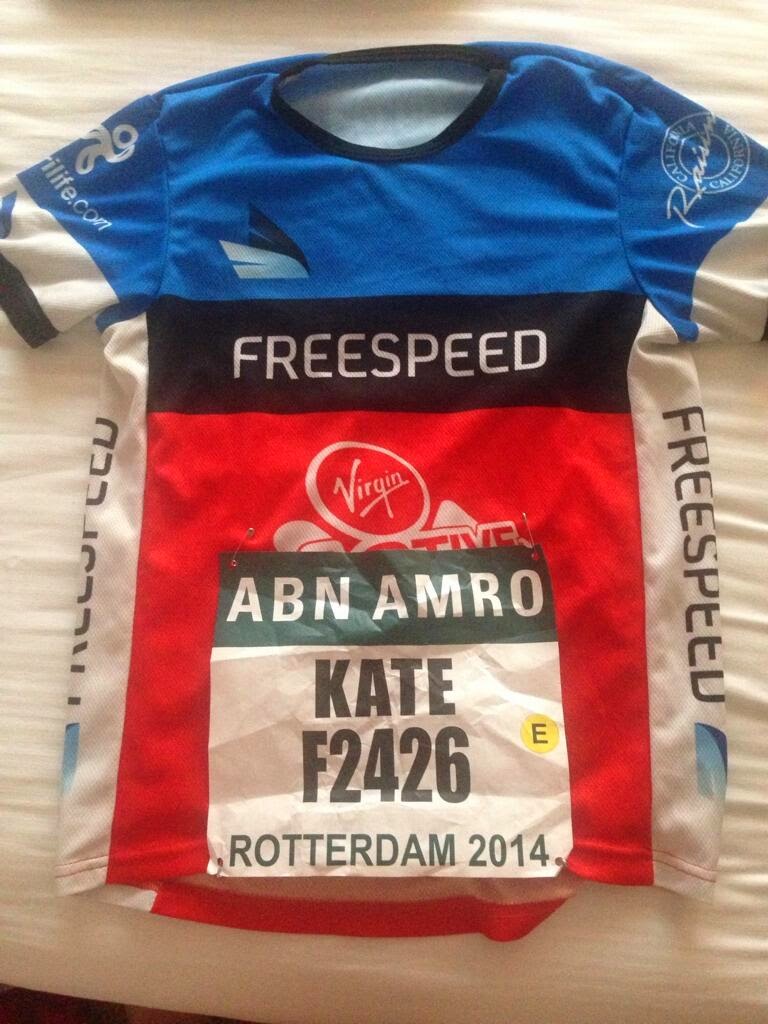 Race day came and I still wasn't really sure what I wanted to do as a race strategy.  My predicted time I set in Training Peaks a while ago was 4 hours 20 minutes.  I can't remember why I picked that time, but I then decided on the day that I'd run at 6 minutes per km from start to finish, which would give me a 4 hour 13 minutes and change overall time.

I went off too fast. 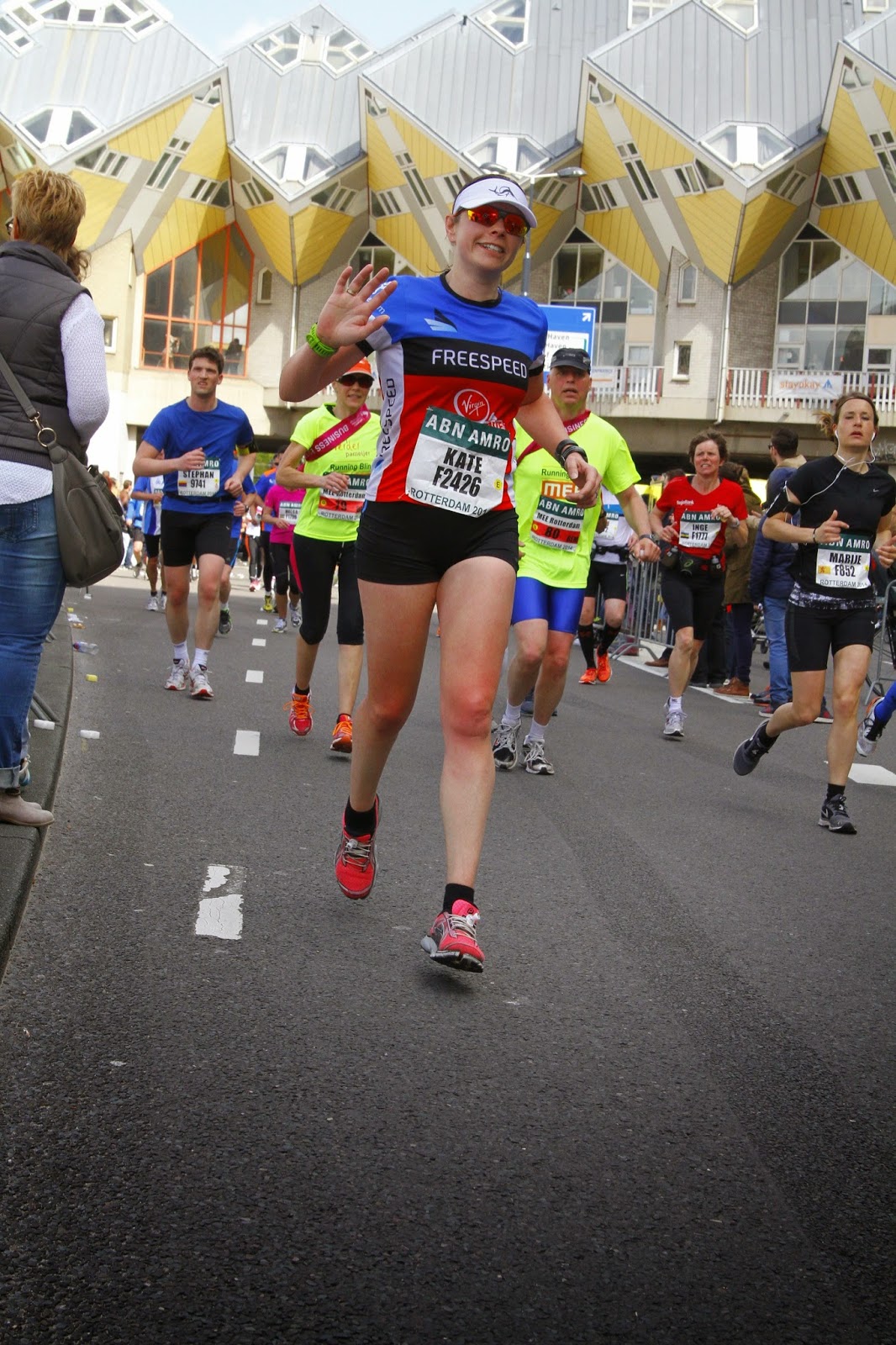 The thing that is often said about appreciable distance races is to start off feeling easy, even too easy.  And I thought I had.  I felt good at 05:30/05:45 per km and I put it down to it being the flattest run imaginable and on tarmac rather than off-road and on uneven surface.  This was phenomenally smooth tarmac.  So I thought I was OK.  5km came and went and I felt fine.  I was high-fiving all the kids who had their hands out (it's the Done Thing!), waving for every camera I saw, dancing at every band along the route.  10km came and I had a hot spot in one shoe, so I pulled over to one side to adjust my sock to see if it was related to a bit of bunched up material.  And it went down-hill from there.  I noticed it was difficult to start back up again and then I couldn't get back to that 05:30 to 05:45/km pace.  I was hitting 05:55 - 06:05/km and even that didn't feel as easy as the faster pace had before. 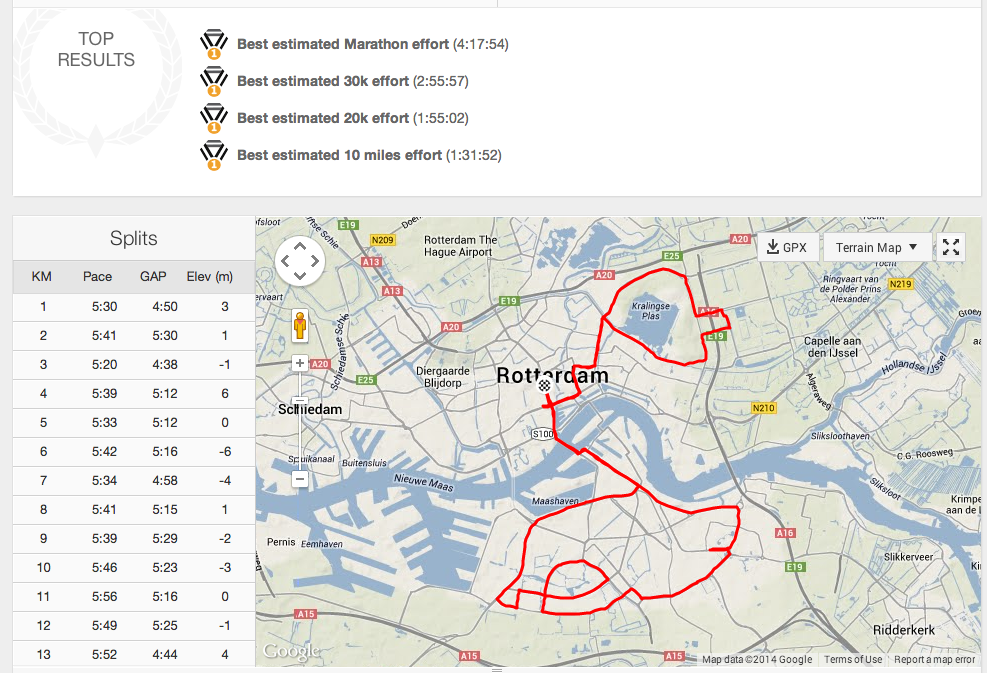 I don't remember much between 10km and 18km but a key point was at 18km when it felt like my mind gave up.  I knew I'd screwed up.  I wanted to find a short-cut back to the start/finish and sack it all in.  I'd just done exactly what you're not supposed to do.  I'd gone off too hard and was starting to pay for it.  This has never happened before.  Every time I've done an Ultra marathon or even the shorter races, like the Malmesbury Half or the Clapham Common 15km races I've been praised for my evenness of pacing and very frequently put in negative splits.  So this hit me like a brick in the brain and that on top of this race being fairly meaningless to me in the scheme of this year (just a "fun run" really), it meant I had no purpose and nothing to prove, so... 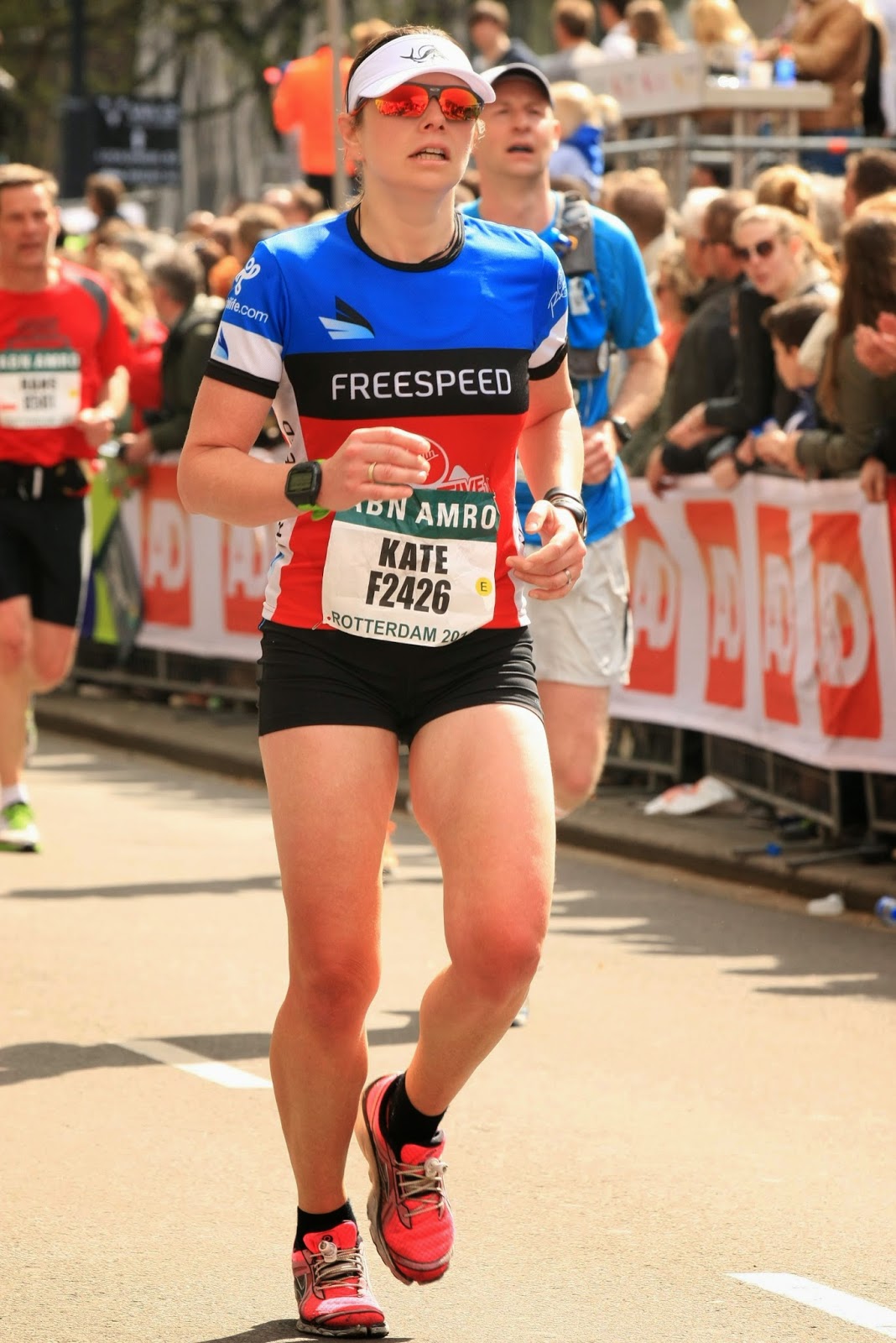 Well, what was the point?  The only thing that kept me going from 18km onwards was the fact I was unable to work out how to short-cut back to the start and pull out.  And I was not going to wait for the bonk wagon as we had a plane to catch at 7.30pm!

Well, OK, time to man up and get on with it.  I tried to keep my heart rate up at a reasonable level as I figured the quicker I ran, the quicker I'd get to the end and it all be over.  Then I just ran out of everything and at 30km thought about run/walk.  My quads and calves were vociferous.  Seriously chatty about their state of unhappiness.  And from about 35km to 39km I made a deal with myself that I'd walk for 30 seconds at each kilometer marker and then run until the next one.   This is a strategy I used at both Country to Capital and Pilgrim's Way when Louise ran on ahead at our parting point.

And then I wasn't allowed to walk any more.  I had just started walking at the 39km marker and another runner grabbed my hand and pulled me along to run again.  Argh!  I so do NOT want to be running, I craved my little walking break and I'd been robbed!  But I kept running, with quads, calves and hamstrings now joining in the cacophony of pain signals to my brain.  I wanted to cry. 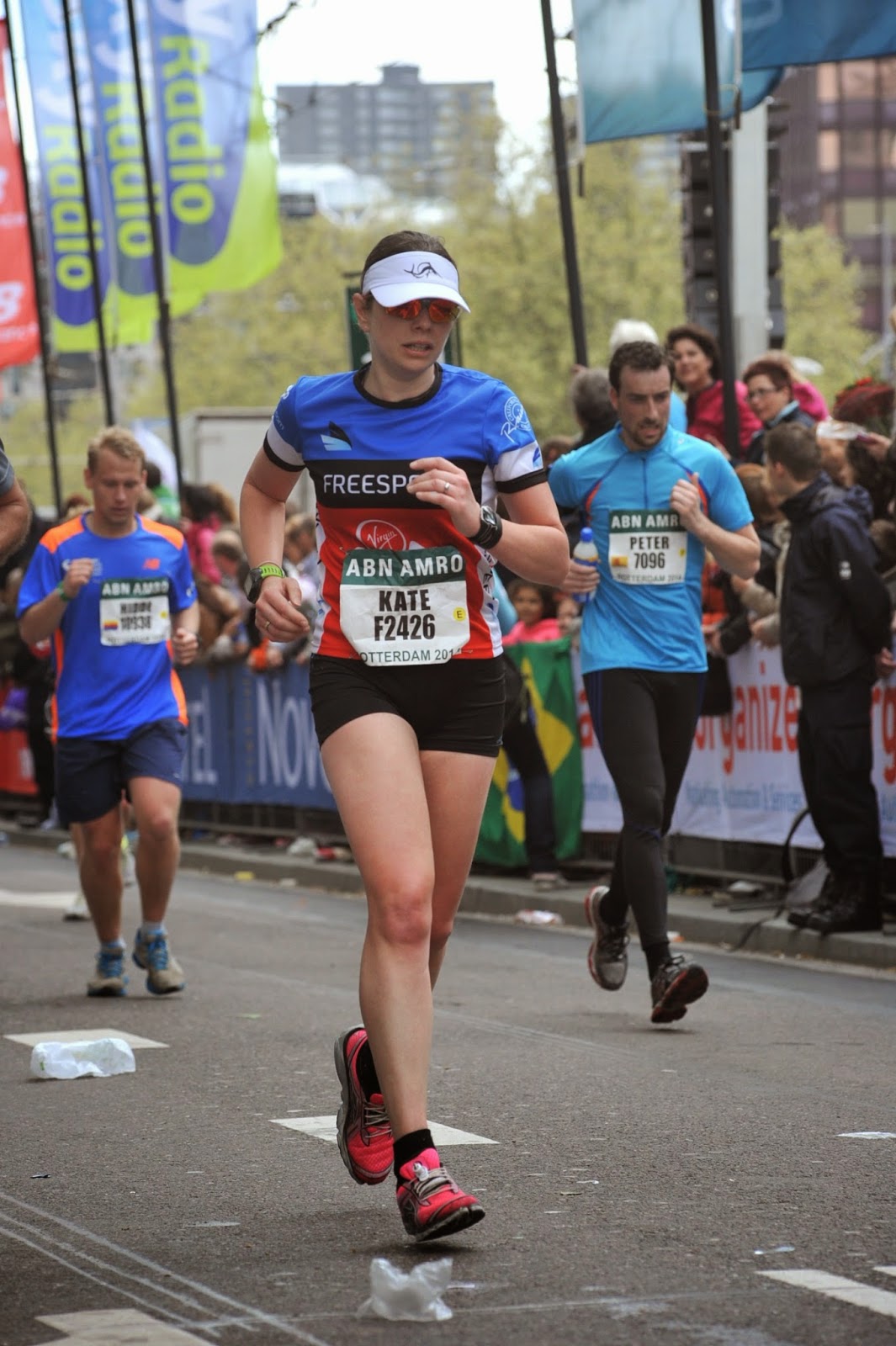 The supporters lining the route would not let people walk.  I think they thought it was supportive, but I found it oppressive.  Watching poor buggers, who really wanted to be walking, being pretty much emotionally blackmailed into running again even for a few steps.  I couldn't cry because the crowds were now so close in the final kilometer, all I could do was hyperventilate crossed with wheezing like a dying donkey (like I used to get in some kind of panic attack when I used to freak out about really steep hills on the bike).  It took quite a lot of energy to calm that down enough to breathe more normally and get through those last 1000m. 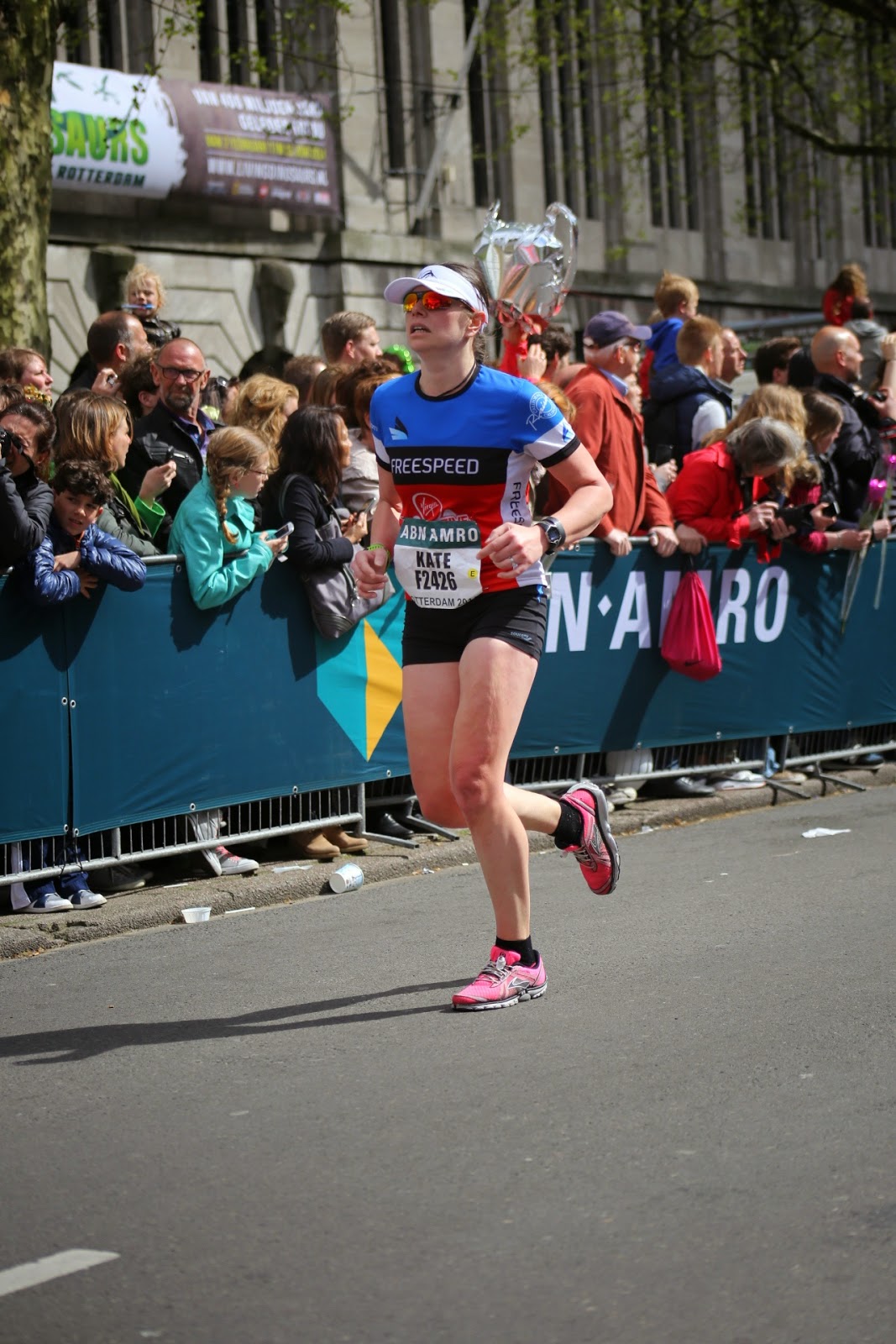 And the finish came. 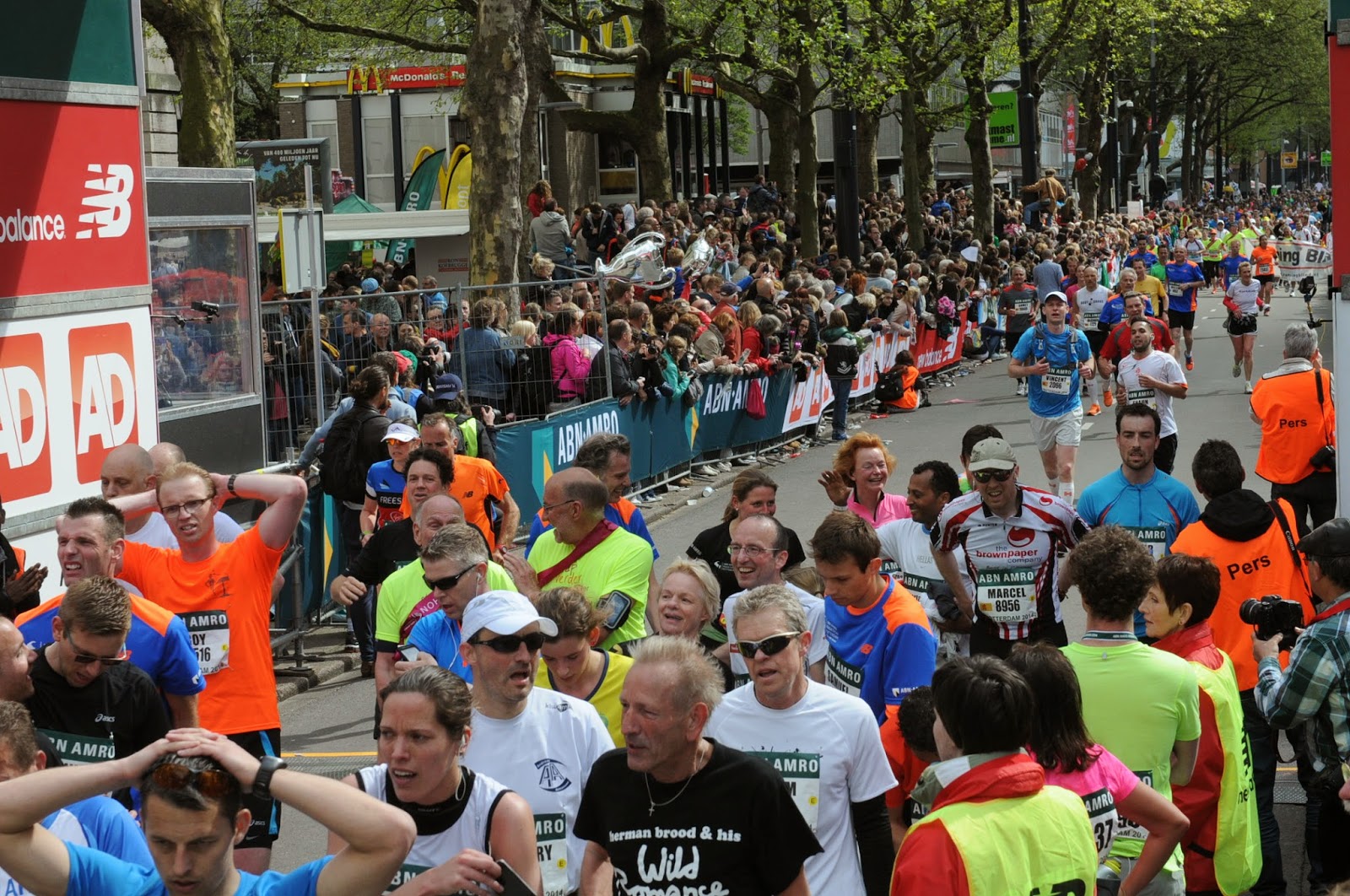 And all I wanted to do was cry.

I felt terrible.  There was no medals and no water.

Where were the medals?

Where was the water?

Why were people trying to give me a stupid, cheap rose in a plastic tube? 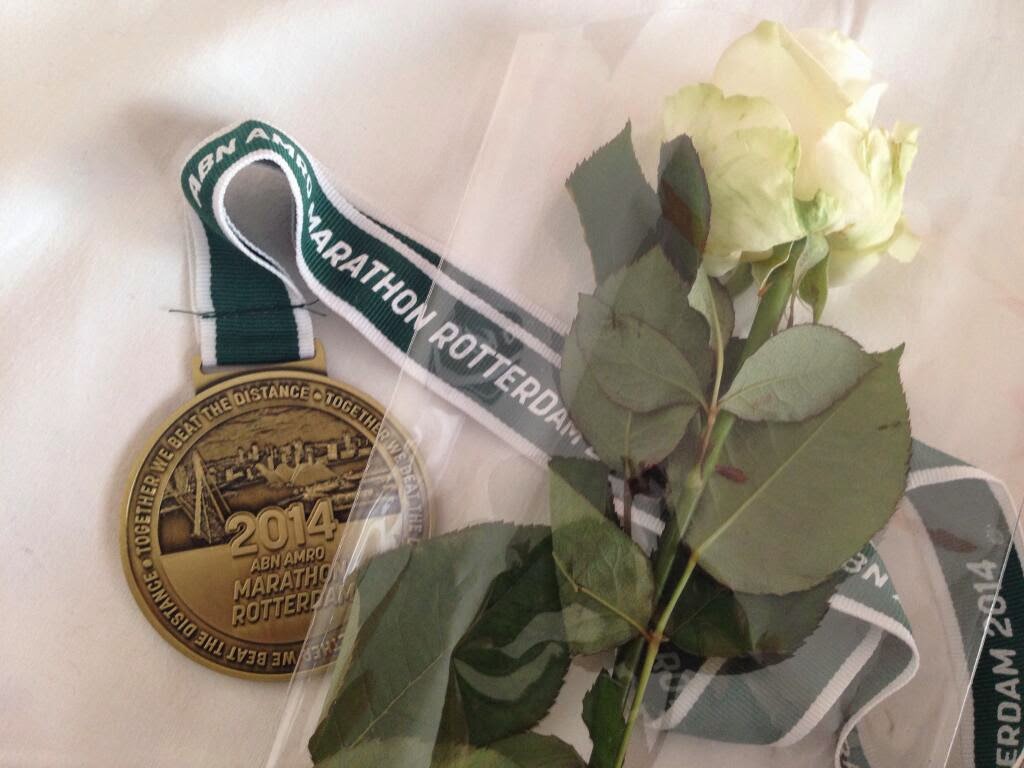 Then I was confused by the first guys with medals as they were for the business relay teams and were handing people 4 medals at a time for the whole team, but I couldn't find the "normal" medals.

It was confusing and stressful and difficult.  But then the individual medals turned up and I got mine, but there was nothing to drink and I so wanted water I was shuddering with tears.  I found people handing out cups of sports drink, but I wanted water.  This post-finish line chute was so long!  It looked like it veered off to the right, but I was vaguely aware I wanted to go off to the left to get back to Mr TOTKat and the hotel and I did find an exit route in the fencing; but still no water!  (it turns out there was a load off on that right hand bit I didn't walk through)  I stumbled back to the hotel, crying and angry with everything.

I hit the time I'd predicted for the race, whenever I'd predicted that many weeks ago, but I'd done it the wrong way.  The final time wasn't important and I must say that everyone asking me about it since has irritated me, I know they mean well, but the time really really was irrelevant to me, despite the fact I was accurate to within 3 minutes with my prediction.  But I felt horrible.  Truly broken in the head, upset, in a dark place and in pain.  But we had a plane to catch in about 90 minutes.

We didn't catch that plane.  We postponed to the next morning and got an extra night in the hotel.  I was just so convinced that the food choices in the airport, for our first food since breakfast that day, would be just upsetting.

I'm sure the Rotterdam marathon is a nice race, but it wasn't for me in so many ways.
Posted by TOTKat at 21:25