It's been a while... and I've aaaalmost managed a green week this week.  (All planned sessions completed and as planned).

I missed it by a whisker by deciding to only do 10K at Clapham Common today rather than carrying on for the 3rd lap and 15K.  I had a target of 1 hour 20 minutes to beat to PB the 15km route, which meant a pace of 08:30/mile to hit that target.

I was really happy up to the 6th kilometer mark as the time I had on my watch meant that I was bang on target for that pace.  Then I convinced myself that I was dropping off pace dramatically at the half-way mark and gave up.  Phoned it in for the 2nd lap and retired after 10km instead of pushing on to 15. From the data I now have afterwards, I see a slightly different story and I just couldn't do sums under pressure (no change there - running makes my arithmetic get Special).  My pace wasn't as quick as I thought it was.  Averaged 08:48/mile for 6.2 miles on a very twisty course with a good few dead turns. 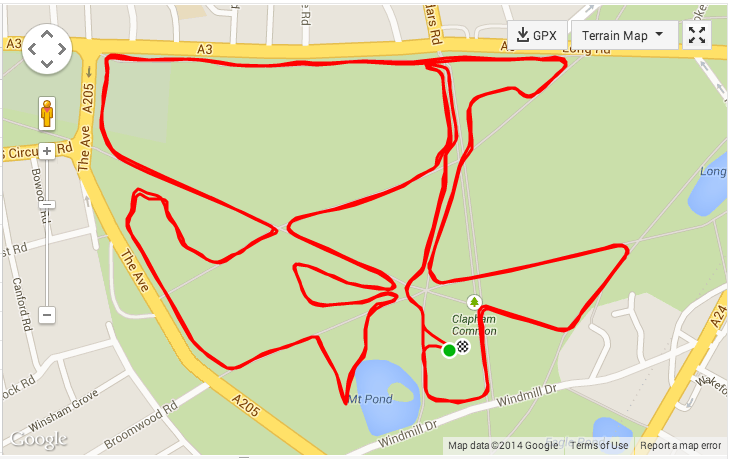 A bit annoyed with myself as I really didn't have any drive for this race.  I didn't manage to make it meaningful and I went into it convinced I didn't have the pace at the moment to hit a PB that I set last year.  So, clearly, I never was going to with that attitude.  Hey ho.  No biggie.  It's not my goal at the moment to be quicker at shortish things.

Consistent training though, so I'm very happy with that.  And next week looks like it's going to be fun.  Starting with an actual rest day on Monday after 11 days of consecutive training (not all running), and culminating in back to back 13.5 mile runs at the weekend (that look like they'll actually be more like 15 and 14.5 mile runs due to routing & railway station locations - probably Maidenhead to Staines and Staines to Kingston along the Thames Path).  That'll bring me to 43 miles of the 184 mile route recced; with full pack as planned so far.

We're 5 weeks out from Round Ripon (35 miles) and 7 out from my Thames Path tour.  More weeks like this week and I'll be well set up for both.
Posted by TOTKat at 15:27