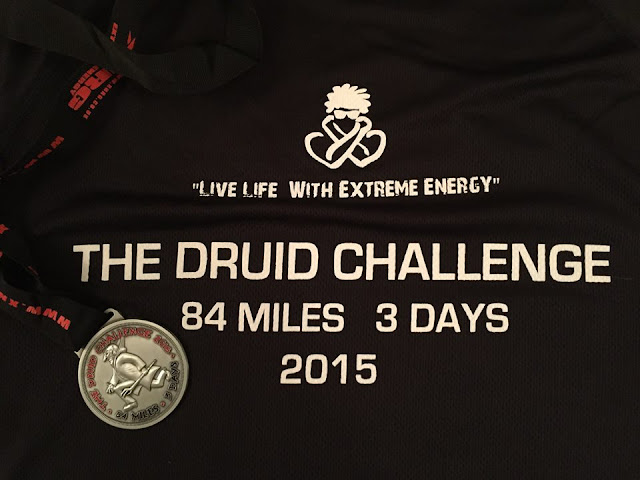 The Druid Challenge is a 3 day stage race (on foot).  84 miles from Ivinghoe Beacon to Swindon along the Ridgeway National Trail.  It's run by XNRG who organise quite a few multi-day ultras through the year; ensuring they're at least 26.2 miles on any given day with individual day entry so each day counts as a single marathon for those aiming to enter the 100 Marathon Club.

I decided I "needed" to enter a real multi-stage race, having had a go at a self-supported 6 day run along the length of the Thames Path last October.  I really enjoyed that and it would be a nice easing back into the land of ultra marathons with a 3 day stage race of less average distance per day than I covered on my Thames Path run.

The week before the race, I had mostly pretty awful runs and wasn't really feeling it, so I decided to stay in a hotel near the start so I could have more sleep rather than taking the train up to Tring on the morning of the race.  I stayed at Pendley Manor (which is over-priced and shit, by the way) and got a cab to the station where there were shuttle buses to the farm where registration was happening.

Day 1 is the longest day and the latest start time of the 3 days.  I'm guessing that the 10am start time for those who would be walking is to allow for folks to get a train to Tring from a reasonable distance away, get registered and sorted out and up to the start, rather than being forced to stay overnight nearby.  But at almost 30 miles, starting at 10am if you're walking, or 11am if you're an average runner means you're definitely finishing in the dark and it's pitch black on the trail at this time of year at that time of day.

Anyhoo, I got the shuttle bus to the farm having met a lovely lady called Viv who had recently covered the Camino di Santiago, and registered in a grain shed.  A couple of cups of tea later and some chatting with a couple of Spanish hikers who were looking forward to their first official ultra race (which they were entirely likely to be covering with quite some efficiency as seasoned hikers), and it was time to head up to the start.

We were briefed on safety and the race philosophy - it's a challenge, fun/enjoyable, and be safe - and then walked up Ivinghoe beacon to the start in quite a chilly wind and up a very slippery chalk path which we were going to turn around and run back down again along the start of the Ridgeway path.

Neil, the race director started us off with a countdown from 5 to 1 and off we went.  And immediately my legs pretty much said simply "piss off".  And my breathing was laboured right from the off, despite not that much speed being involved.

The profile of the route today looked like it was one of the tougher ones as well as being a bit long, so that made me feel even worse, mentally, given the state of my legs and engine.  It felt like I was pushing way too hard, or wasn't warmed up, but the pace was pretty sedate.  It took around 25 miles to warm up in the end and I only felt reasonable with 4 and a bit miles to go on the final stretch.  There was a lot of sliding sideways on slippery mud on this day, and I wasn't the only one who was pretty frustrated by that and a bit cross on a good few occasions.

There were some pretty cool sections, running downhill through leaves in the woods, skipping past folks who were a lot more tentative over that terrain.  It felt amazing.  At one point in the woods, I was almost by myself but a blonde lady was just in sight ahead of me.  She was going to take a straight on into a farm, where I though there was a gap in a fence where the trail went, so I called to her that the route went through the fence (which it actually did).  I recognised her voice straight away as the melodious tones of Niandi Carmont (ultra runner and podcast guest/partner of Ian Corless on the Talk Ultra podcast).  She was so encouraging and supportive throughout the 3 days of the race, and we had a good few chats in the evenings.  It was great to meet so many lovely people over the days (and some familiar faces too), but it felt like we got on really well and it's a shame I'm not likely to see Niandi again (mainly because I'm rubbish at that sort of thing).

By the time I got to the final check-point I thought I might just make it to the finish before sunset, but in the end I was about half an hour short of that and ended up using my amazing head torch (which was a Christmas present a couple of years ago).  The final stretch was a good few miles along a dark trail and then along a couple of roads.  My legs and body had decided to behave themselves by then and I felt a lot better, like I was really motoring (which I wasn't, but at least it felt like I was) into the finish line.  Day 1's running over with I went into a very dark place and wasn't sure that come the morning I'd start the next day with the other runners.

A hot shower and a nice dinner might have made me feel better at this point, but the showers in the school we were staying in were cold, and dinner was pretty uninspiring dry chicken breast in a runny sauce with some boiled veg.  OK, my dietary preferences aren't exactly mainstream, but still...

HOWEVER, the race organisation was good! The checkpoints are well-stocked and I did have 1/4 of a Marmite sandwich and a few mini-cubes of Rocky Road during the day which was what I wanted at the time (especially the Marmite sandwiches :o) ).  The medical care, especially the lady who took care of everyone's feet who had any problems at all, was fantastic.  I had ignored a bunched-up sock on my little toe all day and created a spectacular blister that she drained & taped up for me so it was protected the next day.

29ish miles done... time for sleep and see what the next day brings. 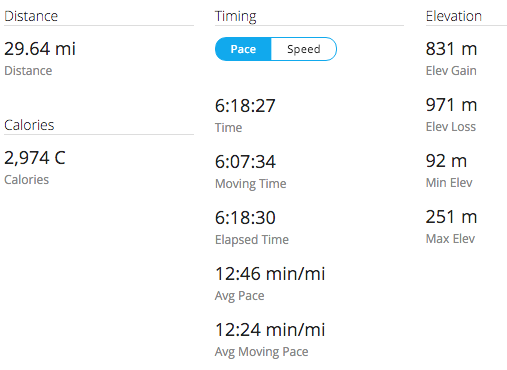