I'm really very pleased with the technical improvements I've been making on the bike and run over the last 3 weeks.  Now, I can reliably drink on the bike, in the saddle, sometimes even while pedalling, and from either bottle rack.  I can eat too.  This is going to be invaluable for the longer races this year.  Running-wise, I'm starting to get to grips with pacing.  I'm still not anywhere near there yet, but generally more aware of paces and how they feel.  There are doubts in my mind whether I'd be able to stop relying on a GPS enabled watch to really get it right in a race, but we'll see.

This weekend's training has been tough in the heat.  Can it be a bit less hot in 3 weekends time please?

Saturday was a long bike and a brick run.  I intended to do about 03:30 on the bike, pick up some running shoes back at home, then cycle another 30 minutes to Prologue bikes to drop my bike off for a service before next weekend's Bolton familiarisation weekend (and UK 70.3 not long after that).  Then run back home for 40 minutes or so as a brick run.

The ride was my old familiar 3 Surrey hills, 2 of which I formed part of two of the intervals in the main set to hit 65rpm for 10 minutes for some over-gearing work.  It was *HOT* and *WINDY* and for the first time I did the route without stopping at all.  Thankfully, the traffic down to Sheen to the bike shop wasn't as horrible as last time I went that way, but when I got to Prologue, it was shut!  A one-off they say, so I went a few doors down to Pearsons and appealed to them to help.  Come Friday I should have a bike that doesn't creak in random places.

I started the run home and, in case I'd not already said, it was really very hot.  I struggled to keep pace up at all.  Also, I forgot to turn on my Garmin for the first minute or so - another sign that I'm mentally quite tired as I've been making a lot of mistakes and getting mixed up in the last few complicated training sessions.  Intended that the 1st km was easy, but then I just couldn't increase the pace at all after that. The little undulating hills didn't help for sure.

I stopped running after the planned 40 minutes and walked the next 15 minutes to Paul in the village.  As I was craving "real food" after the bars, sports drinks and gels, I bought and pretty much inhaled a chicken baguette (can't remember the last time I had a baguette!) on the way home from there.

Today was a recovery run with some "pick ups" in there (30s sections of increased pace to get the feel without the fatigue of a fast run).  I went back up to the common to run in the trees to get as much shade as possible.  And yes, I'm definitely quite fatigued in the brain.  As I headed into a trail section from the main gravel/soil track, I tripped over a tree root and didn't realise I was falling until I hit the ground.  Covered in dusty mud and a bit scraped for the rest of the run, I really had to concentrate hard on not letting that happen again. 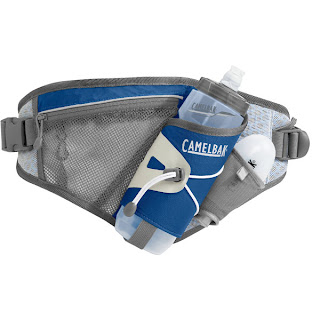 Anyway, I really enjoyed the strides/pick ups, which I started to do after 30 minutes of warm up and then roughly every 5 minutes after that for the next hour and 15 minutes or so, then had to knock it on the head coming back down through town as there were a lot of people on the street.  My Camelbak run belt is probably the best running purchase I've made this year (last year was the emergency baseball cap I bought at the Virgin London Triathlon and it meant that I could have a bottle of iced water (fill to 4/5 full of cold water, then top up with an entire tray of ice cubes - OK, they rattle a lot when you're running, but it's well worth it for the chilling effect) with me today and yesterday.  Today I was pretty disciplined with hydration and sipped every km and refilled about 200ml from the public fountain to get me to the end. 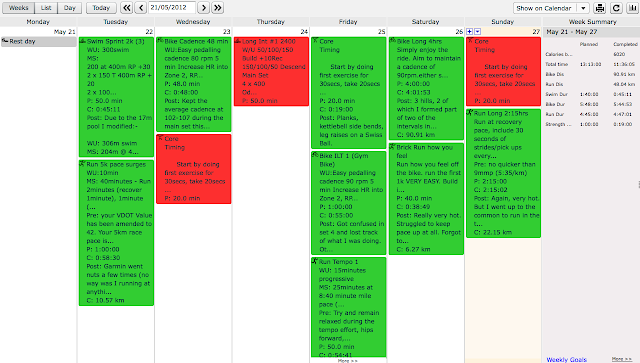 I'm glad I've got these sessions in the bank but oh-boy was it a tough end to the week!  (And I hope to tidy up that last core strength session today, so I'm not totally remiss on that front.)
Posted by TOTKat at 15:27