Second race of the season and my new TT bike

It's upon us already; the second race of the season.  And like the first one it's going to be cold and potentially wet too!  It's going to be an even earlier start than last time as transition closes at 06:15 on Monday (the race director will be on site from 04:30!!)

I'm a bit excited, but not so excited that I'm even thinking about racing on my new baby when I've only just picked him up:- 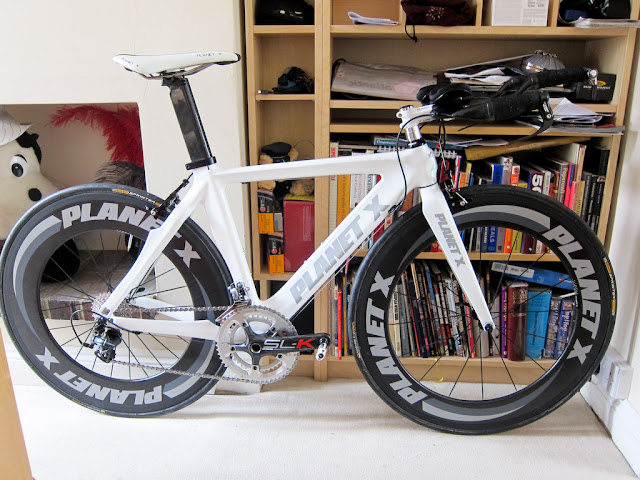 I call him "Stormtrooper" (thanks to the new chap at Triathlon Zone for putting that idea into my head :o))

I'll be racing on my usual Fuji Team Pro Special Edition now that the guys at Prologue Bikes have made it feel right again.  I had it in for a full service at Evans a couple of weeks ago and it came back with a rattle at the back end, which we thought we'd fixed after taking the cassette apart and putting it back together again, but the rattle came back.  One of the guys at the Wimbleball familiarisation weekend we went to, one Sam Baxter, recommended a shop in Sheen so I went and found it this morning.  Turns out they're really nice guys.  They stripped down the cassette again, found that two spacers were missing (one that came with the wheel and one that came with the cassette), replaced them, adjusted the slightly out of whack back wheel, the rear and front derailleurs and didn't charge me a penny!  All rattling has stopped and I feel confident throwing the bike around the road again.  Much much happier about racing on it on Monday now!
Posted by TOTKat at 16:21