I'm not racing tomorrow after all.


The tickboxes for the race were being able to have a good crack at going quickly and have a go a beating last year's time, while managing risk on the bike leg.  Not sure I can tick either box after an incident on Friday on the course where a bus went under the main pedestrian bridge from the outer palace grounds into the main athlete transition area, that was over-height and damaged the bridge.  It's the only route through to transition from outside the race and is unusable. 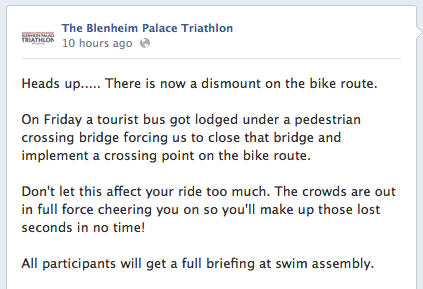 So the race director has implemented a marshalled mandatory dismount zone on part of the bike course where the bridge crosses the bike course and pedestrians/spectators need to cross the bike course.  All athletes have to slow down, stop, get off their bikes, walk 10m, get back on and carry on around the bike route... 3 times each in the race.  I've seen race footage and it looks bloody awful.  At any given time there could be a good 400 athletes on the bike loop which is about 6.6km long and as the race is started in waves there are cyclists on the course who are on any of the 3 laps... so at any time at the dismount or re-mount line there are 10-15 cyclists in the least stable state of getting on/off/tottering about in cycling shoes.  That, plus the fact that the race attracts a high proportion of first-timers there's a good 75% of the field have never raced before or have certainly never raced where there are a lot of other athletes in close proximity.  I'm not sure what other option the race director had, but there are going to be a lot of athletes turning up to today's and tomorrow's race waves who won't know until they get to the swim briefing.  There's going to be a lot of cross people and perhaps offering to allow people to withdraw and get at least a partial refund would have been a good gesture.

Basically, sod that.  I'm not having someone ride up my backside or stop/wobble/fall off right in front of me and cause me to crash; it's bad enough having that risk at the start and end of the bike leg, but adding in 6 instances of it during the race?  Also, slowing down, stopping, getting off, walking, getting back on and then starting up again on one of the quicker parts of the bike course not once, or twice, but three times during the race will add up to minutes to the overall race time.  Where personal best times are often measured in parts of minutes, that's just no fun any more.  Most people aren't racing the rest of the field, they're racing themselves.  I'd've been doing both.
Someone has taken short videos of the area from today's racing...