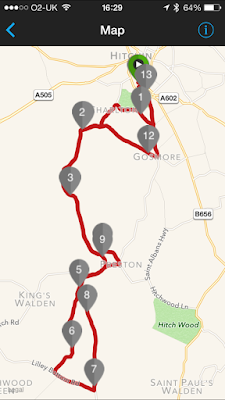 I'd been gagging for a race and really didn't realise quite how much until I'd finished today's - the Hitchin Hard Half.  A half marathon with a bit of up and down in it, almost all on (not closed) roads.

My aim was to enjoy myself and get around before the 2.5 hour time limit.  So that meant a minimum average pace of 11:27/mile.  Very do-able on the flat at my easy pace at the moment (as proven on yesterday's parkrun).  Add hills and it would need a bit more effort than simply "easy".  The plan was to hike the ups, relax on the downs and run the flats at a heart rate of around 170bpm. 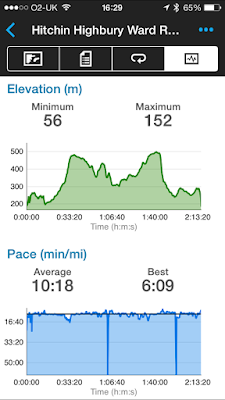 To cut it short, I had an awesome run. It took about 3 to 3.5 miles to warm up; and the grassy grounds of the Priory at the start featured a twisting route that took you up and down the same sharp hill twice before you left the grounds, off out onto the road. But then I had a great time - hiked the ascents hard (equalling and overtaking some people who were running uphill), enjoyed the descents (having to ask people who were not taking any advantage of the descents at all and were really rather taking up the full width of the path, to let me through as I was going quite a bit faster than them) and ran the flats easy for the first 6 miles. Then I turned up the gas a bit as I was feeling pretty good. At that point I had to stop off for a couple of minutes. I'd been running behind a chap in a union flag vest and he kept pausing and bending over, so I asked if he was OK or had cramp or something. It turned out he wasn't OK at all, and was dizzy and nauseated. So I told him to sit down and I'd get a marshal. We'd passed one about 20m down the hill, so I lamped it back to the marshal who then called for medical assistance. Running back up the hill to the poor chap, I found a couple of ladies giving him water and using a running vest as a pillow for him. I let everyone know there was a marshal notified and on the case, decided he was doing OK and that those ladies were coping nicely, so I could carry on. There was a water station right around the corner with two marshals, so one of them headed on down to lend assistance. Happy that all was under control, I got back on with my own race. There was an immediate long descent after that, which I enjoyed a little too much and pushed my heart rate higher than I was happy with so had to settle it down a bit for a while. 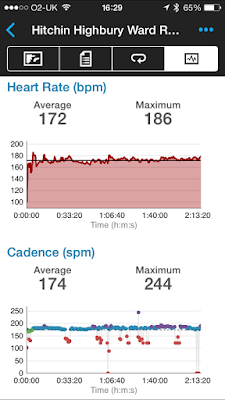 Having paced pretty well and kept my effort level in check, I overtook a ton of people in the last 5 miles. Lots of people ending up walking rather less steep inclines than they might have done earlier and then another long downhill which was a bit wet from the rain and gravelly so a bit tricky but I gained a lot of speed from that. I'd been leap-frogging an older chap for a lot of the hills to this point, he'd jog gently past me on the ups and I'd lamp it past him on the downs and it became a running joke between us - the last two or three hills he said he'd get me on the next one and he did. Until the last hill where I made my downhill and effort after that pretty good and I didn't see him again until after I'd finished. Then one long last uphill grind along a pretty straight road, so it was a bit mentally difficult but as it was likely the last real hill, I ran it all instead of hiking. I was a bit worried we'd end up doing the same up and down the hill in the Priory grounds as we had at the start, but it turned out to be a simple downhill over wet grass to get to the finish line; a relief!

Afterwards, I felt bloody great - a good run, not a totally shabby pace, especially considering the extra 4kg I'm carrying at the moment. I really needed that run and it felt good. (Finished in 02:18 including stoppage time - moving time was 02:15:29.) I did manage to catch up with one of the ladies who'd also stopped to help the other runner and established he was fine - it turned out he'd been running with his sister who just buggered off and left him to feel horrible by himself. Poor chap! 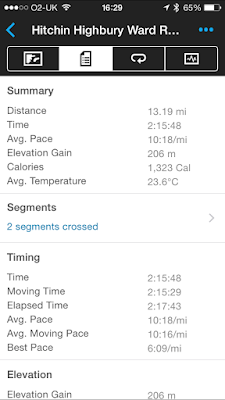 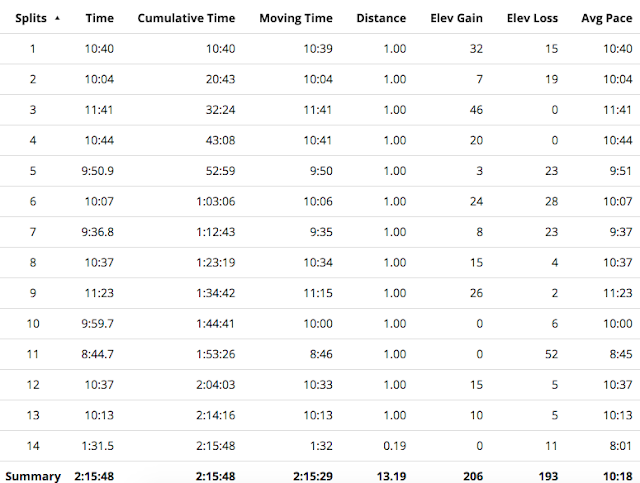