How lucky am I?

I got tickets to go to the British Olympic Ball, 294 days out from the 2012 Olympics.  A charity dinner, hosted by BT, at the Grand Hall at Olympia, with 140 British Olympic medal winners (83 golds) in attendance and a great show.

We arrived on a "red"(gold) carpet with god knows how many Olympians and other assorted famous people in a media circus... 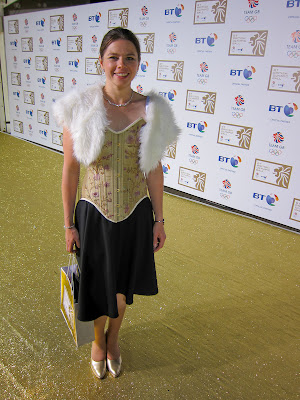 (shoulda ditched the bunny... I had glorious collarbone in that outfit, dammit!) 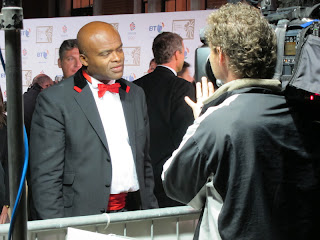 ...and headed in to an impressive sight of the Grand Hall set out with 179 tables and a huge runway stage for the displays and show later on. 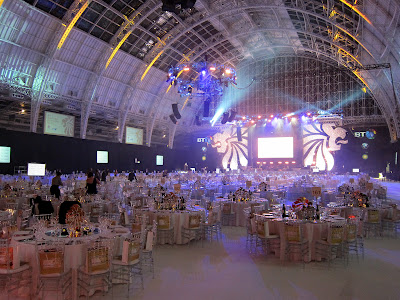 Chinawhites provided the bars and lounge area in front of the dining area and we mingled around a bit before spotting a few people we recognised... Denise Lewis (looking strong and beautiful in a flowing, black, backless dress that showed off her gorgeous back), Jayne Torvill and Christopher Dean, Tessa Sanderson and then... Alistair Brownlee (squee!), followed by Jonathan.  Gah!  They were standing a few feet away from us so we finally gave in, did the shameless thing and asked for a photo with them. 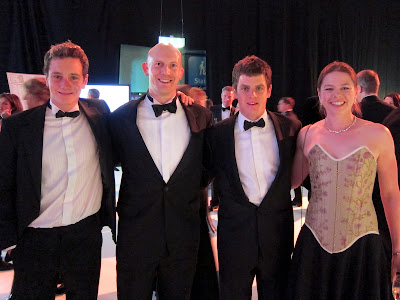 Had a bit of a chat with Jonathan more than Alistair and he was a sweet guy, very down to earth and un-fussed by the media attention.  We quickly ran out of time and had to find our table for the start of the proceedings.  Our table turned out to be right in front of the stage where Stephen Fry and Miranda Hart were leading the proceedings and introducing the various speakers.  After the initial fun and games with the autocue having been set up more for people of Colin Moynihan's height than these two, there was much self-deprecation in the presence of quite so many of the best athletes in the world.  You could hardly blame them for using their physical differences for humour at such an event; one of the things that struck me most about the Brownlees was how tiny they are.  I knew they were light and lean, but crikeybobs it's a different matter close up than it is on the telly.  Miranda looked stunning in a simple black outfit, lovely golden skin and make-up.  Wish there was more of her on the telly! 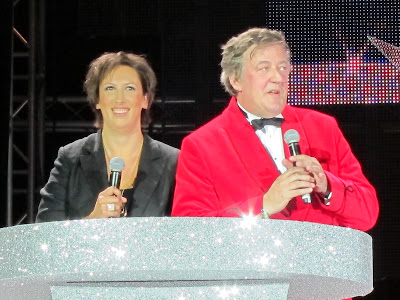 After the initial display from various athletes (BMXers, trampolinists, gymnasts, judo players, break dancers, Tinchy Stryder...) we were treated to speeches from various members of the British Olympics organisations, from the Princess Royal, to Sir Clive Woodward, Colin Moynihan, Denise Lewis and a couple of others.  It didn't take long to settle into paying attention, despite the next table along being oh so star studded (Mark Cavendish - who seems to be really quite shy, but was immensely gracious about having his photo taken with us, Ed Moses, Clare Balding, Katie Melua, Peta Todd, Alice Arnold, James Toseland...) 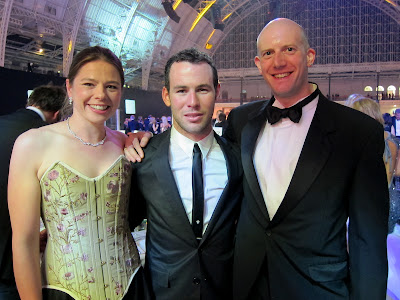 Food came and went and was, as you'd expect in such a huge venue, tepid and forgettable (due to it being tepid, I'm sure it would have been fabulous if it'd been hot.  Sorry Tom Aikens, but the venue was against you there).  Wine was plentiful and resulted in things getting a bit fuzzy from here on in.  We had some fun bidding on one of the charity auction items (we were never going to win it, given the sort of people in the room)... 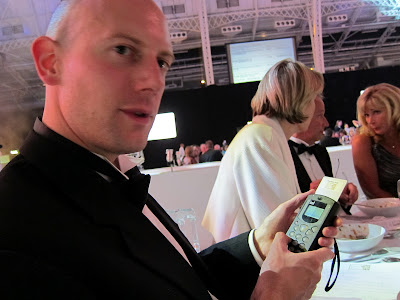 And then danced about a bit to Tom Jones' hour-long set (yes, we saw you Denise Lewis, boogieing away to Mr Jones!) before deciding to call it a night. 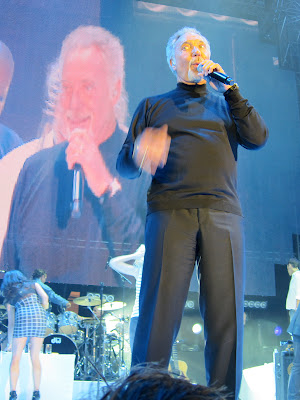 There were so many more huge names of sport there that we didn't see.  Like, seriously, Bradley Wiggins, -how- did we not see him?  And loads of others.  All in all, a great night.  We're both really fired up about the impending Olympics.  It's a real shame we don't have tickets for any of the events, but damned sure we'll be rocking up to watch the non-ticket bits of the triathlon and road cycling events.  2012 is the Year of Sport and I can't wait!