When I grow up, I want to be like Chrissie...

Chrissie Wellington is my hero.

I already did have a huge amount of respect and admiration for Chrissie Wellington and then there was Ironman Hawaii, the Ironman World Championships 2011 yesterday.  A couple of weeks out from the race, she had a bit of a crash and banged up the majority of the left side of her body; massive bruises, abrasions, the press was full of photos of the road rash. 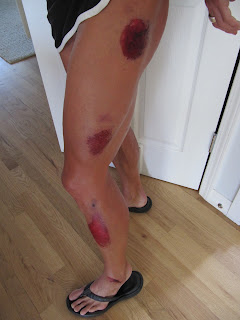 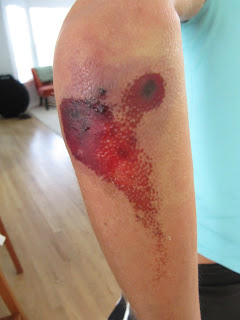 In her own words... "Not once did I equate a triathlon race to armed conflict. That was until i crashed the bike last weekend, and ended up battered, bruised and yes, covered in sore, bleeding ‘war wounds’. Asphalt 1 = Chrissie 0. Long story short. I had a flat front tyre, didn’t realise, took a corner relatively fast, the wheel slipped from under me, skin hit tarmac. Or more accurately my left elbow (taking the epidermis off ones funny bone is decidedly unfunny), my hip (a bit of padding would have been nice – should have eaten more donuts), and all of the skin on my left leg ended up covering the tarmac.  (Unfortunately i also took out Drew Scott, who also suffered the consequences of the crash – for which i am hugely hugely sorry).

Yes, i have some nasty wounds. That day i lost the battle with the bike, lost a whole heap of bodily fluids and a considerable amount of skin, but I didn’t lose my fight."

It would have had quite an impact on training and mental state on the lead up to the race.  You can read the race reports elsewhere, but there was a lot of worry that Chrissie wasn't doing so well as she dropped further and further back on the bike leg, ending up 21 minutes behind the female leader.  It didn't look good at all.

Then on the run leg, she started to really reel them in.  One by one she passed athletes to come in the World Champion for a fourth time.  Through pain, the grind, the aching injury, the heat and the ground she needed to make up.  She did it.  She won and she showed the world that she is a one in a generation phenomenal athlete who is master of her own mind and body like nobody else.  And she came to professional sport late in life, to dominate the world of long course triathlon, showing us all that it's never, ever too late.

i defied what i thought was possible. This is a dream come true.
chrissiesmiles Chrissie Wellington

But I hurt like i never have before, and had to dig into the depths of my body and soul. I think i need a plate of chips
CompressportUK CompressportUK

Post race press conf: 'I left every ounce of my heart and soul on the race course today' @chrissiesmiles

When I grow up, I want to be like Chrissie.  Only it probably is a teensy bit too late for me to win at Kona ;o)
Posted by TOTKat at 17:28