Mule Bars... their idea is natural, wholesome fuel for active/sporting people - "Natural Tasty Energy".  Kinda like 9 Bars, they're made from fruit, nuts and seeds and a bit of something to help stick it together (e.g. honey, or rice syrup). 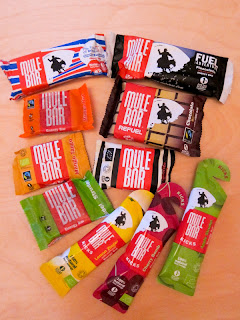 With 3 options for fuel and one for refuel and a large range of flavours across the board, they look like a great choice for vegetarians (and the gels are all vegan happy too) and those who want a nutritionally balanced, natural fuel which is organic, Fairtrade, top award winning across the sports press and endorsed and used by top athletes ("Tour de France winners, World champion Ultraman racers, Ironman competitors and triathletes, footballers, World Cup winning rugby players, surfers, sailors, kite surfers, kayakers, downhill (and uphill) Mountainbikers, High altitude mountaineers, free climbers, slackliners, rollers skaters, bladers, boarders and skiers, frisbee players, sculptors, winemakers and dairy farmers (yes really), golfers, gymnasts and yes, last but not least, even crossword setters.").

I got a taster pack with some of each to try.  Though I'm now out of race season (got a 10km in a week and then an offroad run in December, but nothing longer than an hour's activity), some of these will be tryable in training and to help me get through some of the long days at work.

I packed a few in my bag for work, for emergencies, and sure enough I ended up needing to use one to get me going for a training session with Jez.  We've been doing a few swim technique sessions and a couple of tests to sort out HR zones, and last week we finally did a speed work session to get started on the more general triathlon training.  It was a 60 minute session of multiple T2 bricks; bike, run, bike, run, bike, run, bike, run, bike, run.  All at pretty high intensity.  I'd had a hard, intense day at work and not really had enough to eat by the time it was an hour before my training session, so I chomped on one of the MegaBite (30g) fuel bars.  I'd packed the "Hunza Nut" (apricot and walnut) flavoured bar and it was really rather nice.  A neat, small, manageable 105kcal boost of energy and pretty tasty.  I couldn't really get much of the individual flavours, but it was neither sickly sweet or too crunchy or sticky.  And it perked me up a good deal for my training session. 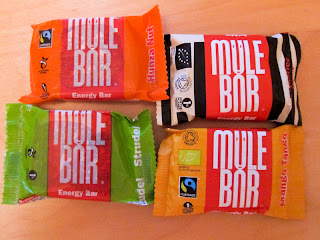 Usually during a session with Jez in the gym I feel pretty cruddy and underfuelled.  I don't like training at the end of a work day for this very reason.  I don't like races that start much after 11am for the same reason; I'm not confident with the fuelling after I've had part of a day.  No idea how my body uses fuel through a "normal" (no exercise) day, so come 6pm I have no bloody idea how much I've used, how much I need still and how much extra I need to be not in deficit at the start of a training session.  Having had that pick-me-up Mule Bars, I felt a -lot- better this time.  No sicky feeling during the session (having tried a banana to get me through a session before a couple of times, I had some unpleasant acidic feeling and general nausea).  Thumbs up for the MegaBite there.  Very good indeed! 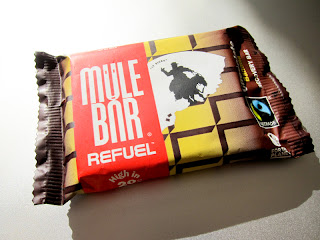 A couple of days later, I had a long slow run in the schedule and I was utterly starving afterwards, so it was a good opportunity to try one of the Refuel bars.  I thought the banana chocolate one would be a good mix of flavours as I generally like those two together.  However, I was quite disappointed.  There was almost no chocolate flavour and the banana tasted like a slightly unripe banana that had been squashed - you know the ones that have greenish skin with black marks and black squashy bits of flesh inside though they're not quite ripe.  Not horrible by any means, but not all that nice either.  It did fill a gap but I needed a lot of liquid with it too as it was also a bit drier than I was expecting.

More tastings to come when I move through the other bars and the gels...
Posted by TOTKat at 15:13