This was not part of the plan

Today I had an endurance swim and a 2 hour spin on the bike scheduled.  As I needed to change wheels, cassette and seat onto my tri bike for Sunday and it'd need testing to make sure it was all in good order, I decided to do that and then use that bike for my ride.  I took off the handle bar mounted bottle cage to clean the sticky off it from Bolton to make sure I could get bottles in and out more easily than that day when I got really peed off with it towards the end.  I'm not sure if the bottle today was slightly fatter than usual, but it was a bugger to get back into the cage.  Hm. 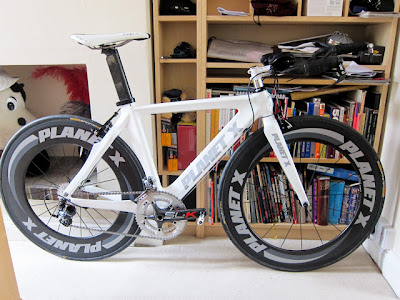 I headed out to Kingston and onto the well-known Thames Turbo bike course.  I can ride it in my sleep and the pot-holes would be a good test for my new Adamo seat.  Power down to the road nicely on this bike, I enjoyed a good 90 minutes well in zone one and putting out an average speed of 26.8 km/h (stopped to fiddle with gear adjustments a few times, so avg speed is different to avg moving speed).  OK, it rained about 20 minute in and it rained hard for about 10 minutes, but that was fine.  I did lose the bottle over one of the pot-holes and had to stop to get it.

Then as I was heading back towards Kingston from the Thames Turbo bike route, through Hampton Wick, I had a drink while the traffic was quite slow and tried to wedge the bottle back into the cage.  I was being a bit of a bugger and I gave it a good shove.  At that moment, the back wheel skidded out from underneath me, the front wheel glanced the kerb and the bike went over, on top of me while I slid along the pavement on my left side.  As I was going over I thought, "This is exactly the sort of thing I was worried about before the next two races.  Ohgod, please let me not break anything!  Ow.".

Passers-by on the pavement stopped to help and a car too.  As I was checking myself out and and talking to people, I turned to prop up my bike and Police had appeared out of nowhere.  They thought the car that had stopped had hit me.  Oops!  I did hurriedly tell them it was totally my own fault.  Everything seemed OK, just a little bit of blood on my knee and lots of wet gravel everywhere else though my little finger felt numb and tingly.  Bike looked fine too, so I declined the kind offer from the passer-by to go to her house around the corner to get cleaned up and cycled on home.

As I picked up speed on the larger roads, and put more effort in to the pedals, I noticed a deep soreness and stiffness in my left hip.  Blood trickling down my left leg and a bit on my left elbow was the only really visible sign of damage, the pain was mostly in my hip and shoulder which were both covered by clothes. 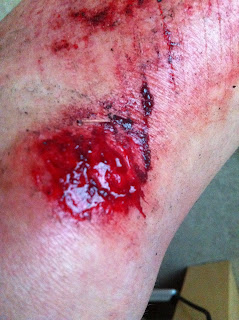 When I got home, my knee had some really quite cool globs of congealed blood on it but my hip and shoulder were very very sore.  After filling a few tissues with snot (cold, wet and a bit in shock), I dared to have a look at my shoulder. 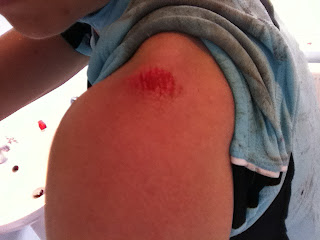 Not too bad, just an abrasion through the fabric of my cycling top.  OK, it was seeping a bit of blood and clear fluid and swelling up a bit, but really not too bad.  My hip, however, was a bit of a shock.  Although it was very sore in the joint and muscle while pedalling, I hadn't expected there to be much surface damage so the expanse of that one was surprising and it was swelling up quite impressively too.

My elbow... not too bad, especially considering it had no fabric covering it when it hit the ground. 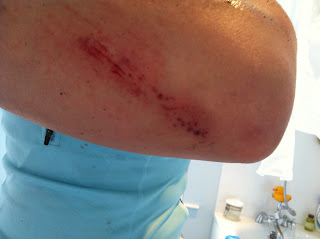 My calf; quite scraped up...

And even a dink in my ankle through my sock.  Nice!

So yes, not really part of the plan.  The plan was to avoid injury between the races.  That said, I'm glad this was today and not in 2 weeks time.  The grazes are mostly tolerable and would be covered by tri-suit to protect them under a wet-suit apart from the big one on my calf.  That's a bit of a worry under a wet-suit so I may just wear calf guards to keep it away from the rubber.  The deep-bruising in my hip may well end up compromising power on the bike and maybe even the run too.  It being 4 days before a pretty flat 70.3 is a much better thing than 4 days before a bloody hilly full distance Ironman.
Posted by TOTKat at 18:01