Prompted by an email from someone who had trouble being able to post a comment, I decided to have a post that answers specific questions I've been asked.  So, thanks The Crawfords and here goes with your questions:-


I/we wanted to post a comment but came unstuck when it asked for a google a/c or about 5 other options - perhaps you could advise what we choose at this point?"

Good question.  As there are a lot of evil bots out on the Internet, trying to pimp dodgy websites usually full of nasty viruses, worms and trojan horse software, I use Blogger's built-in bot and spam protection.  This involves people having to make an attempt to validate that they are a real person.  I chose to allow only people who had one of a number of validated account types, e.g. a Google account or an OpenID (which you may already have without knowing it).  I do also require the use of word verification, which generally protects against non-humans posting comments but not the people who are paid to post comments that link to nasty sites.  I'm happy to try allowing anonymous comment posting for now and see how it goes, so you should now be able to comment without having one of the approved account types.

"Anyway we have really enjoyed reading about your races and achievements this year. You and hubby have done so well. Perhaps you could blog more about your injury and recovery because a lot of us have suffered with broken collarbones. My husband has broken his twice and he was curious that they had plated yours as the plate is usually left in and then becomes a complication should you fall again?"

Your poor husband - once is bad enough for me!  I'll continue to post about the recovery process, but answer the specific question about the plate here.  The break I had resulted in quite uncomfortable "tenting" of the skin:- 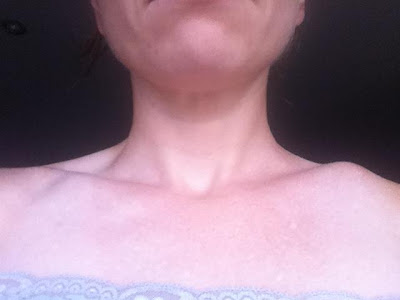 As well as my shoulder dropping quite a bit and the likelihood that the bone would heal pretty much in the position it was in, if it healed by itself at all.  The consensus of a number of people (including my coach and physio) was that it needed to be plated (especially at my age *cough*).  So, rather than wait 3-6 months to see if it healed naturally and with the high risk it would heal very very wonky and lumpy, I took the option for surgery straight away.  After consultation with the orthopaedic surgeon, despite being scared witless about general anaesthesia and surgery and hospitals in general, I went ahead with it.  And the second I woke up from the anaesthetic, it felt better.  The discomfort from the bent bit had been worse than I'd thought and I only realised it once the skin wasn't being dragged over the broken end of bone all the time.

"Would love to know how you are spending your time off work (if that's the case), "

Sort of handily, the crash co-incided with taking a break from work.  I -was- planning to rest, recover and slowly get back into training after Ironman Wales, take a trip to Hawaii for the World Championships in Kona, then look at a new job when I got back.  Some of that had changed and instead of racing Wales and recovering from that, I'm recovering from surgery and spending time looking at new job opportunities already as well as cooking more involved meals than usual as I have a bit more time on my hands.

Get to 100% mobility with my left arm, so I can start doing any lifting and/or resistance with it.  Once I'm allowed to run, which should be sooner than the resistance ban is lifted, I'll start up with that again so I can have fun at a half marathon in November.  I wanted to run the marathon distance, but I don't think I'll have time to work up to the distance by then after 3.5 weeks off running at this point already.  It's likely I'll be allowed on a spin bike pretty soon (no hands on the handlebars so I don't lean using my left arm) so I can start using one of those to stave off the drop in fitness.  Must remember to take headphones to the gym with me!  So, October and some of November will be relatively gentle months, then by December I start back on the proper training again.

This is the fun bit!  2013 will be the year of getting quicker at shorter distances, so no full iron distance races, no marathons, no ultra distance runs...  more on that to come in another post soonish.

"Do you see yourself racing forever?"

Absolutely!  I fully intend to race in some way or other until I die.  There's nothing more fun than running, cycling, swimming, or some combination of those, with other people whether it's racing, a timed distance or a sportive.  I love it!

"Sorry that's a lot of questions in one email

No problem at all - people who blog love the attention really :o)
Posted by TOTKat at 12:00