The magnificent seven and me

I was not one of the Ironman 2012 Ultimate Challenge finishers.  But these seven people were:- 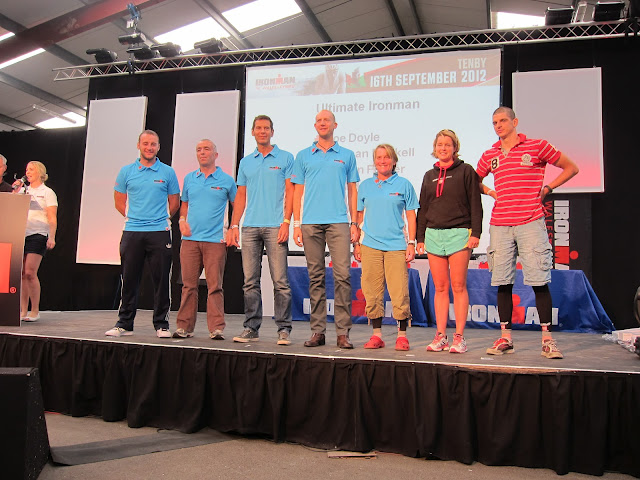 (from left to right) Joe Doyle, John Mongan, Tony MacPherson, Norm Driskell (Mr TOTKat), Kate Stannett, Bethan Fowler (Pro) and Paul Hawkins (Pro).  Eimear Mullan also finished all 4 (1st at UK 70.3 and UK and 2nd at Galway 70.3 and Wales), but as she didn't commit at the start was not counted as an Ultimate Challenge finisher.

I am not jealous in any way of these people.  Yes, I did want to complete the challenge, but it was completely outside of my control that I could not start Ironman Wales.  Thanks to a healthy training schedule, a good plan and pretty good attention to detail with the work I'd been given by my coach (Rich from thetrilife.com), I was ready to get through all 4 races and have no doubts at all that I would have finished Wales in the time limit allowed.  It would not have been a quick race, maybe 15-25 minutes longer than Bolton due to learning a few things and the Wales course being really rather tough, but I am certain that I would have completed had I started.

Not being able to race at Wales, I followed the suggestion of Kevin Stewart (Managing Director of Ironman UK and Ireland) and volunteered for finish line duty to hand out medals (fairly safe with only one working arm).  On the day, I ended up unwrapping a good few hundred individually wrapped medals, handed out a fair few bottles of water and recovery drink but placed only one Ironman Wales medal around a neck...

...along with an Ironman UK 70.3, an Ironman UK and an Ironman 70.3 Ireland as well!  Despite there being a fanatically over-enthusiastic volunteer on the finish line, who got right in almost every athlete's face as they came through the finishing arch (she drove me nuts all evening and clearly had no understanding of the athletes' situation whether first timer or seasoned Ironman, but her intentions were almost certainly good), a couple of the Ironman UK staff (thanks Laura and Allie for looking after me!) grabbed me as they heard Paul Kaye announce MrTOTKat coming down the finishing chute ("Norm Driskell... you are The Ultimate Ironman!") and propelled me right forward to present the medals and put them around his neck before anyone else got anywhere near him.  Almost all of the other athletes in the race had the Mayor of Tenby (Trevor Hallett) present their Wales medal (and, in fact, he did give another one to MrTOTKat before taking it off again when we told him there was already one on there).

Ironman 70.3 Ireland (Galway) was quite a turning point and is instrumental in my decision of what to focus on for 2013.  Rich had already passingly suggested that 70.3 might be more fun and productive for next year (more speed work during the week, more focusing on drills and technique) before I set off for Ireland and I had started thinking about it with the beginnings of a plan forming.  After Galway and looking at the stats, taking into account racing and training defensively to get through 4 IM races in my first year of going longer than Olympic distance and the crash and ensuing tricky run, the numbers seemed promising enough to decide to focus on 70.3 with aspiration to execute a top-notch race at Galway in 2013.

So, the plan for now is to focus on rehabilitation of my left arm and shoulder after the surgery to fix a titanium plate in my collar-bone to put all the pieces back in place and together so it heals straight and properly.  Then, we have a triathlon training camp in February at Club La Santa with Joe Beer and crew, followed by Hell of The Ashdown towards the end of February, then a couple of Thames Turbo sprint races up to Ironman UK 70.3 in June, then a bit of a break before Ironman Ireland 70.3 in September, then another big old break before Ironman Lanzarote 70.3 to finish off the season in November.  A really nice spread throughout the year, aiming to peak at Galway for a strong race on a course that seems to suit my strengths.
Posted by TOTKat at 18:30