The call of the next season...

Galway has been a pivotal race for more reasons than stopping me from completing the Ultimate Challenge.

I thought I'd be devastated not to finish the challenge but I'm just disappointed.  I deserved to have finished all 4 races, I'd put in the work, I had the fitness and the determination.  I have no doubt I would have finished Wales to complete the set had I not broken my collar bone.  Yes, it means I don't get to tick that box, yes it means I don't get the cool special jacket, medal and t-shirt and I don't get to tell people I did it.  But, I did deserve to and that's pretty darned good.  I'll always know that even if other people won't and won't understand it.

The other reason for it being a pivotal race is what it showed me about what I could possibly achieve.  Given the close proximity to the final race of the challenge, with Wales only 2 weeks afterwards, my coach and I agreed I needed to conserve my body and limit damage as far as possible to allow for a comfortable day in Tenby.  This meant I could have a bit of a go in the swim and bike but, as Rich said, "doss the run".

Bear that and the crash in mind and look at the performance differences between Wimbleball and Galway.  Yes, Wimbleball is a tougher course, but look at the improvement vs the rest of the field (rank by that stage of the race) and my age category (cat rank for that leg of the race)... 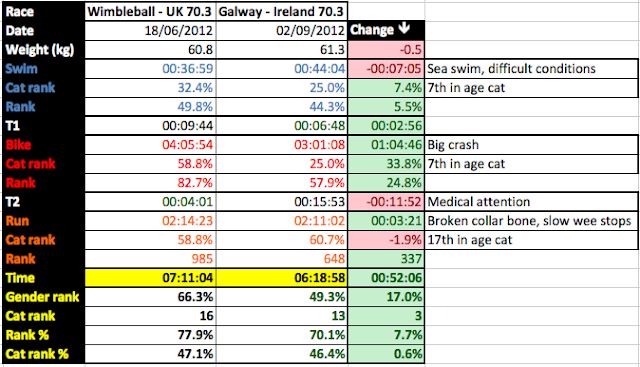 A minor improvement vs the field in the swim and a bit of learning in T1.  Then I've jumped almost 34% up my age category and almost 25% up the whole field in the bike *including a crash*!  Not completely going balls-out and then 5 minutes on my back/arse at the side of the road and then the last 9km at a gentler pace overall (I think) and still I moved from 60% down the age category to the top 25%. That's really very very encouraging.  Yes, the run was not as good as Wimbleball (quicker, but lower down the field - the courses have quite different profiles), but I had two pee stops of about a minute each ('s hard to get your shorts on and off with one hand) and I was trying not to jar my shoulder too much the rest of the time.  I also had an extra 11 minutes in T2 being seen to by the medics which wouldn't be normal.

The race itself felt great and had I not crashed so badly, I think I might have been fighting for 3rd place in my age category.  Not quite enough for a 70.3 World Championships slot without a lucky roll down - I'd need 2nd place for that - but I have to think it might be possible if that had been an A race.  So, in any case, 70.3 might just be my Goldilocks distance.

Right now, next year looks like the year of 70.3 and trying to qualify for the World Championships at Lake Las Vegas either in 2013 or 2014, depending on what races look possible to make A races in 2013.  Current thinking is Wimbleball, Galway and Lanzarote for a nice spread through the season and finishing somewhere warm in November.  It also means I can do some sprints (hello Blenheim! :o)) and maybe olympics as well through the year as it won't interfere with my overall training, so I can have a lot more fun with that.
Posted by TOTKat at 16:35