Feeling entitled - or why I'm entering the Kona Lottery

There's a sinister side to something like the Ironman World Championships experience at Kona and I don't like what it does to a person.

From the first day I was there right up to the last, I was surrounded by the opportunity for what is commonly called "schwag".  Free stuff from companies promoting and selling their gear at the Ironman expo.  Often in the form of t-shirts, lanyards, baseball caps, stickers etc. and sometimes just given out at a certain time, or if you wear a certain stick-on tattoo and visit their stand while they still have stuff to give out. 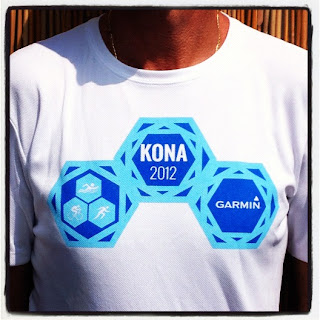 You get so used to getting free stuff (I ended up with 5 t-shirts [Biestmilch, 2x Cervelo, Garmin, Rudy Project], 1 Shimano baseball cap, 4 LG gels, 4 packs of Extreme Endurance, 2x Garmin 910XT coloured wrist straps and a Rudy Project wind vest) that you get miffed when you don't get something for free from a booth or stand.  You start to feel a sense of entitlement to being given stuff and I really don't like that.  And then you think you'll never need to buy a t-shirt again and you think, gosh how much money I've saved there, for a moment forgetting the actual cost of getting to Kona; the financial cost (which is really not insignificant) as well as the actual blood, sweat and tears.  But the latter is all for naught if you're just not quite fast enough on the day you're at a qualifying race, or you're just not ready to be fast enough.  You can have frittered away hundreds or even thousands of hours in training, as well as similar numbers of $/£/€ on kit, race fees, nutrition, travel and still not qualify for the big race in Kona. 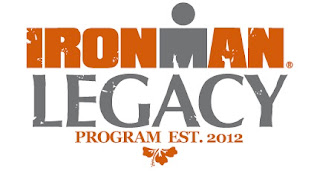 Ironman have provided those of us in that position with a couple of chances to get to Kona without having achieved a qualifying position (or roll-down one) at a qualifying race.  If you've spent years trying and managed to complete 12 Ironman races, you can enter the Legacy programme.  The rules are a little complex and will probably evolve as more people hit that 12 race minimum: "In its second year, the IRONMAN Legacy Program will grant 100 loyal IRONMAN athletes an opportunity to compete in Kona at least once in their lifetime. One hundred Legacy winners will be chosen by IRONMAN and selection will be based on several criteria. To be eligible for selection through the Legacy Program, athletes must have completed a minimum of 12 full-distance IRONMAN-branded races, have never started the IRONMAN World Championship, have completed at least one full-distance IRONMAN event in each of the 2011 and 2012 seasons and be registered for a full-distance IRONMAN event in 2013."

So I find myself; despite having said "no full-distance Ironman races in 2013", the fact that I've only completed one full distance Ironman to date, the oppressive heat and cruel winds on the Kona bike course, and the fact that it is bank-breakingly expensive to get there; poised to click the button to enter the Kona Lottery for next year.  Why?  Why would I do that?  Mostly because the likelihood of getting a place is very low until you accrue a few years of entering; partly because I have post-Kona blues (if you've ever been on any kind of camp music/sport/hobbies or convention, you'll know what I mean); partly because a tiny tiny bit of me would really love to be back there this time next year.  I'm not sure I like that, but I'm going along with it for the ride.

Lottery sign-up opened today at noon ET (that's 17:00 in the UK).  If you in any way want to race at Kona and aren't likely to qualify by placing at the top of your age group in a qualifying race, sign up.  You never know....
Posted by TOTKat at 17:34