Next Sunday I'll be running the London Ultra; a 50km course around London, mostly clockwise on the Capital Ring from Mottingham/Grove Park to Perivale, through quite a few London parks, heathlands and otherwise green bits.

You'd think that for my first run longer than 42km, in fact only my 2nd ever run over 28km, I'd be fearful of the distance and the fact that I've not run further than 15km in one continuous run since June last year.  But no, that holds pretty much no fear for me.  I know I can cover the distance, yes my hips will likely ache somewhat at some point around 35km in, and the balls of my feet too if I pick the wrong shoes, but there is another fear...

You see, despite the web site saying cheerful things like "London's Capital Ring provides a wonderful waymarked route which is easy to follow and can be run at marathon pace", the course (now in it's 2nd year after a course change following the first two runs), is well known for people getting lost, and lost more than once along the course. 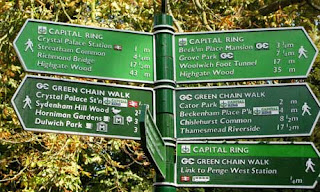 I've done my research, I've looked at the course route and I've read a god few race reports from last year and they all, without fail, mention getting lost at least once.  Now, if there's one thing that's guaranteed to drive me crazy in a race, it's poor route marking.

I really don't want to get massively angry as it's so energy sapping and this will be my first endurance event of any notable duration where I will not be fuelled on dietary carbohydrates (I'll carry some bits of sausage, some nuts and cheese in case I feel hungry but it takes so long for that food to get processed it wouldn't be any use to fuel the running I'll be doing at the time, I'll be relying on body fat and liver glycogen).  I'll need all the mental energy I can get and wasting it on fury will be very counter-productive.  Yes, I'll have a map, but I really don't want to be getting it out to look at it every 5-10 minutes.  The route is pretty twisty and there aren't any long stretches where you could zone out and enjoy the motion.  I've not been able to convert the KML file from Google maps into a file that my Garmin can read, nor am I convinced about the manually transcribed route I've made in Garmin Connect as it's based on the official Google maps route that doesn't follow paths or roads and you can't tell which side of the river it's on at times, plus it looks like it goes through buildings a lot of the time - it looks like a low resolution GPS file.

So if anyone knows the Capital Ring (Sections 3 to 8) at all, or has walked/run bits of the route, or has run the London Ultra route (2012 onwards), or just generally has any suggestions on how to stay on track, please do let me know!
Posted by TOTKat at 18:07