(The human, fluffy race report is here, the low-carb report is below.)

So, I've run two half marathons and two more as part of Ironman 70.3 races, and one marathon as part of an Ironman since I started running in July 2009.  I've also got my longest training run of 28km once, but since July 22nd 2012 (Ironman UK 2012) I've not run further than 15.5km in any training runs and only one half marathon race.  Of course it was a great idea to sign up for a 51km Ultra Marathon!

Add in the fact that I changed to a low carbohydrate (high fat) diet at the start of November 2012, and, against conventional sports wisdom, planned to race without loading up on, or taking on carbohydrate during any race as far as is practical and you get a quite interesting place for a 51km long running race course.

I train with water and electrolytes and otherwise just end up eating a little more on training days than rest days, averaging around 2400kcals per day.  And there are a few reasons I want to race without taking on carbohydrates (faff, stomach trouble, personal lack of skill, time-wasting, not being comfortable with the contents of gels/sports drinks/sports bars in general, insulin spikes).  This 50km Ultra race was going to be a fantastic, practical test of the theory of fat-fuelling exercise for me.

In the run up to the London Ultra on Sunday, I decided to work out how long I could run for and at what effort level before I depleted my body's glycogen stores.  I had the gas analysis figures from the beginning of December last year and Excel in my armoury...

Complicated with a lot of assumptions:- 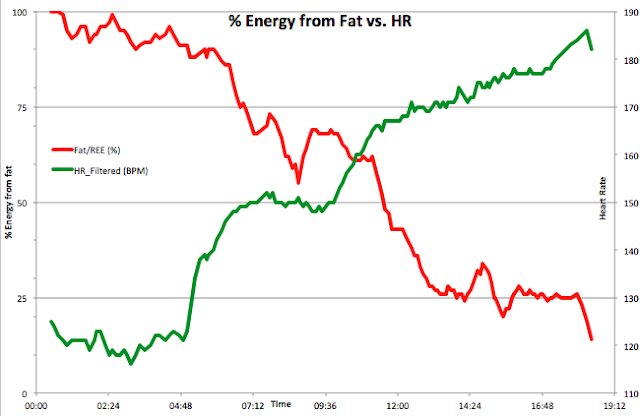 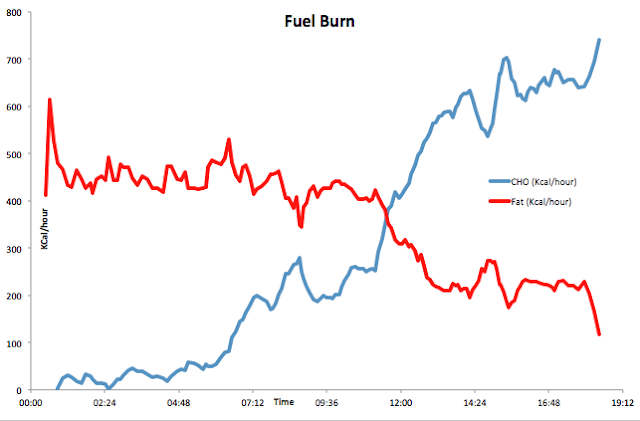 Using those assumptions, the calculations dropped out the rough reckoning of needing to maintain a heart rate of 170BPM to be able to last for 6 hours on the carbohydrate stores from my body (estimated to be 1500kcals from the initial assumptions above and a burn rate of 4.2kcal/min of carbohydrate).  You can see from the graphs and below spreadsheet fragment that the time (Time on CHO column below) drops off a cliff at 166BPM when it was tested (and I'm assuming an improvement of 5BPM in threshold since this test).

So I kept fairly close to the heart-rate I'd intended.  But, for every beat per minute above 170 I burn around an extra 10kcals in carbs per minute so it starts getting very carb costly very quickly when I go above that number.

To cut the long story short, I had scrambled eggs and smoked salmon with a few cherry tomatoes for breakfast at around 06:30, the race started at 08:59, I finished at 14:50 having had only water with High5 Zero tablets in (and about 300ml water with Nuun tablets in).  I did not bonk.  I maintained a steady 06:45/km throughout (apart from a wee stop and short stops at aid stations and traffic lights).  I maintained an average heart rate of 170BPM.  I did not feel tired.  I was perky at the finish.  The bits of me that hurt was my calves, quads and soles of my feet and I needed to stop when I did because my fitness and muscular endurance levels had limited me (remember, I have -not- trained for anything like this distance in the slightest), not my fuel.

Endurance racing without carb loading or taking on carbs in a race is possible.  It isn't painful or difficult.  Fat adaptation works.

And I want to try this again but with race-specific training and better long distance fitness (i.e. able to run quicker for the same heart rate/effort level).  Time to ponder when that might be practical; possibly after 70.3 Zell Am See, seeing as I'll likely ditch 70.3 Lanzarote now.