I'd always intended to race the Virgin Active London Triathlon this year and had entered previously, but since then I won the Virgin Active competition to become the 12th member of Team Freespeed Virgin Active and that meant it was more than just the Sunday Olympic race on the cards.

Saturday was now a day that I was now going to be taking part in team duties; helping out on the Virgin Active stand at the expo and perhaps filling in on a relay team for the VIPs if there were problems for any of the teams with people unable to race. 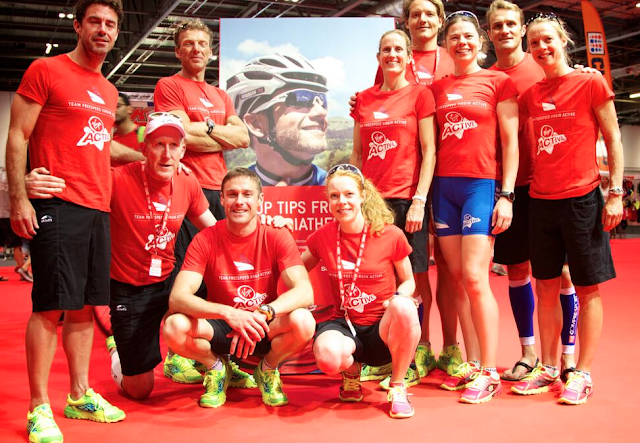 Saturday morning, Mr TOTKat headed off to parkrun at Wansted Flats while I went to the expo to register, find the stand, meet the team and some of the sponsors.  The guys at Skechers were brilliant; knowledgeable, enthusiastic about the new range of Performance shoes and really helpful with sizing.  I've been running in the GoRun Ride for a couple of weeks now and I think Mr TOTKat is going to kill me if I mention how incredibly light they are one more time!  Looking forward to trying more of the range soon.  I bumped into Stuart and Richard Hobson at the Skechers stand, closely followed by Dec, Cat, Dion, Ali, Matt, Charlie, Jamie, Jenny and Richard Melik.  Tim arrived later and Sam was racing in IM Switzerland (and a great result he had there too in hot conditions with a no-wetsuit swim too).

We all headed upstairs to split into groups to help with the VIPs and Virgin staff competing in the race - offering tips, advice and making people feel comfortable about their first race as there were quite a few. Jenny,  Jamie and Matt headed into the VIP area to help with a couple of the celebrity relay teams who had missing members for various reasons and I helped in the staff room.  Shortly after that, there was a problem with one of the Cosmopolitan magazine relay teams who had lost their swimmer and cyclist both.  Richard Hobson was going to step up and take on the job but had no idea where his bike was, so I volunteered and then had to trot back to the hotel (about 10 minutes jog) to get bike, helmet, wetsuit and bike shoes.  So exciting!

Poor Holly having been dumped by the rest of her team had me come to the rescue :o)  Not quite the same standard as the rest of the Freespeed team, but not too shabby in the end nonetheless.  I wasn't expecting to race, so putting in a bit of an effort and coming out 57th (overall - mixed age & gender) in the swim and 57th (overall - mixed age & gender) on the bike of all the sprint teams (253 teams in total) I felt pretty good about thatand it put Holly in a good place to have a nice run and finish well before a lot of the other teams. 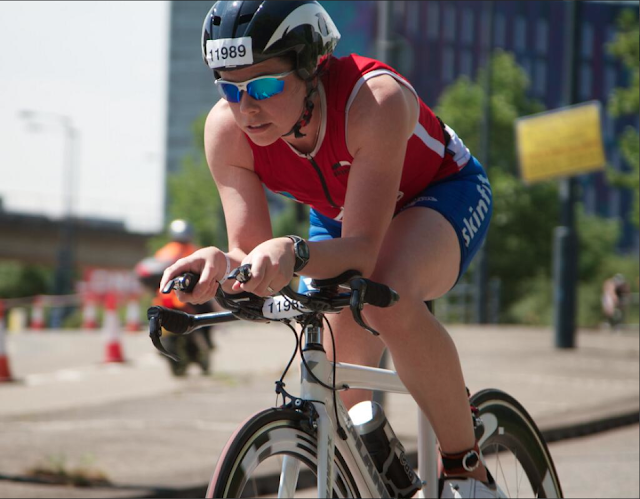 The swim was a nice surprise and I got on someone's feet and drafted pretty much the whole way around for the first time ever - I was trying to take it easy but put in a decentish time for sprint relay team.  I had a bit of fun on the bike, though the sprint course was very short at the first turn end so there wasn't much chance to get any speed up but the other end was quite fun and the promised rain didn't come.  Richard Melik took a cracking shot of me on the bike in the sunshine in my borrowed race top (thanks Matt!).  I also ended up borrowing swimming goggles (thanks Jamie!) and snaffling a race number belt as I really wasn't prepared for racing that day.

Holly (from Cosmo) was ready and waiting in transition for me when I came in off the bike and she had a lovely run out in the sun and seemed to really enjoy the whole experience.  Shame I didn't get a photo taken with her really.

I can happily say that the sprint was great fun and I was very pleased to have been able to help out someone who might have missed out on the experience of being part of a relay team otherwise.