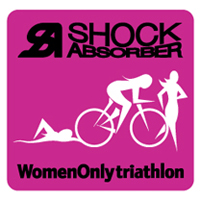 I'll be entering the Shock Absorber Women Only Triathlon at Eton Dorney on Sunday.  (Thanks to Jenny for suggesting it might be fun!)  It's going to be a real fun bash at 3/4 Olympic distance on a flat, sweeping bike course and a totally flat run course on tarmac with a bit of grass right at the end.

I had a miserable time at the HSBC Olympic distance race two years ago (back before I had any idea about what training was, how to do it etc.) at this venue, but a whole lot has changed since then and I expect a stonking good time on Sunday.

Not sure I'll get to race in my new Sailfish G-Range wetsuit (courtesy of my new membership of Team Freespeed Virgin Active - thank you for the incredible support so far guys!) as the water may be warmer than the threshold for a wetsuit ban under BTF rules (22C).  Bit of a shame really as the little try-out I had in it suggests that it's a really quick suit!  Also not sure I'll manage to sustain the three tweaks to my swim stroke that team-mate Matt Molloy suggested this morning; one of them really puts a lot more power in my stroke, but as always with more power it means it's gotta come from somewhere and it's quite tiring when it's not ingrained into technique with a good few hours practice.  That said, 800m swim isn't all that long to really dump out some energy :o)

I'm going to be brave and use the TT bike (though I'm being advised to take advantage of the fact that the team is headline sponsored and run by Freespeed (bike fit studio - Retul certified) and have my bars checked out for suitability for me, so I'll do that soonish but there's not enough time before Sunday) as there's pretty much no need to get up out of the aero-position for the whole bike leg apart from at the end.  Fingers crossed I can do that as it's great experience to rack up for me, given I'm not the most confident in my own ability cyclist.  I so want to get a good go on that bike with the new HED Jet wheels on it (6 on the front, 9 on the rear)!

And I'll be giving these here Skechers Go Run (Ride) a good try out on the run too - they feel spectacularly light but are a lot more cushioned than I'm used to.  Reckon they'll be perfect for the training and run I'll be doing in October - Rowbotham's Round Rotherham (80km Ultra Marathon).

AND there's a barbecue after the race too!  Perfect!
Posted by TOTKat at 13:51