For the second time in 9 months I had porridge for breakfast, with a healthy handful of California Raisins (oh how I have missed raisins!) and some actual sugar in it.  I figured that as I'd taken a good chunk out of my carb stores on Saturday by having a bit of a burn above the threshold where I start to burn carbs at an appreciable rate, I wanted to make sure I'd topped them back up again before my midday effort.

I cheered off Mr TOTKat and the rest of the Freespeeds who were doing the Olympic Plus and went to get a coffee in the 20 mins I then had before they'd start to come in off the swim.

After cheering them all back in from the swim; Dion, Matt, Hobbo, Cat, Ali, Dec and Mr TOTKat I then needed to go and find some food to bridge the gap I was going to have between a 5am breakfast and finishing my race some time around 3pm.  Food scored, I headed out onto the bike course to wave at the guys with Jenny, Mette, Richard and the twins.  Then a quick look at a bit of the run course to take photos and it was time to get myself into a wetsuit and head for the swim assembly point.

Having put in a 15 minute easyish, fully-drafted 750m in the sprint on Saturday, I wasn't sure how the swim would go.  But I tell you what, I did the one thing I really wanted to do in every race for the last 10 or so and I started out really hard.  I led the whole wave for the first 200m!  Then faded a bit and fell into a rhythm, sadly in clear water with no toes to draft off.  I dug in and just decided to try to stay as on-course as possible and make sure I got some water into my wetsuit at the top just before the end so it would slip off easily given I struggled a bit on Saturday with my shoulders (they're big shoulders and they didn't get all that wet, so that does make it difficult.) 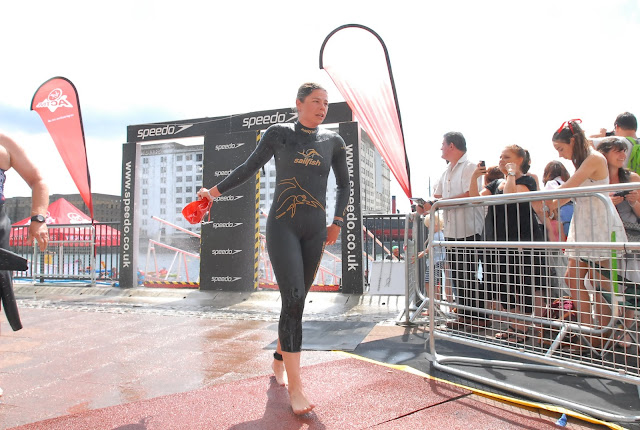 Best Olympic distance swim ever!  PBd by 21s and without putting a huge amount of effort in; 9th in age group too.  Quite pleased with that.  The run up to transition was a long one, thankfully it was compulsory to take off wetsuits before running up the stairs to transition.  My choice of racking point, although easy to find, meant that I had a long ol' run to get to my bike, but a shorter run on cleats from there to the bike exit.

Helmet on, followed by race number belt, bike shoes and sunglasses.  Bike unracked and then a trot off to the mount line.  A two lap route, with some roundabouts, undulation and the Limehouse Link.  Fun! 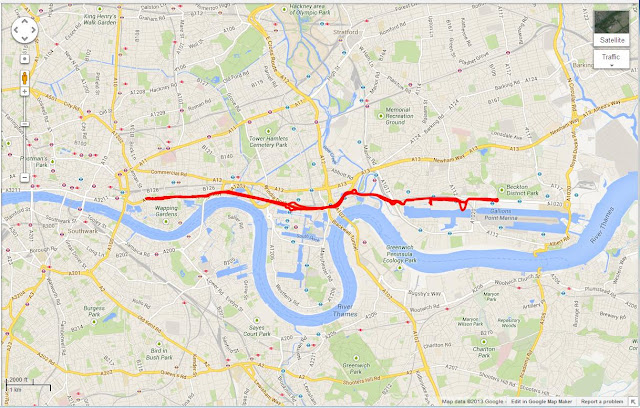 Garmin had a little trouble in the Limehouse Link tunnel, as you can see from the plot straight-lining below on the map... 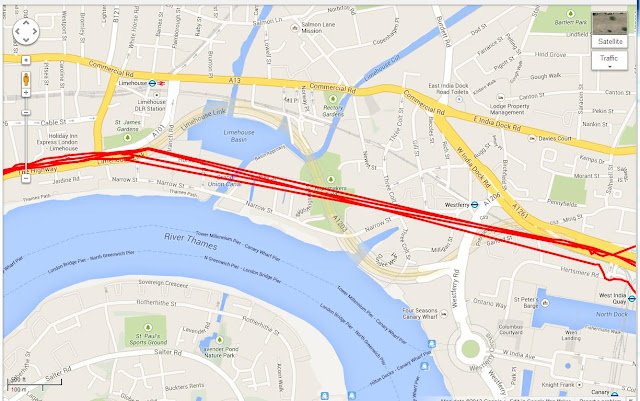 And I was *shifting* on that course.  Yes, it was a bit windy and I got a good few hard gusts that pushed me across the road a couple of times.  But I had some fun and I got up the confidence to let go through the Limehouse Link and let the speed really pick up - the shame is that Garmin loses coverage through there so doesn't show the speeds I managed through the tunnel - reckon I probably gained an extra 15kph on top of the speed I was doing entering the tunnel (you can see the blue line on the graph stops each time I go through the tunnel - 6 times in all).

I got back to transition to find my bit of the racking void of other bikes, the odd one hanging but really only the odd one.  I felt great - in an "on the edge" kind of way at times due to the windy gusts and the speed through the tunnel down on the aero-bars and with no way to get to the brakes in an emergency - but I did ease off a little at times, so I know I could have gone harder.  I did remember to get into a low gear before that nasty little trick hill up into transition at the end of the bike, but slipped gears quite a bit and worried myself that I might fall over like a couple of ladies did in front of me on Saturday.  1 hour and 8 minutes, only a minute quicker than 2011 where I had had no idea about anything, had done the odd bit of cycling and was on a road bike.  That said, it was quite a bit windier this year and I did come in 4th in my age group this time.  I'll take that.


The run was a 3 lap course this year, only 3 times up the slope into transition, but a lot wigglier, and hot and windy too.  I felt horrible throughout the run, but while I was doing it I completely forgot that if I feel terrible, it means I'm not slacking on effort too much.  So despite failing to be able to get my heart rate to go over 170bpm (proper effort running at that distance puts me 180bpm+), I managed to PB the run by a couple of minutes over my all time Olympic and several over last time on a course & conditions that have been recognised as a bit tougher than 2011. 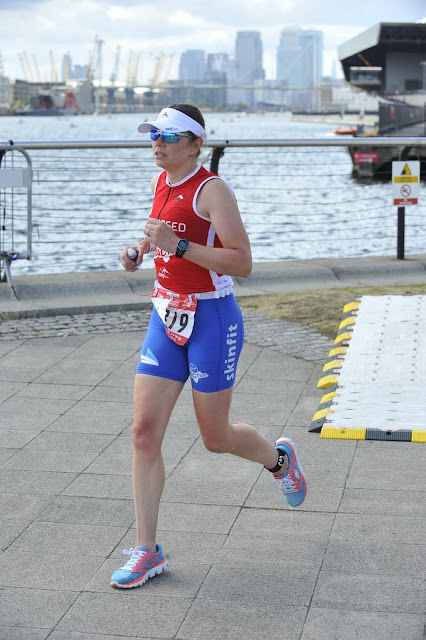 Over the line in 8th place in my age group, up from 32nd in 2011.  I think I'm happy with that, given I've not been training for this distance specifically, but for 70.3 really.  It's a shame I have no finish line photo, but I do like this one from the run course. 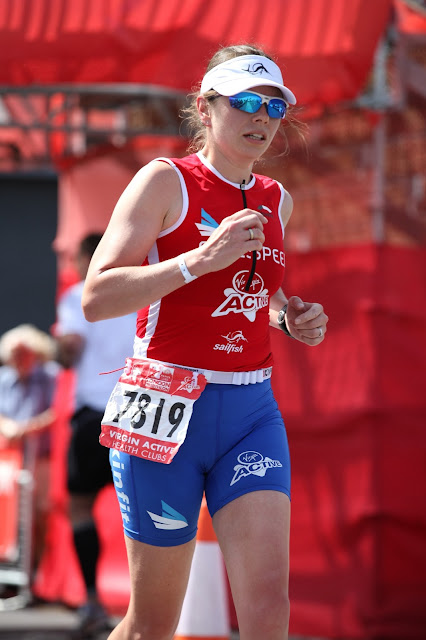 All in all, it was a great weekend and I really really enjoyed it.  Above and beyond my own racing and having fun with the team around the expo etc., Mr TOTKat got out and raced for the first time since IM Wales last year (knee injury for months since a half marathon in October); he had a great race, hit his goals and I'm really happy for him too!