Being quite inexperienced at proper training, I haven't got a good grasp of what a hard week is.  Last week was one of them, though I didn't really notice at the time.

Still quite fatigued from RideLondon 100, I had one normal rest day then back into the swing of things with a peppy hour or running intervals, then a bit of a hiccup with a day when I just couldn't fit anything in.  Thursday had an hour of bike intervals on the gym bike, then another set of intervals on the road to get my bike back home from Mr TOTKat's office after RideLondon.  Friday, more bike intervals, even harder ones this time.  Friday, we packed up the car and headed off into Surrey for a weekend away.  Saturday was a bike trip to Farnborough station to catch the train to Winchester for parkrun then riding all the way back up the A30 (route planning fail early on in the ride) to the hotel, along a fairly rolling terrain and with intent to get back at a reasonable pace.  I was whacked!  We stopped for a tea and some fuel half way back (only 65km ride!) and mashed the rest of the way, giving me a few Strava KOMs on the way. 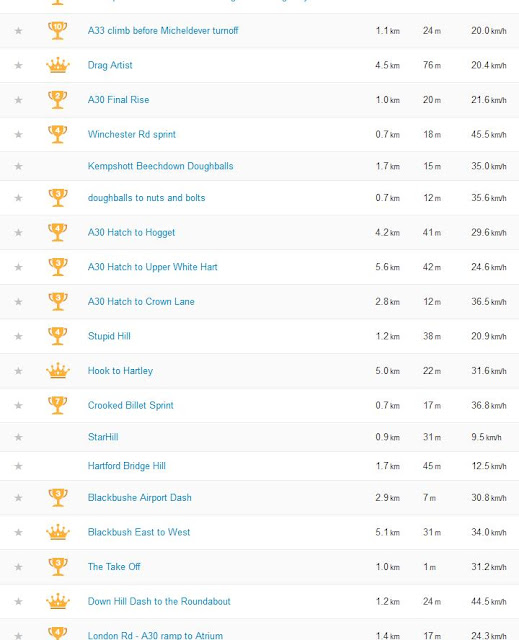 The plan was to have afternoon tea, a nap, then a swim before dinner.  And we did have a fabulous afternoon tea, but were running late enough that the nap was only 10 minutes long before I had to go for a scary looking swim set that included butterfly in the warm up!

This resulted in a bit of a failed swim... I cut out a chunk as I was supposed to be doing descending sets after a substantial warm up and I was simply knackered.  So I did about 3/4 of the session and called it a day.  Just about enough time to get showered and changed for dinner.

Sunday morning had a hard run set planned.  A really nice warm up and then progressively faster and shorter multiples of 400m laps of the rugby pitch (which was de-turfed and being rotavated at the time).  Through lack of familiarity with using the lap function on my Garmin, I made a bit of a hash of it, but still I managed to mash through the session despite feeling like spewing after the first 1600m interval and not wanting to carry on.  10km warm-up plus intervals later, I was done; a sweaty heaving mess, but done.  Time to get back to the room, shower and have breakfast.  Letting the gorgeous breakfast go down a bit, we packed up and checked out before going to The Spa again for another swim. 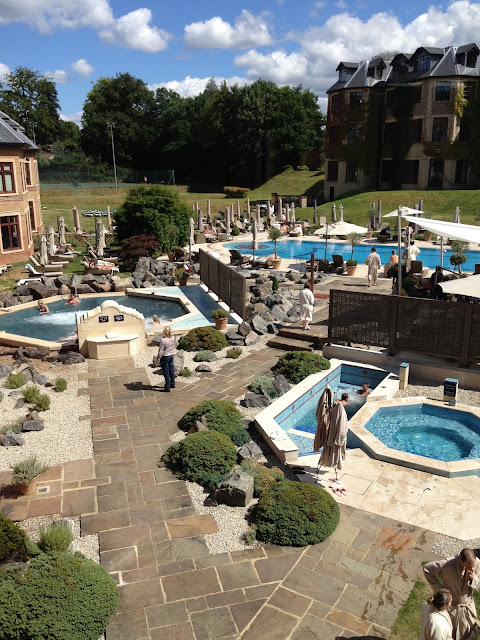 50m into the warm up, my arms were saying uncouth things to me about what I was asking of them.  This particular session included 8x25m butterfly in the warm up.  I've not done butterfly since I was about 9 or 10 years old and I wasn't any good at it then.  I wasn't convinced I'd be able to get my arms out of the water and that I'd look like a total idiot.  Turns out I can do it for a couple of lengths at a time!  Anyway, given how tired I was from back-loading the hard training to the tail end of the week and not really recovering much from some pedal mashing at RideLondon for a few hours, I called it a day before really getting into the main set of the swim and we sat beside the outdoor pool in the sun for a bit to dry off and have a drink.

Chatting through the week with my coach on Monday night (rest day!) he did say that this week might look innocuous on paper, but after last week I would still be tired and there are a few tough sessions in there that will really add up.  The whole plan was to tire me out and pile on the fatigue some more this week to get me used to pushing hard while I feel fatigued.  Well, I can say with certainty that it's working 'cause this morning's swim times were terrible!