Usual 04:30 alarm; up, brekkie and off to park and register by 05:45.  This race, I was in the 4th wave of starters and quite far down that wave for start time.  [Start time at these races is seeded by overall estimated completion time, wave 1 being slowest, 4 fastest; then by estimated 400m swim time, fastest first in the pool.]  So from registration time, I had a 2 hour wait before getting into the pool to start.  Thankfully there were some nice people around to chat to, both competitors and spectators (thanks Rowe family, @abradypus, Danny), so the 2 hours passed relatively quickly.

I had my usual "I don't feel like this; I don' wanna get in the pool" minor funk before getting in and getting on with it.  My swim was pretty average and uneventful and for all my whining that I hadn't re-set my estimated swim time to something sensible, I was in a perfect spot in the swim - the guy in front never showed me his feet and the guy behind never got close.  I popped out of the pool, trotted into transition to my bike, which was nicely racked towards the end of a rack.

Shoes on, number belt clipped on - ARGH! IT'S SO LOOSE! - I tried to adjust it but the little loops that hold the loose ends were jammed into the plastic buckles and stopping me from getting it any tighter.  I tried a few times, managed to get it a little tighter, enough that it wouldn't just flap around on the bike, and then gave up.  Helmet and glasses on. Trot out to the bike mount line at the pedestrian crossing.  More errors!  I skidded about a bit trying to clip in my shoes and then was in a silly low gear as I spun up the wheels on the spur down to the main road.  I decided not to get down on the bars for that part as the traffic can be unpredictable there and I just spun out at a high cadence all the way to the junction before turning out onto the main part of the course, getting down on the bars and then getting into a better gear.

It was time to put some effort in, so off I went.  Slowing slightly for the roundabout at the short-end turn point, I started to wind it back up again for the run back down to the church and on to the flight of mini roundabouts in the villages.  Argh again!  There's a right-hand turn at a narrow point in the first village where there are often vehicles turning right.  Coming up to that junction was a very slow cyclist, with a bus stuck behind it, which also wanted to turn right.  No way to over or under-take the bus as there was no room and it was turning right, I had no option but to ease off the pedals and wait for the bus to turn right.  Argh!  It had to wait for 2-3 cars to go past on the other side of the road before turning!  Never mind; on with it down to the left at the traffic lights.  No further incidents on the bike, strong, confident cycling down to the far end roundabout turn and then back, into a reasonably fierce head-wind.  I was over-taken by one, two, then three men on squashy bikes with whooshy wheels, but the third one (511) was only just pulling away.  He might be catchable!  A peloton of bank holiday cyclists went past me and interjected between me and race number 511.  They sat there for a bit, pulling away from me very very slightly and then eventually overtook 511.  Who then eased off!  Catchable!  So catchable, I eased off too.  Bah!

I caught him just as we eased into the bike finish funnel and then off to the non-compete zone back to T2.  We had a bit of a chat and I said I'd been hoping to go sub-40 minutes on the bike that day, but the wind and the bus had certainly put paid to that.  Oh well!

Back to T2, bike racked nicely in a huge gap where the people around me hadn't got back yet.  Shoe swap, helmet off, sun-visor on and off to the run out from T2.

Trotted down the road to the park entrance, being overtaken by 3 people who were quite nippy.  Into the park, up to the first km marker and then... oh dear god, the worst stitch known to humanity hit my right side.  I slowed to a walk and stopped.  Tried to breathe it out but it wasn't going, so started walking and trying to massage the muscles.  This was not good at all.  It just wouldn't shift and then eased a little, so I started to run again, legs feeling absolutely great, but the stitch sharpened again.  I passed Mr TOTKat and @abradypus at the water station and quite vocally explained my predicament as I passed them.  It went on; run, walk, run, walk for the next 2km up to the corner which was just under 2km to go.  I don't know if it was Rob telling me "just under 2km to go" that made the magic happen, but the stitch went away completely and I started to run properly again.  It just felt so good in the legs and lungs I really wish that stitch hadn't happened.  I motored on in to the finish line and stopped my watch.  01:21:27 - I'd started it early in the pool and it included the non-compete zone between bike and T2 so I had no idea what my overall time was.  I really wanted to beat 40 minutes on the bike and really wanted to beat my previous PB of 01:16:14, but was pretty sure I hadn't.

After a chat with Liz Pinches and Richie Thorpe, @abradypus, Mr TOTKat and I ambled back to the pool for some tea and a bacon roll.  I went to print my results while Mr TOTKat scored tea and food up in the cafe.  And there we go.  I smashed my bike PB, by 3 minutes, despite the bus and the wind.  And I beat my overall PB by just under a minute too, despite the awful run and average swim.  3rd in AG, which is OK I suppose.  7th woman on the bike overall, which is OK I suppose. 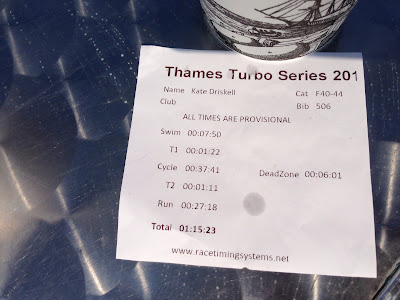 Not a bad day, not the best day, but I'm thinking Zell Am See may well turn out interestingly.  Hopefully I'll've got all the crappy luck out of the way and no more stitches!

I really really wish I'd not had that stitch; I wish I knew what the run could have been.  I'm thinking it could have been around 25 minutes, but I'll never know.
Posted by TOTKat at 12:37