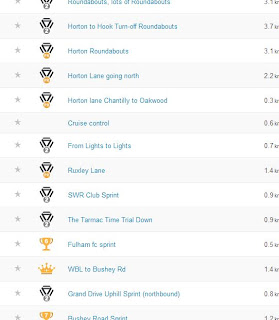 Last week was, on paper, the last of the big training weeks this year.  The message from my coach was "get your head down and get through it".  So.  I did.  And, come Sunday's 3.5 hour bike ride I was knackered.  My hamstrings were already battered from still being unused to the new set-up on the Fuji and having put in a lot of miles of bike work in the last fortnight from Ride London 100 onwards; 100 miles that day, a few gym bike sessions during the week and a ride home, then a 65km ride from Winchester to Bagshot, some more quality gym bike sessions in the week, then a 3 hour ride on Saturday.  Sunday, I headed out for my usual 3 Hills route in Surrey with quite some fatigue, but it felt OK.  I wound it up gently at the start and then hit Hungry Hill Lane with less horror than usual at the terrible road surface, ground up Staple Lane in my second fastest recorded time, followed by the same performance up Crocknorth and then PBd chunks up to Box Hill and some of the segments up the hill and then all the way home from there.  Even fatigued and with hamstrings on fire, the grind seemed less difficult up the hills and I felt able to push through the discomfort and tiredness with more than usual ease.  This is exactly how I felt in the latter stages of Ride London; tired but with plenty of power and drive left.

On paper, this has been the most successful (unsupervised) training week since Galway last year... only one missed swim:-