In November last year, I had a test done.  It was a test to see where I was in terms of how I use fuel during exercise.  The thinking was that I'd like to try to optimise to burn as much fat as possible and as little carbohydrate in order to make race fuelling easier, both in practical terms and in terms of being easy on my poor stomach after the experience I had in Bolton in 2012.

I turned out to be a reasonably good fat burner and I used the numbers to test the theory at the London Ultra in February this year.  Wind forward a good few months and I wanted to see what, if anything, had changed on a diet that had evolved a little to between 50 and 100g carb a day rather than the draconian <50g a day I started with last year.  I was slightly apprehensive that the slipping into very weird habits (eating cake a couple of times a week when I've never been that much of a fan!) and going a bit off the leash on a semi-regular basis since starting a new job in March might have ruined things a bit.


So... this stuff is both simple and complicated at the same time.  You may already know a lot of what I've written below, but here it is just in case.  (Also lots of it is very personal to individual circumstances, genetics etc. and lots of it/almost all of it has not a lot of hard research behind it, but we do the best we can.)

The simple bit is that the "best" way to improve your fat burning capability is in a gentle and controlled way. Just go out and run/cycle.  Even with all the technical information in the world at your disposal, there is nowhere near even 1% of the information we'd need to get this sort of thing absolutely right without some empirical, individual experimentation.  i.e. go out and do longer and longer runs at the target pace, carry emergency nutrition with you, but aim to complete the run without consuming it.  If you hit the wall, obviously eat/drink.  Take note of the results.

Most of these factors may be altered through nutrition and training.  The "may" is more than likely genetic and there's not a lot of info about on the likelihood of whether a person may be able to alter the factors, but it appears that the majority of people who end up in elite/professional sport are able to and do do so to some extent or more.

The effort level for a given ratio of fat to carb can be altered/improved by any or a combination of these things over a period of months:-

From personal experience, I have found the first and last points to be the most effective in moving the thresholds in the right direction for me.

If you are particularly keen to switch your brain fuel from glycogen to ketones (i.e. from carbs to fat) you would have to be very very harsh with carb restriction; usually under 30g a day for around a week or so; during this time you're likely to feel fuzzy in the head, irritable and need more salt than usual.  The general effect of switching brain fuel is twofold: you reduce the impact on your emotional wellbeing when you do push hard and run out of glycogen, and secondarily it appears that you may be able to then access more of your body's glycogen stores and deplete them even more than usual when your brain runs on ketones.  Again, from personal experience I have bonked on a very low carb diet (after 6 days training camp, doing approx 8 hours training per day) and instead of wanting to sit in a corner and cry, I just couldn't get my legs to go at the speed I wanted them to, no pain or distress, they just refused to go quickly.  A much less stressful result.

If you have the time, spare cash (around £165) and/or inclination, you can get a test done, like I did, that gives you an idea of the ratios of fuel you personally burn and at what effort level the ratios change appreciably.  It's called a "gas analysis test" or "metabolic efficiency test" and the test is done on a bike or treadmill while strapped into a mask over your mouth and nose.  You start off at an easy pace for a warm up, then the recording starts of your heart rate, pace/wattage and the amount of air going in and the volumes of CO2 coming out.  The effort level gets increased every few minutes in steps to a reasonably hard level but not absolute maximum (this is not a "max test") and then the data collated and analysed.  You can then do some calculations on how long and at what effort you could safely run without needing to top up the stores and if you do need/want to top up you can work out how much and how often.  This is what I did for my 50km Ultra race in February and I calculated that at a heart rate of around 160BPM I could conservatively go for 6 hours before I might need to top up.  I ran the race at a HR of around 170BPM in 05:50 and kept pace the whole way around, no sign of legs ignoring me.  Oh, and I didn't eat anything at all, despite well-stocked aid stations full of goodies!

Now in the test last month, the numbers went in a good direction even further. 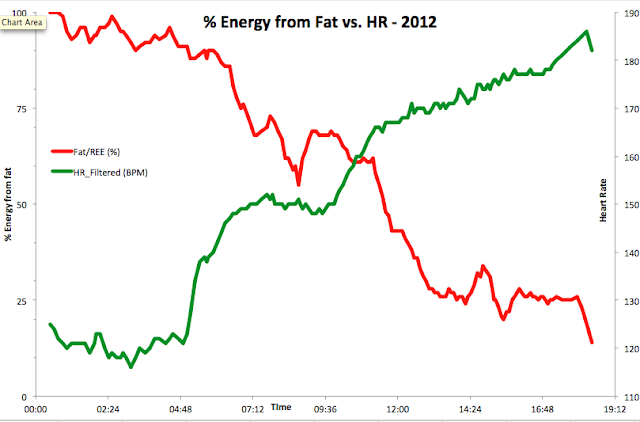 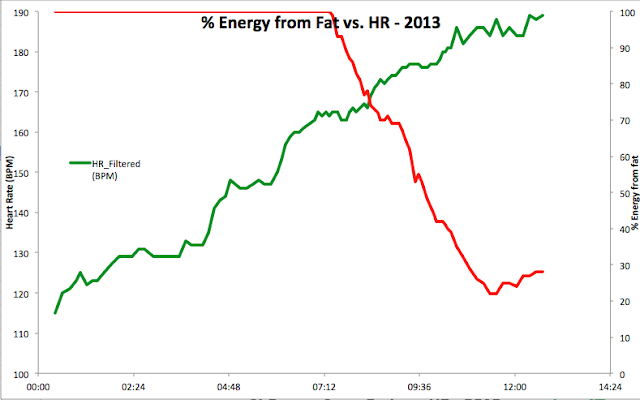 I'm burning 100% fat right up to a heart rate of 165BPM (on the bike) now.  That's 87% of my max heart rate (on the bike).  That's pretty phenomenal.  In theory, as long as I keep my heart rate under 165BPM, I could ride pretty much forever on my stores of body fat and not need to eat anything at all.  Apparently, this is fairly uncommon.  What's also uncommon is not switching fully to carb burning at high effort output - known as "going anaerobic".

The additionally interesting bit comes from the carb burn and how that varies, as that will tell me ballpark rates at which I get through my body's stores of glycogen and then at what rate I would need to replace them at in order to maintain that level of output. 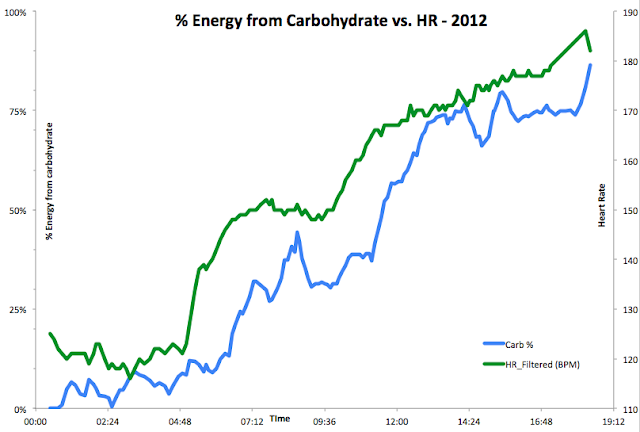 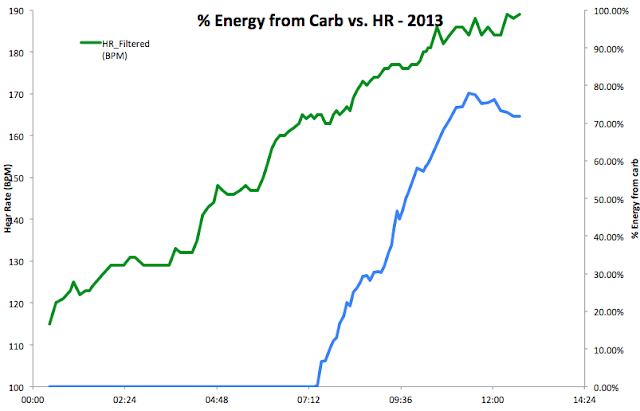 OK, so the graphs aren't useful for working that out, but the numbers are and the headlines are:-

So... in practical terms, what I'm normally doing now is eating my usual low carb/high fat diet right up until the morning of a race.  On that morning, I'll have a breakfast (3-4 hours before the race, so if an afternoon one, then adjust the time to match) of scrambled eggs, with avocado and cream cheese, or cured meats with boiled eggs and cheese, with a mug of tea - very my normal breakfast! During the race, I'll have water with electrolytes and that's pretty much it.  On a very much longer session/race I'll take something if I think I might just get hungry (cheese/nuts/cured sausage) and a fuel bar or two for emergencies (something like a Clif bar).  I raced a half ironman a couple of weeks ago and ate nothing apart from one speculative gel at the start of the run course, because I hadn't gone through the new data properly yet - turns out I didn't need it (lots of analysis around pace and heart rate during the race confirms that well enough for me to be happy with that).  And I raced pretty hard, so I'll take that as an encouraging data point for me.

What I'd say, to others who want to take steps into this stuff, is that if you have a few months to try things, do that and see how things feel - don't be afraid to add in a bit more carb on the day of the race, your body will use it unless you're pretty much walking the whole thing or are very very highly trained and run very slowly for your ability.  If you don't have a lot of time, I'd say have a normal breakfast on the day of a (longer) race and if you feel you want the safety net during a (longer) race, try something more natural with minimal sugars, or even home-made fuel bars where you can control the ingredients to things you know are fine for you.

For me... this all means I can experiment a bit and play it pretty fast and loose with taking on carbs during higher effort training and racing.  I've heard a number of accounts that state that once you're actually exercising, you don't suffer the usual difficulties related to insulin responses to carbohydrate , though there are some that say you need to be careful as if you do stimulate high insulin response it will interfere with your fat burning capability during the exercise.

At the end of the test, looking at the initial numbers, the tester summarised with "Endurance. The longer the better. You will have a phenomenal advantage."  Along with "Those results border on the freakish, I've rarely seen anything more extreme."  *beam*
Posted by TOTKat at 12:30