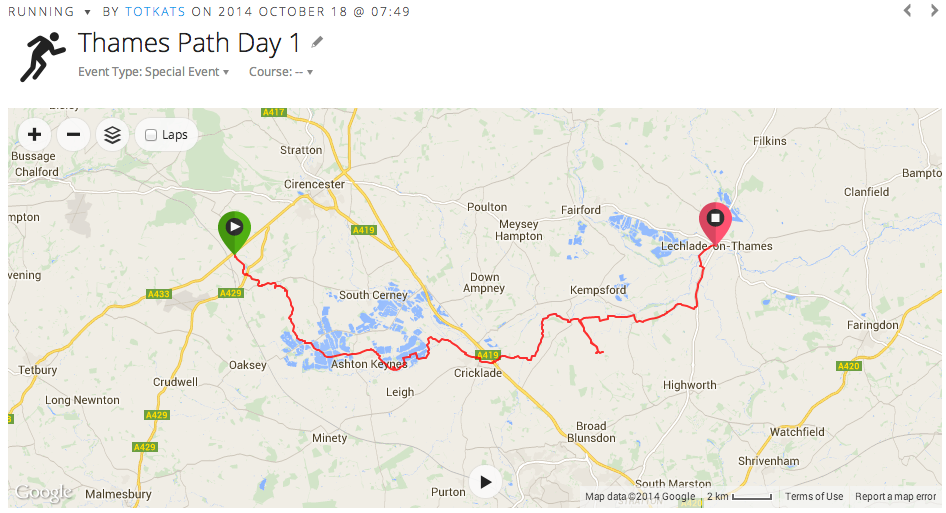 Day one, and my first job was to get from the pub I was staying in to the rock in the field which marks the source of the river Thames.  The helpful chap in the pub pointed me to a short-cut down through the back of the pub car park, down along the railway tracks and across it to the local tourist attraction.


This section of the path is extremely well marked.  There is not a single decision point which doesn't have a route marker to show you the way.  Passing through fields of slightly startled cows and sheep, I saw a huge amount of wildlife; crows, rabbits, pheasants, grouse and a couple of kingfishers once the river was more than the odd puddle or squirt of water in a ditch.

Having said the path is well-marked, day one saw the first and second of three times I went off course in the whole length of the path.  At one of the two road crossings near the start of the path, I missed a sign that indicated following along parallel to a deeper ditch-like route that I thought was the path but turned out to actually be the river bed - I did rather wonder how it was OK for a National Trail to be so overgrown with tree branches, until it got wetter and wetter and I scrambled up the bank to the left to find, oops, the actual path I was supposed to be on.  Injury number one of the trip incurred by being ripped in the thigh by brambles on the way up the bank.

A well-marked path for the first day was contrasted by lots and lots of wet, gooey mud and standing water.  Lots and lots and lots of it.  I'd made the choice to wear shoes that were very comfortable, grippy, didn't chafe, pinch or rub in any way and allowed for toe expansion and for water to escape should it get in.  Which means that water can also get in.  And it did.  So my feet were pretty wet all day.

Some of the local land owners in Wiltshire just don't like the idea of people traipsing over their land and there are a good few who make it clear to all who pass.  And I guess they're a bit fed up with badly controlled dogs distressing their livestock.


Having safely negotiated the lakes and quicksand(!) of the Keyneses (Somerford and Ashton) I managed to go off course by missing a really very clear sign to turn off the road and up towards Castle Eaton.  I had it in my head about the section of the path that's marked as a section you want to take a taxi to cover as it's a mile on a national speed limit road with blind bends; and I thought I'd hit that section a lot earlier than I'd expected in the day, so I totally missed the sign and trotted onwards down the road I was on.  For over a mile.  With no end in sight, so I had a bit of a freak out with the map and realised I was waaaay off course and had to trot all the way back for over a mile to Castle Eaton again when I was already quite tired and was really looking forward to stopping running.

No more eventfulness after that, thankfully and the trot into Lechlade was mainly along the edges of fields, through more wet grass and mud just to finish off the day with soaking feet and fantastically muddy shoes.  Day one; done.