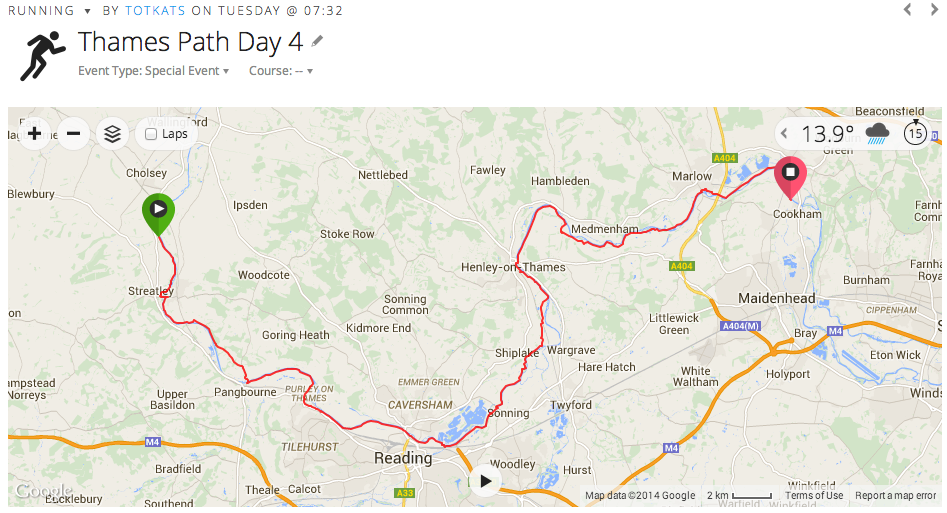 This was the day of Serious Wind.

Starting from the pub in Moulsford, I'd run today's route as far as Reading with Louise and then as far as just past Remenham as a recce trip but ended up having to short cut onto the A4155 to Marlow to get picked up - a good 5 miles running down a national speed limit road with no pavements.  That was quite a learning experience that day.  Anyway, it meant that I hadn't actually run the section from Remenham to Marlow before and having recced then from Eton Dorney onwards, there was a good chunk of today's route I'd not seen before.

I'd decided I was going to break up the longer days into two sections.  This is a holiday, you see, and not some sort of enforced torture-march, so I'm supposed to be enjoying myself.  Today's planned stop was at the cafe at Sonning lock. 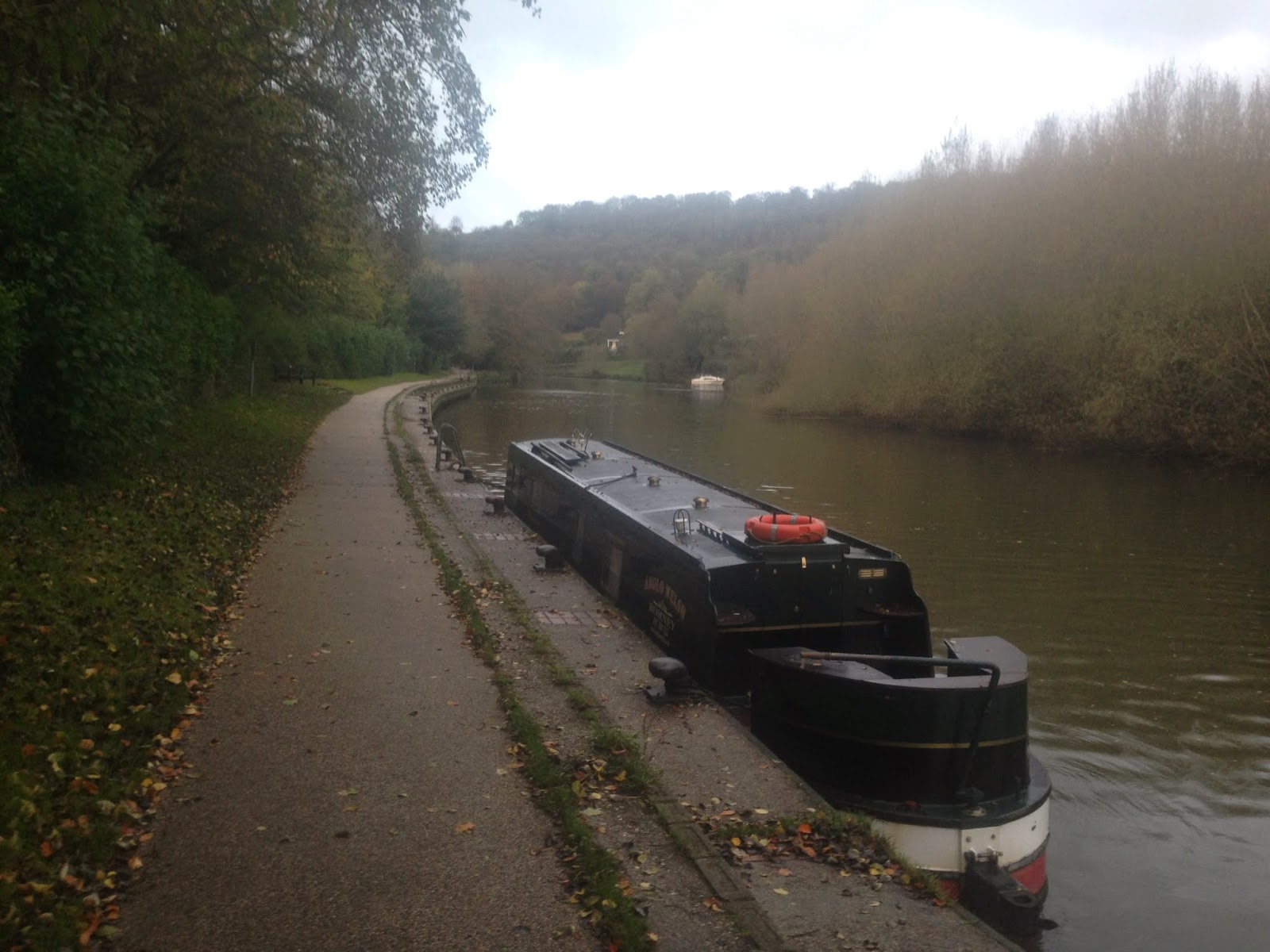 This was not only the windy day, but also the hilly section.  For a path that follows the river, there's a reasonably hilly bit up through Goring and Streatley which interfered a little with the continuing run: walk strategy of 8 mins:2 mins.  I've trained for flat, so the slightest incline is really hard right now. 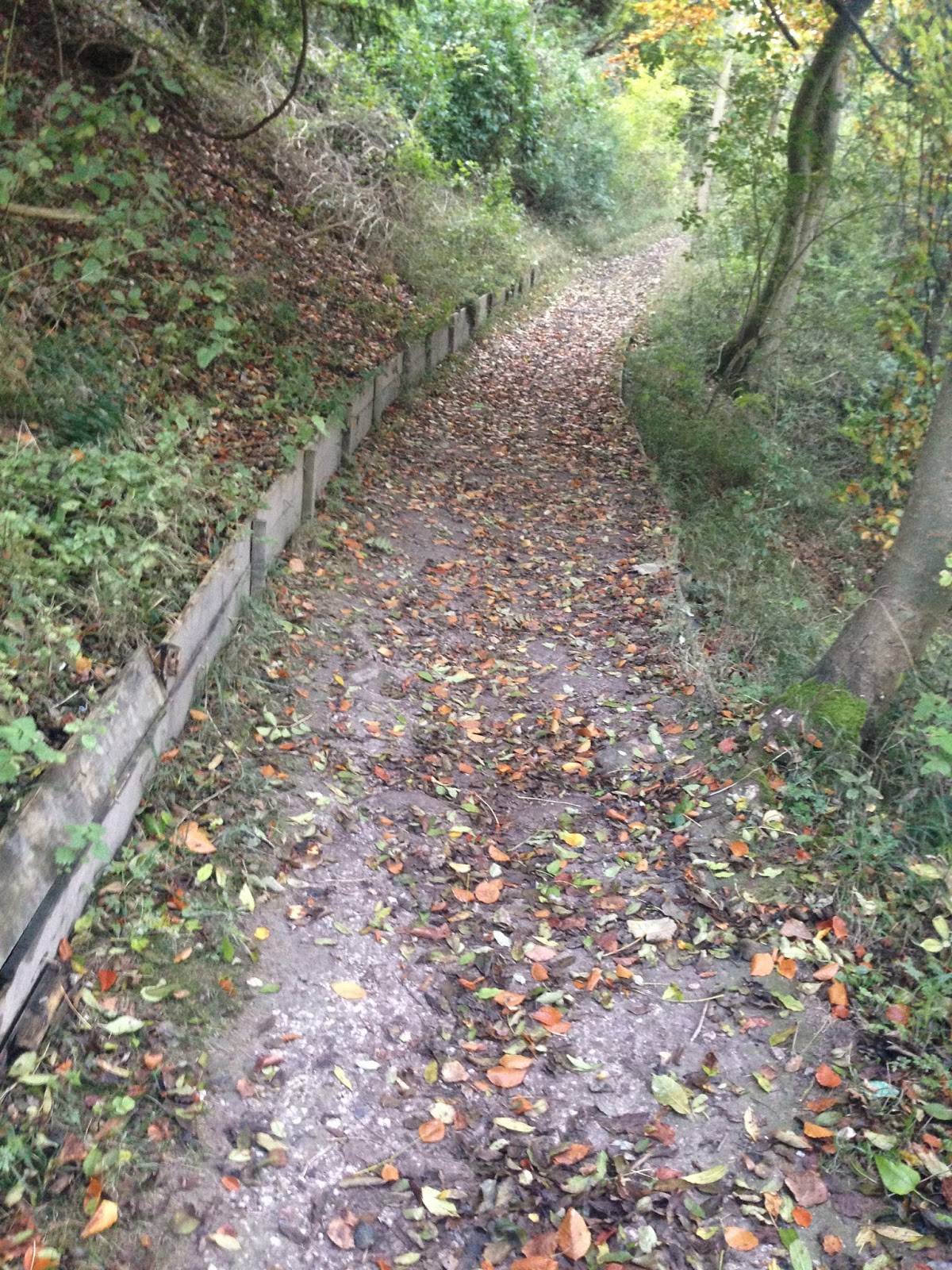 That may not look steep, but see how high I got quite quickly... 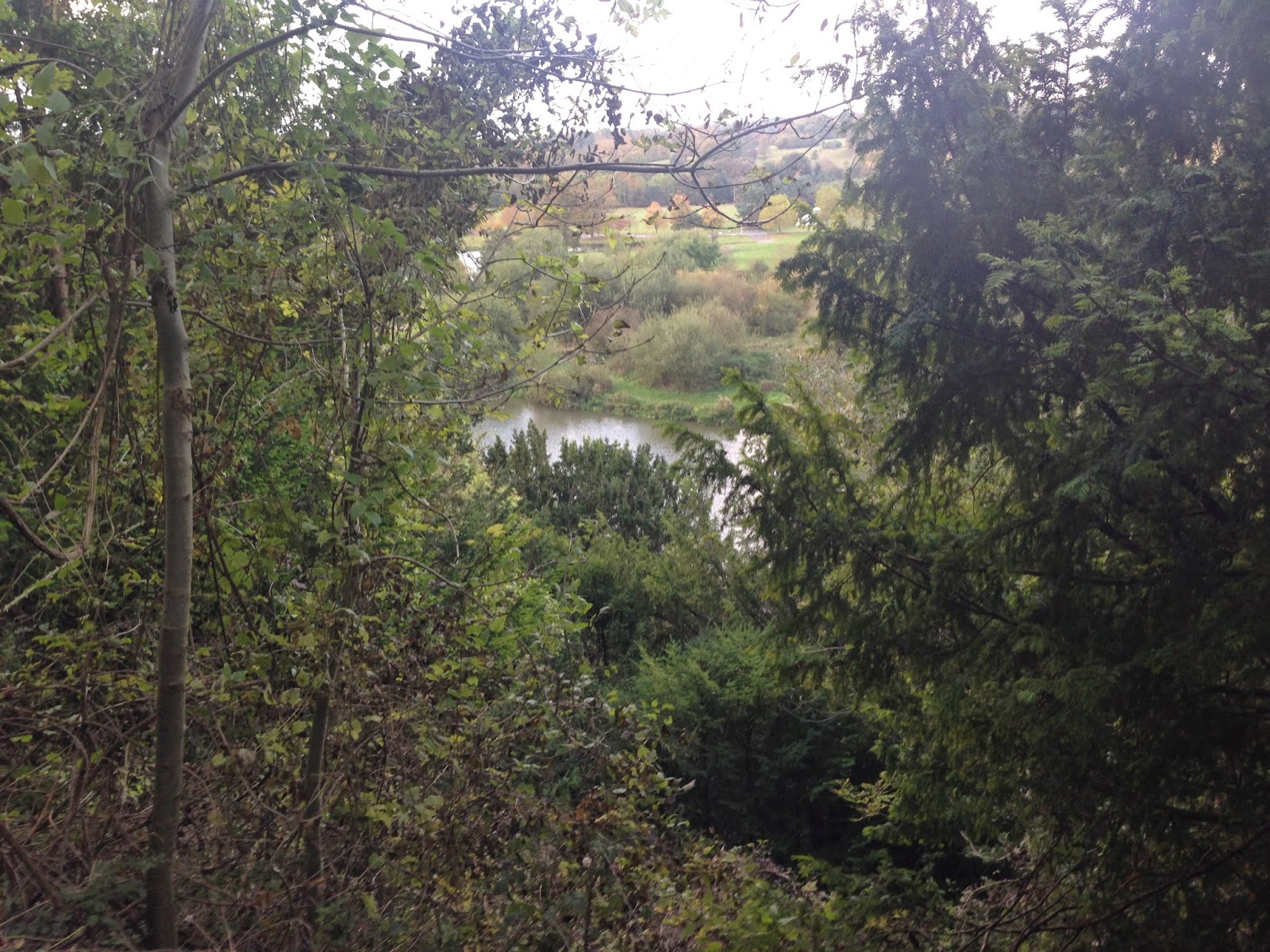 Another pretty, tree-lined section again today, and despite the wind there was a good bit of sunshine too, to lift the spirits. 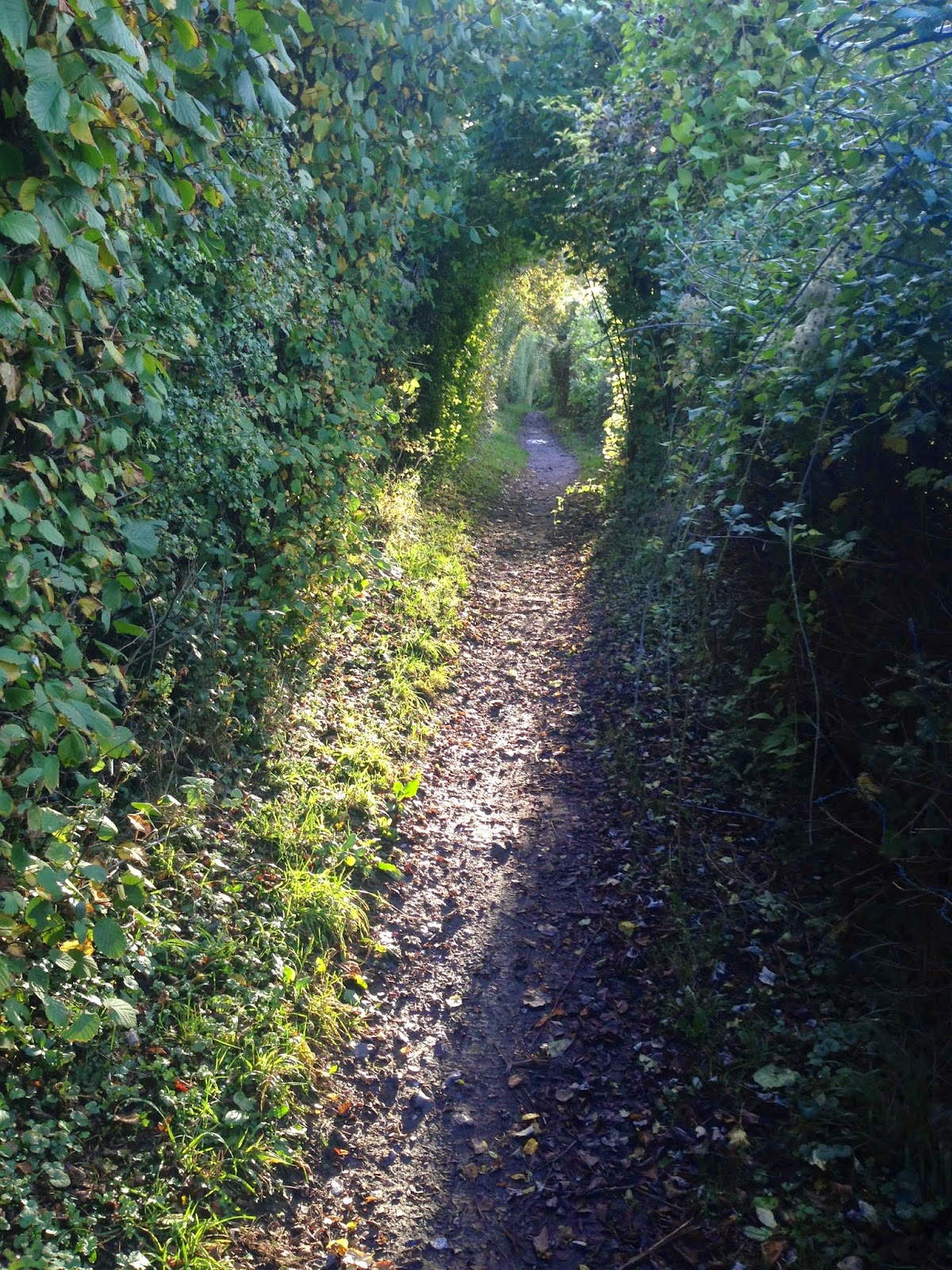 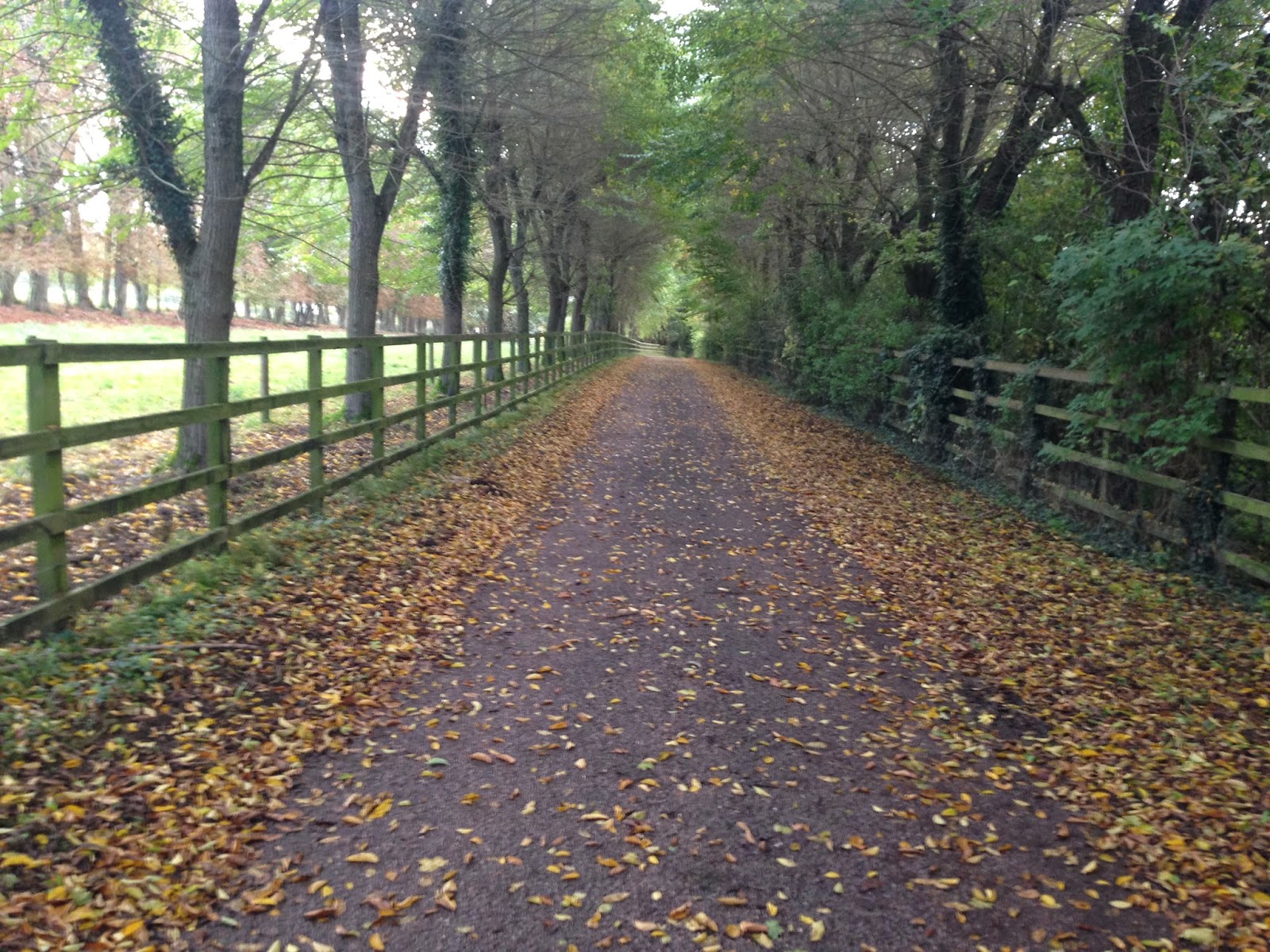 And then a long, long, long private road section that leads into Whitchurch. 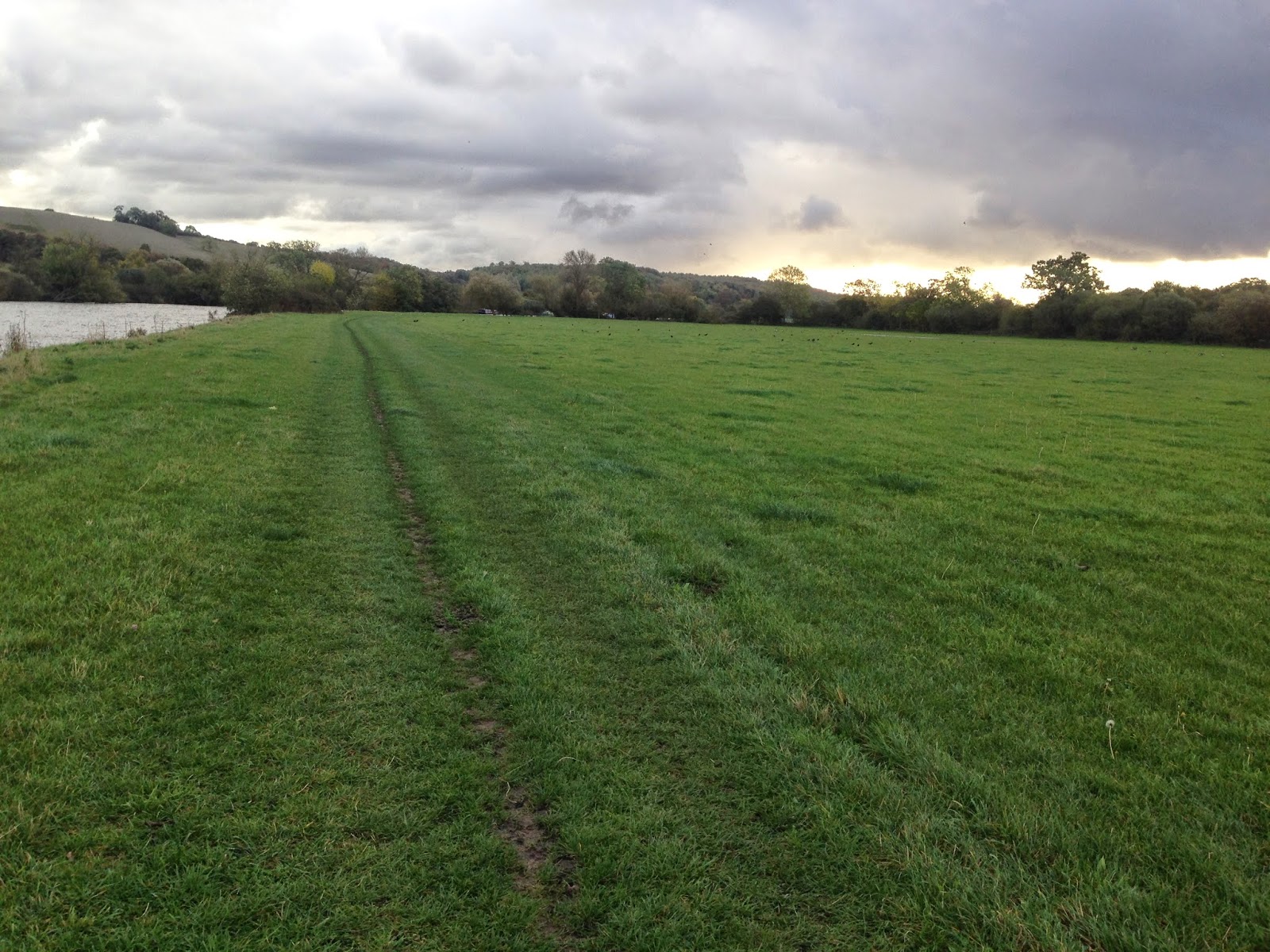 Some lovely flat meadows again on the approach into Reading, but they belie some quite uneven ground underneath the grass.  It *looks* soft and flat, but it's pretty hard on the ankles and feet. 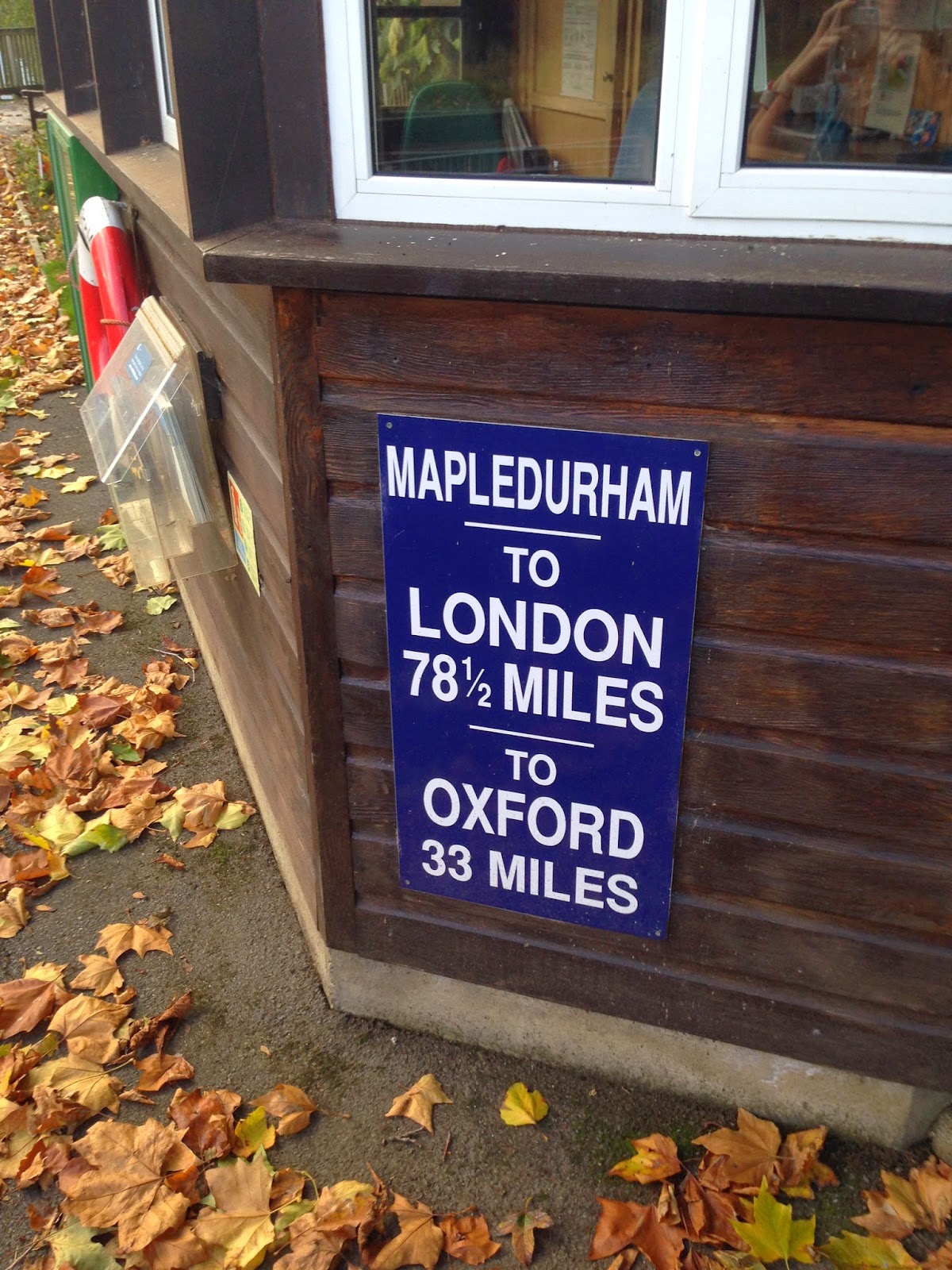 Yay. Mapledurham lock has a really useless distance sign on it.  Where does "London" start exactly? Is it to the edge, the middle, the City...? 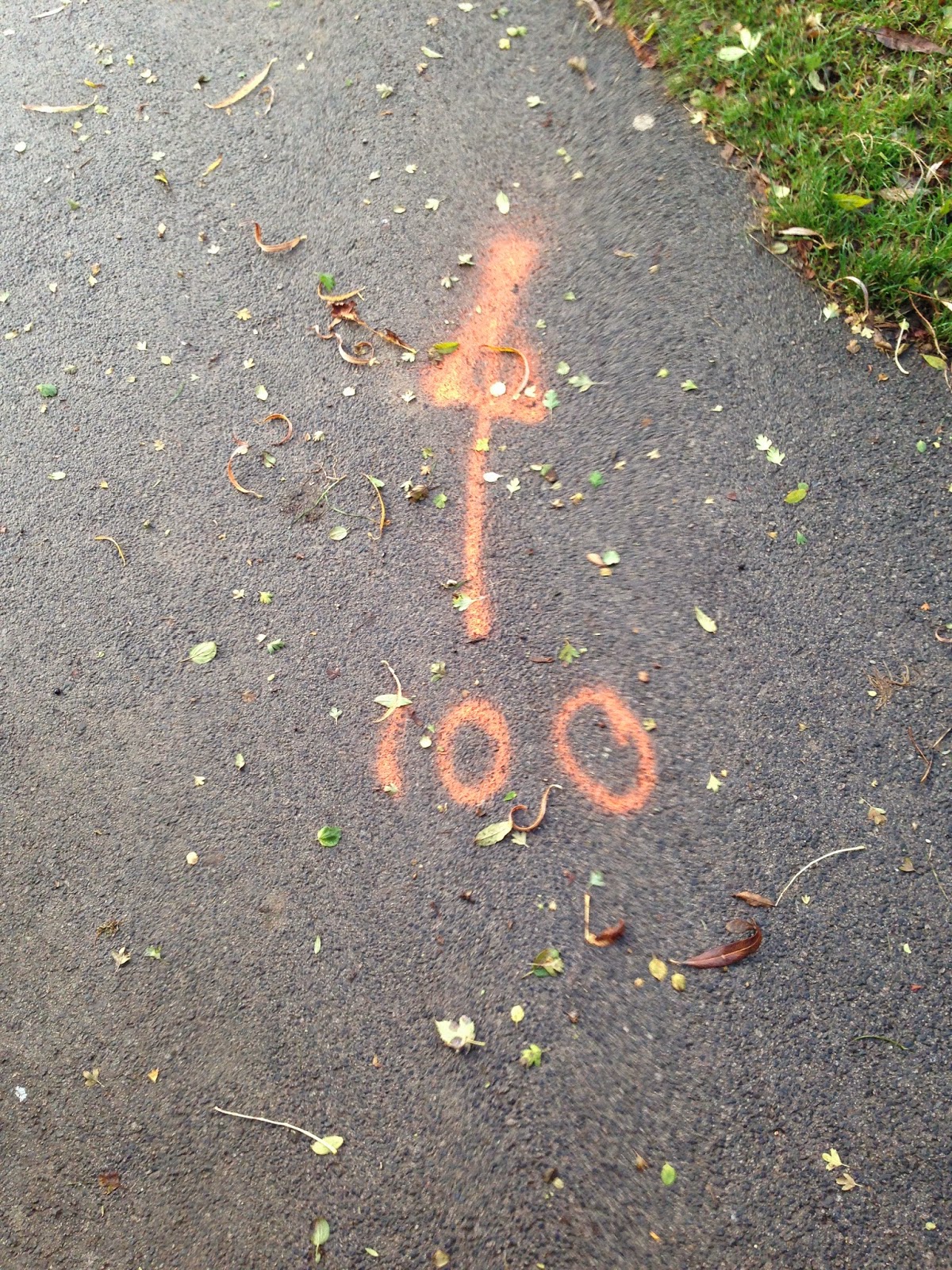 A more useful sign seen a few times through this area was the leftovers again from the Centurion Winter 100 race.  One of these gave me a great heads-up on a sharpish left to cross railway tracks at Tilehurst, thanks guys! 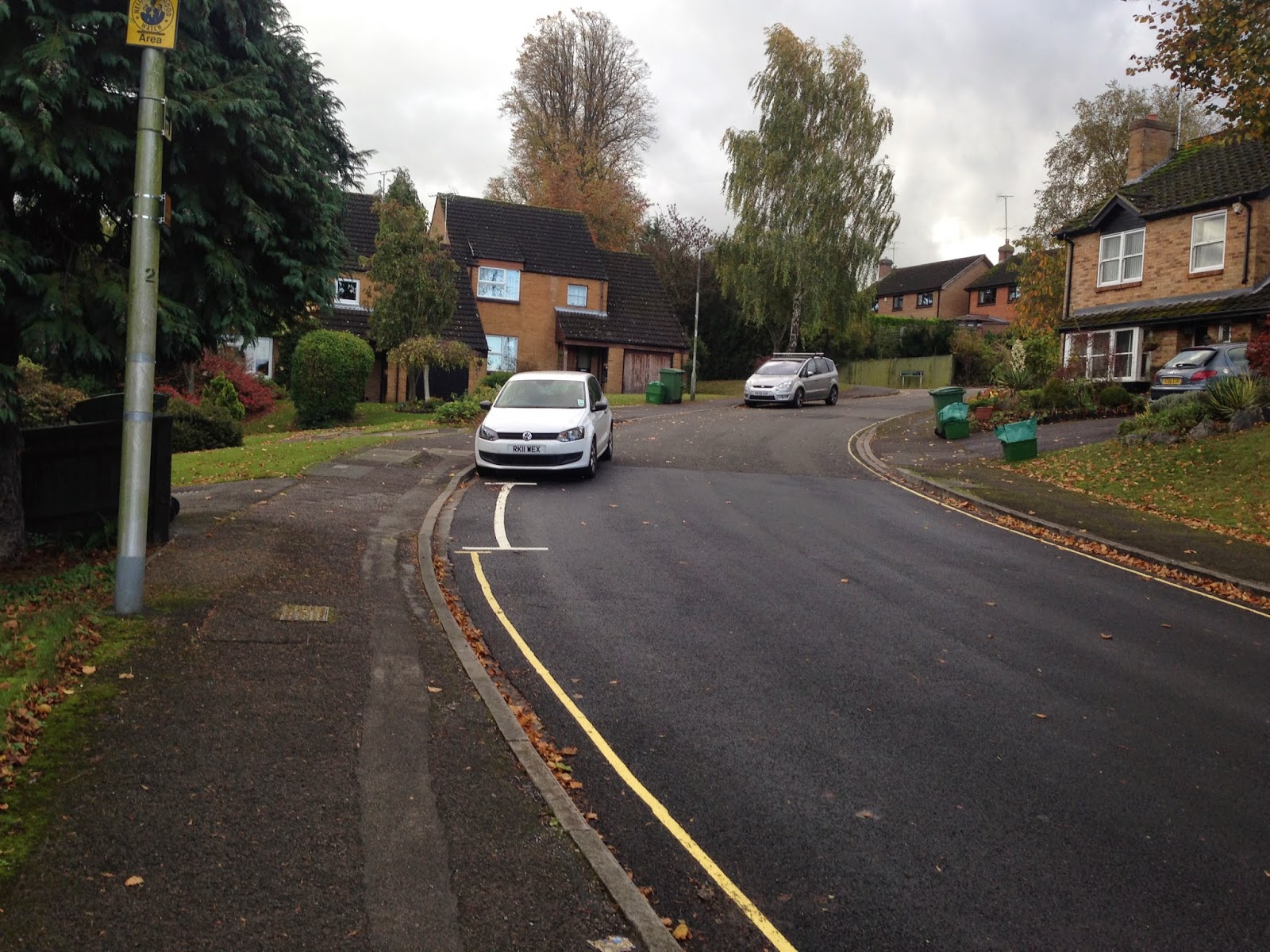 This bit of the path has a quite long section through a housing estate.  It's steepish in places and you feel like a right idiot hiking through a housing estate in full long-distance running kit with running vest/pack loaded up and soft water bottles flopping around like cow udders on your shoulders.  Well, I did anyway.  And this was the second time of doing it, having run through here weeks earlier with Louise.  I was very glad of that recce run, otherwise I think I might have been quite disappointed by this section. 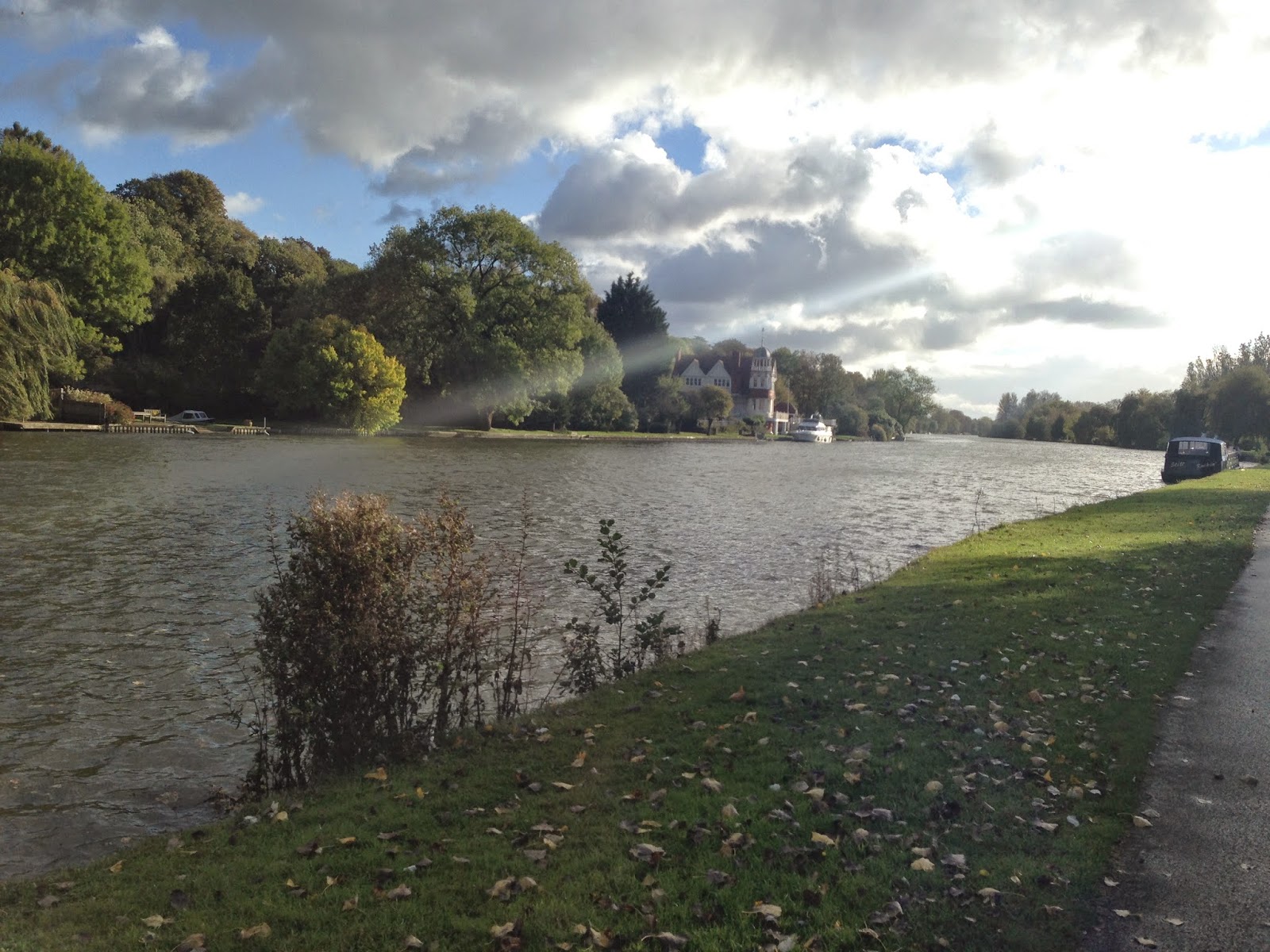 Popping out of the other side of Tilehurst/Purley-on-Thames, brings you into the Caversham-ish area and some really pretty bits of path again.  This section is concreted and that makes for a nicely dry run even if it has been raining quite heavily. 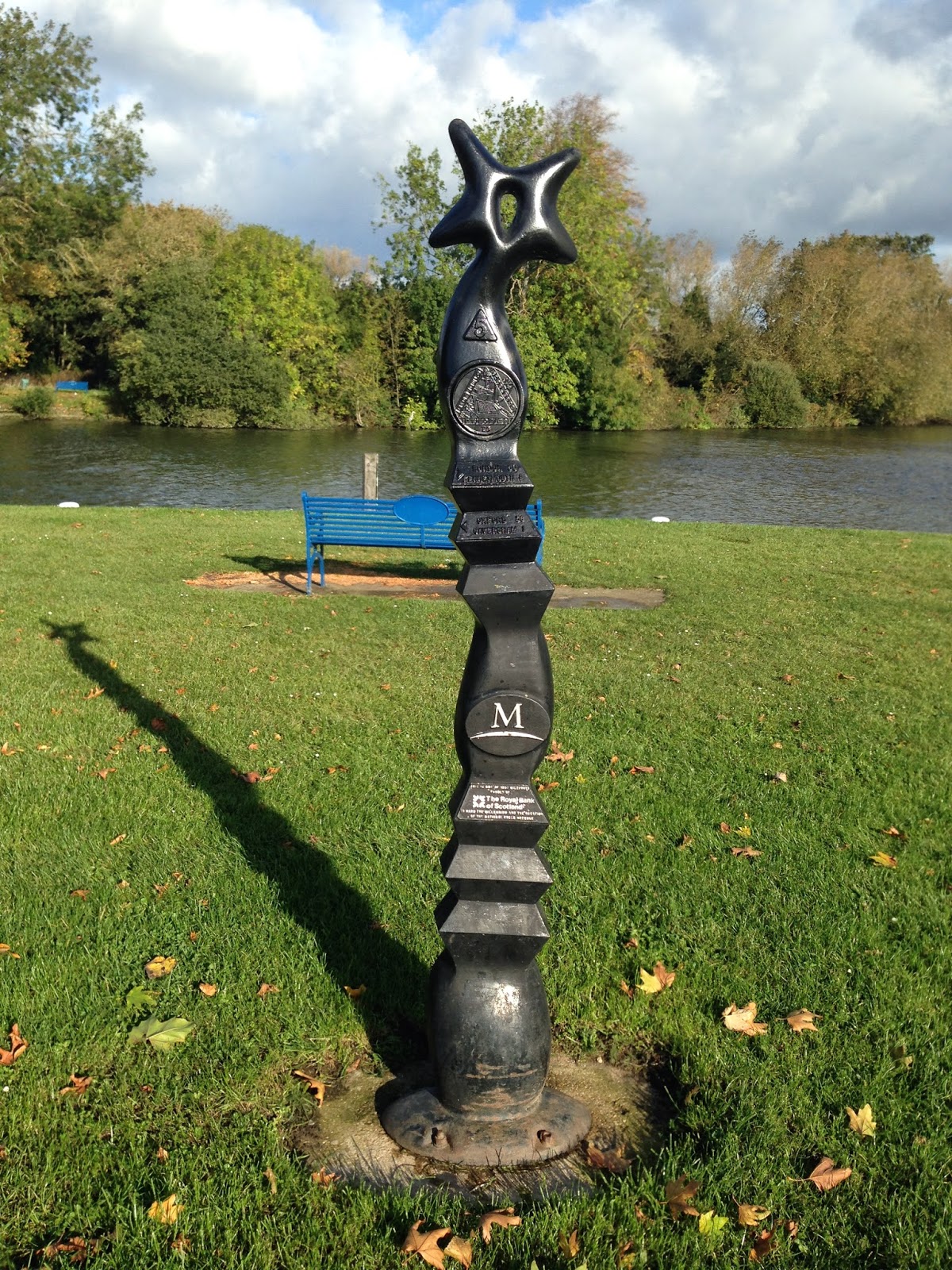 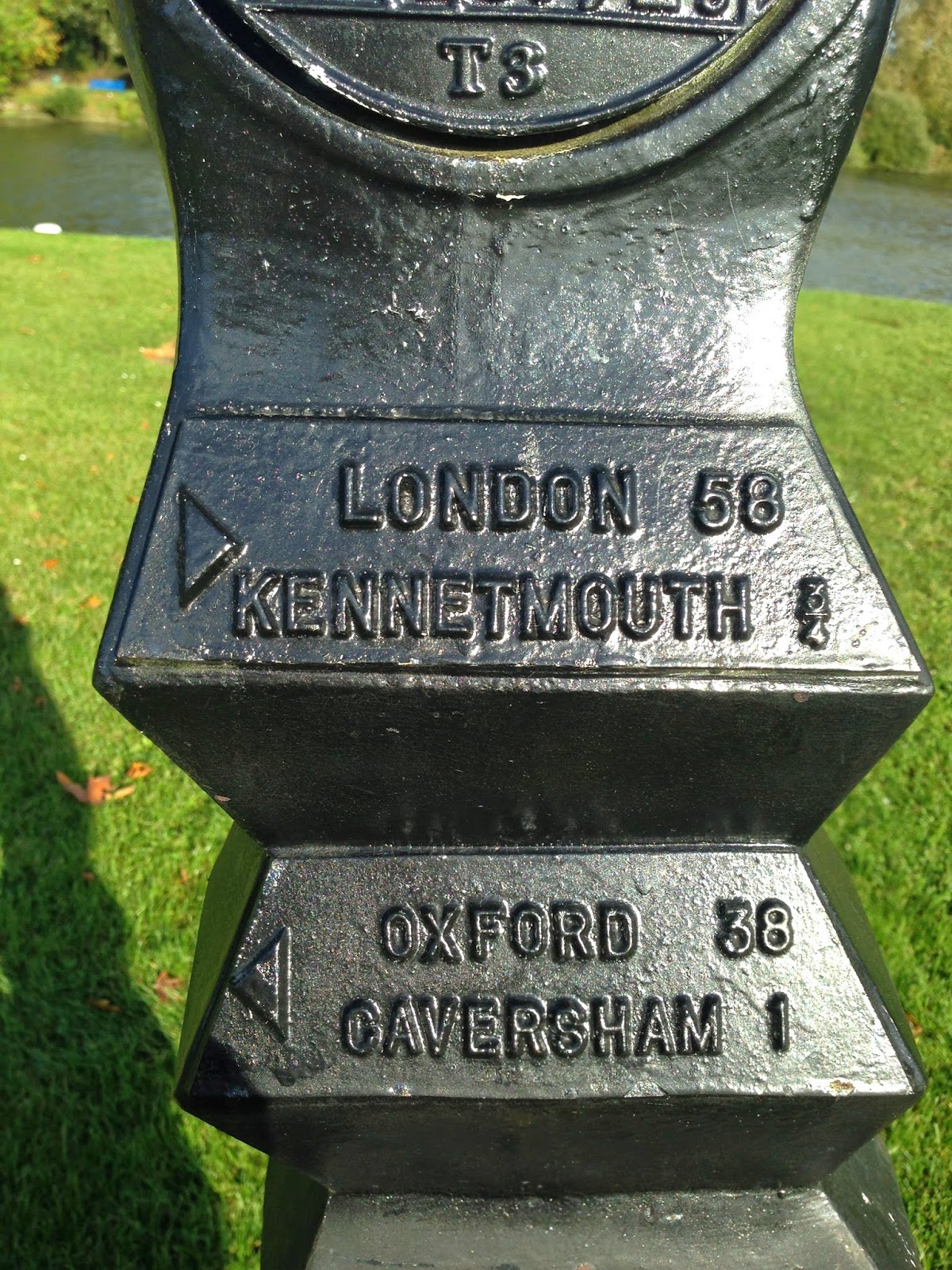 Wow!  London just got 20 miles closer in less than 5 miles of running; magic!  And soon, Sonning Lock hove into view.  It was shortly before 11am and the cafe opened in 10 minutes, so I sheltered in their lovely little riverside garden until the lady opened the cafe and apologised for lack of hot food. 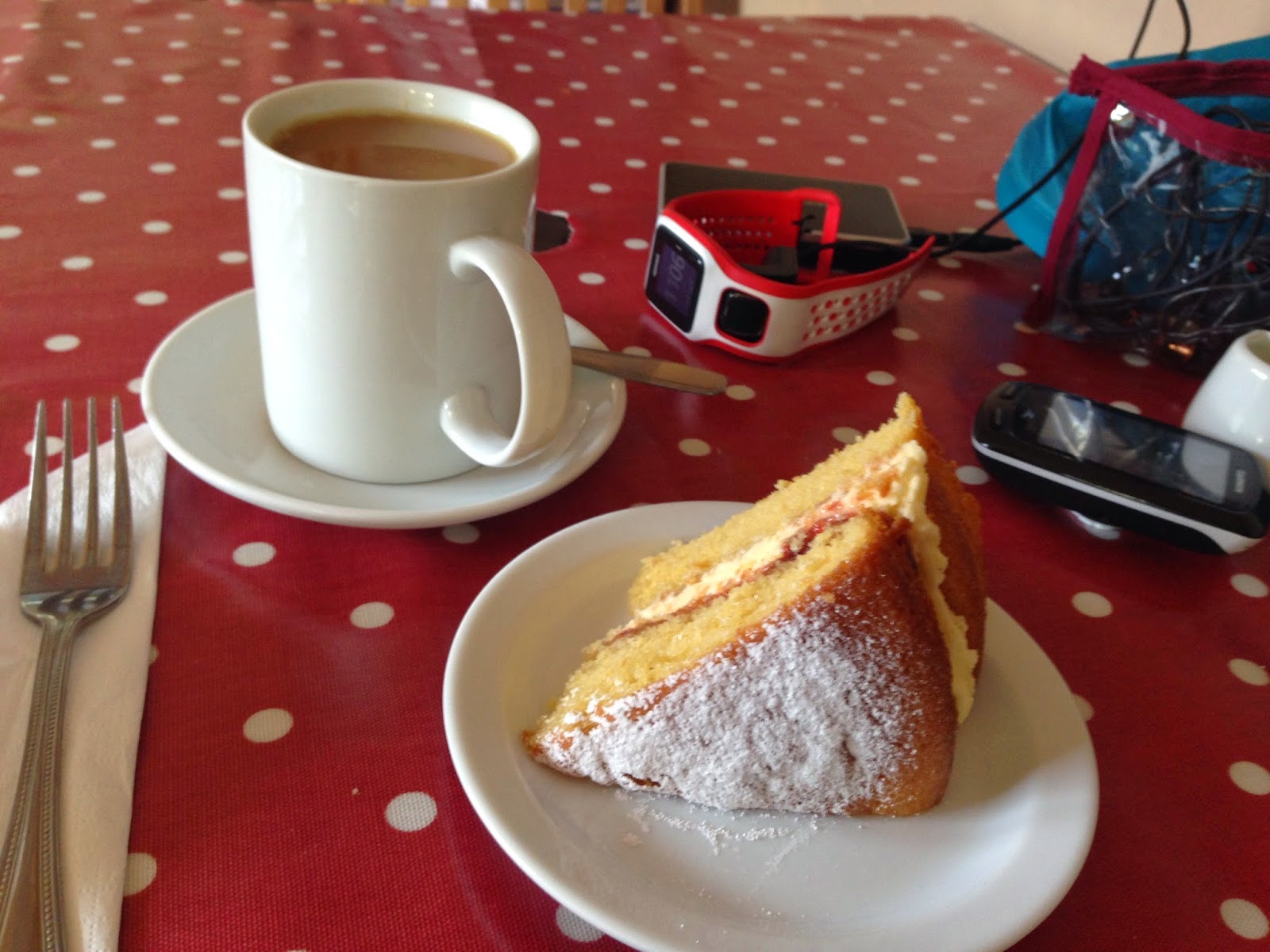 No mind; there was shelter, tea, cake and power for my devices.  Perfect.  Two mugs of tea, half an hour of device charging and a slab of Victoria sponge later and it was time to get back out and brave the gales some more.

Heading out into the pretty fierce wind again, part two of day four took me out towards another new section and one with some of the route away from the river.  Stopping always runs the risk of it being hard to get going again, though the day I ran 34 miles with a break in the middle for lunch, I really didn't have any problems with that at all.  Today, it was definitely harder.  With 3.5 days of running already in my legs, my hamstrings were creaky and my feet really very sore and achey.  It takes a while for things to warm back up again and the pain of my feet to get backgrounded by my brain. 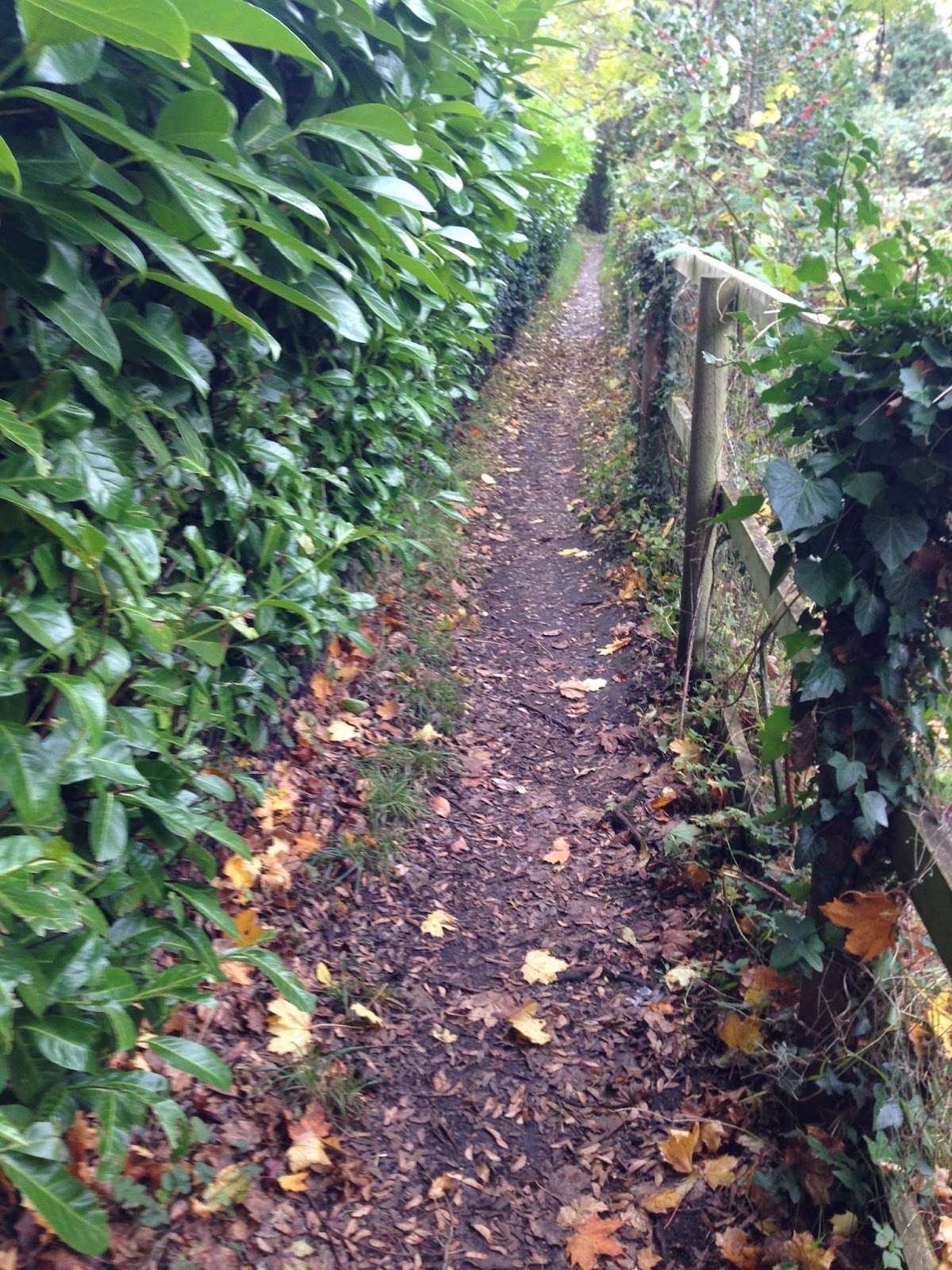 I love these little alleyways, especially when it's windy!  Though this little bit really feels like you're going through someone's back garden... 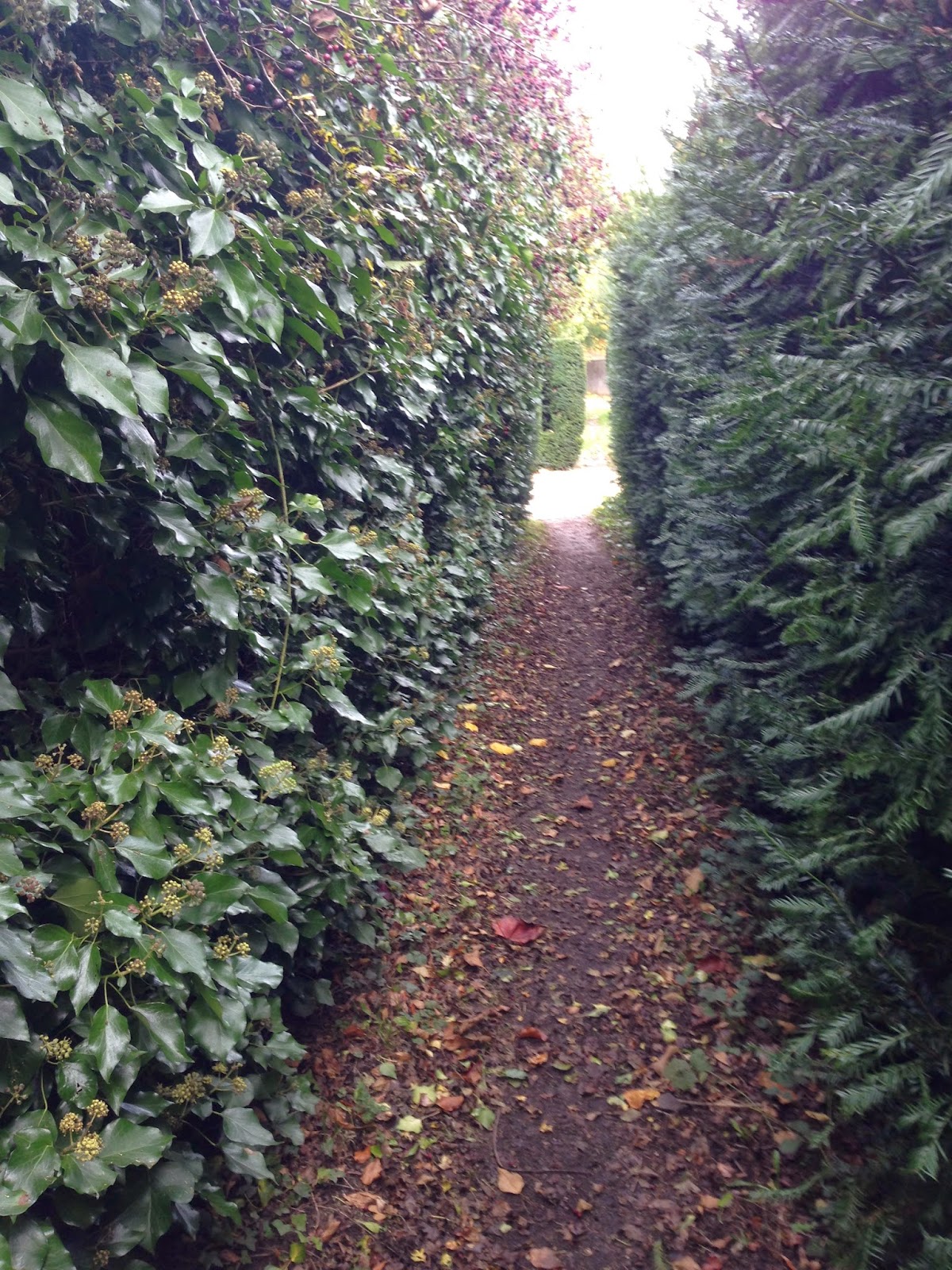 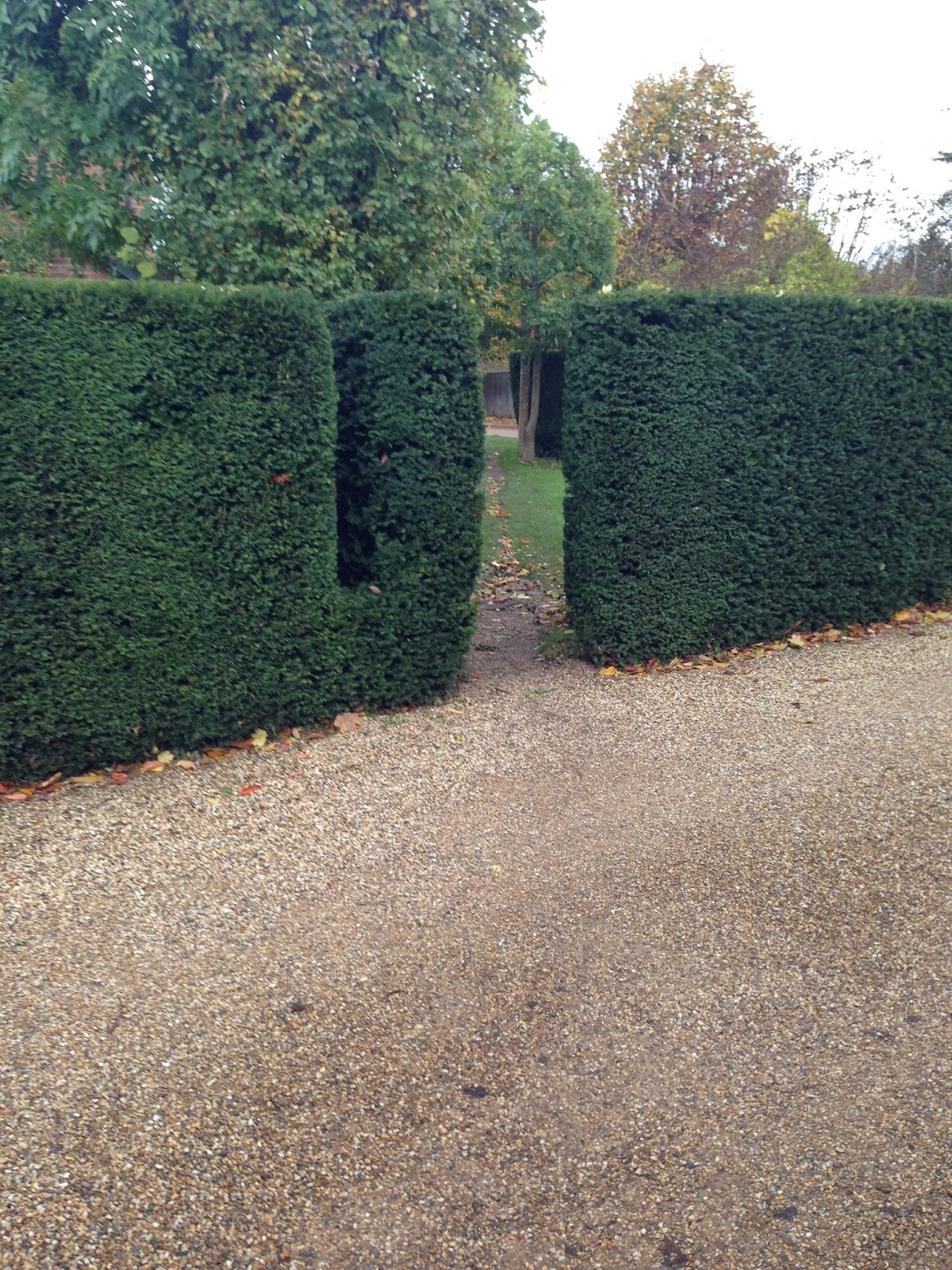 Again with the long private road through Lower Shiplake and onwards towards Henley. 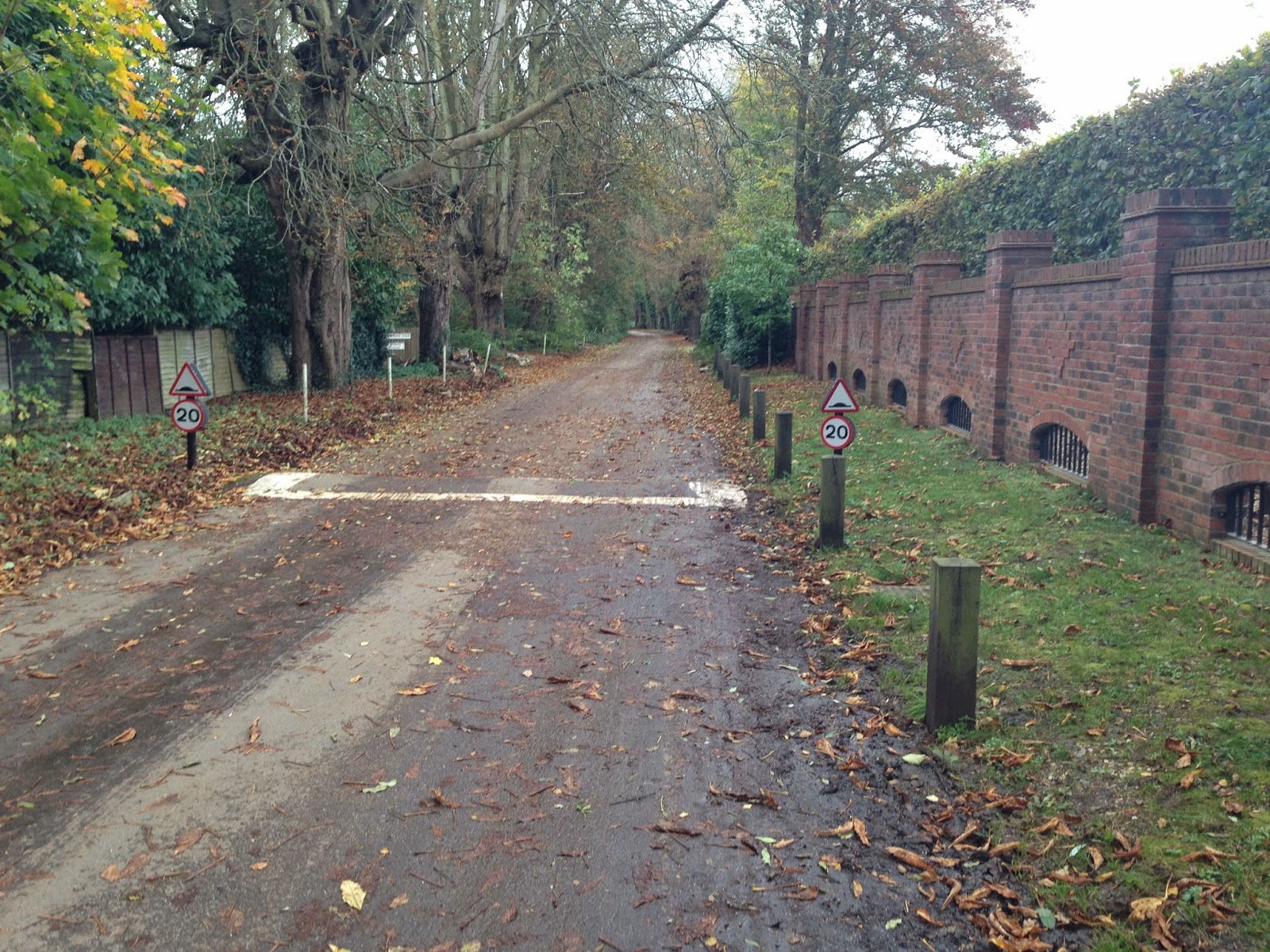 Some of the bridges and weirs are utterly spectacular.  This one outside Henley has to be my favourite.  It goes on forever!  And last time I ran over it, I came across a little spaniel about 1/4 the way to the end, lying on it's belly with all four legs outstretched and trembling.  The poor little fella was terrified of the big gaps between the planks and had given up in a shivering heap, so I called his owners to come and give him a lift to the end of the bridge. 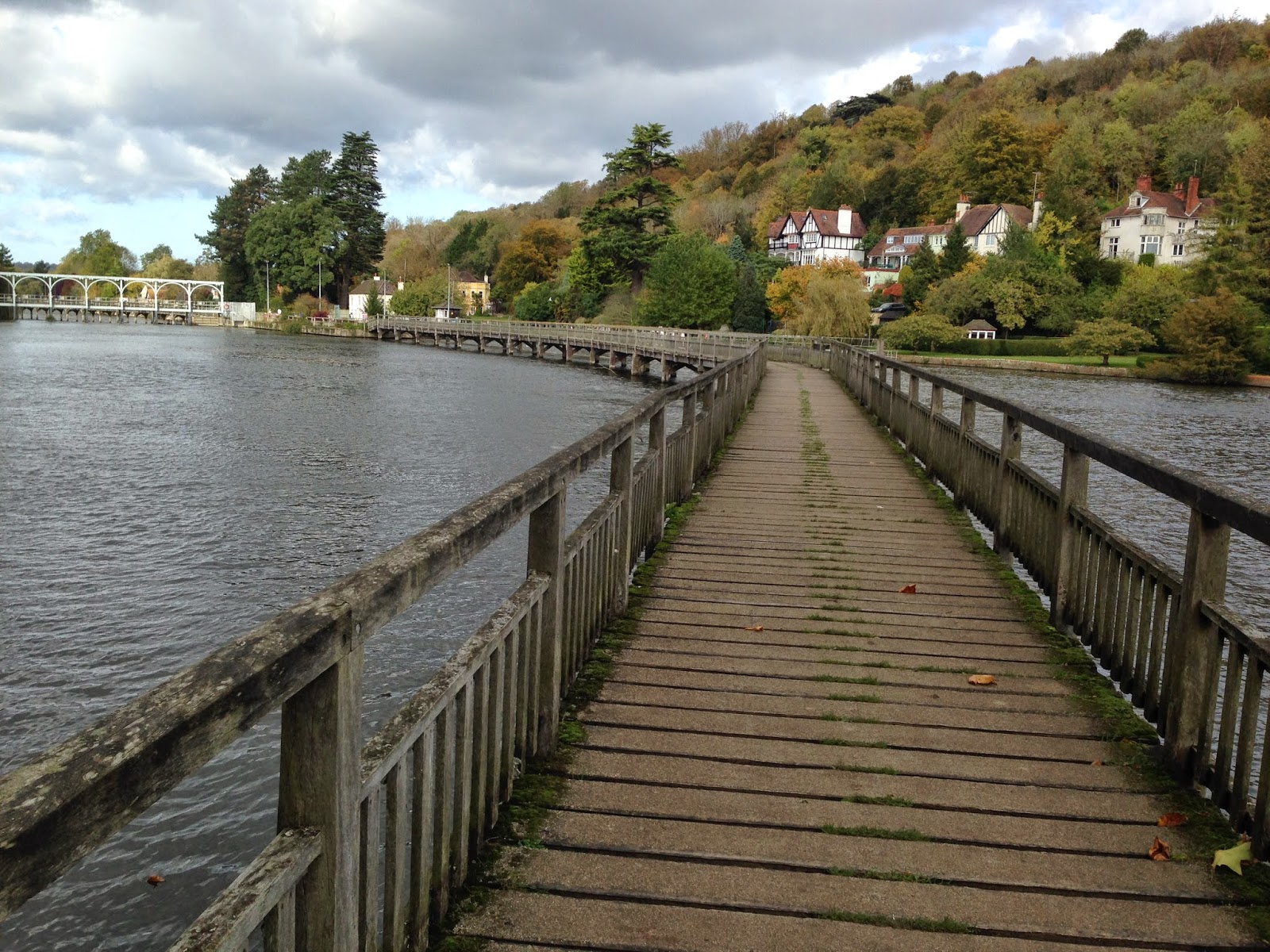 The river was very high through Henley and the wind still pretty fierce, mostly a head wind which was starting to get really boring.

A long concreted section gave way to another field *yawn*.  Pretty though as the sun had broken out for a few hours and despite the wind, the weather was making things look all picturesque. 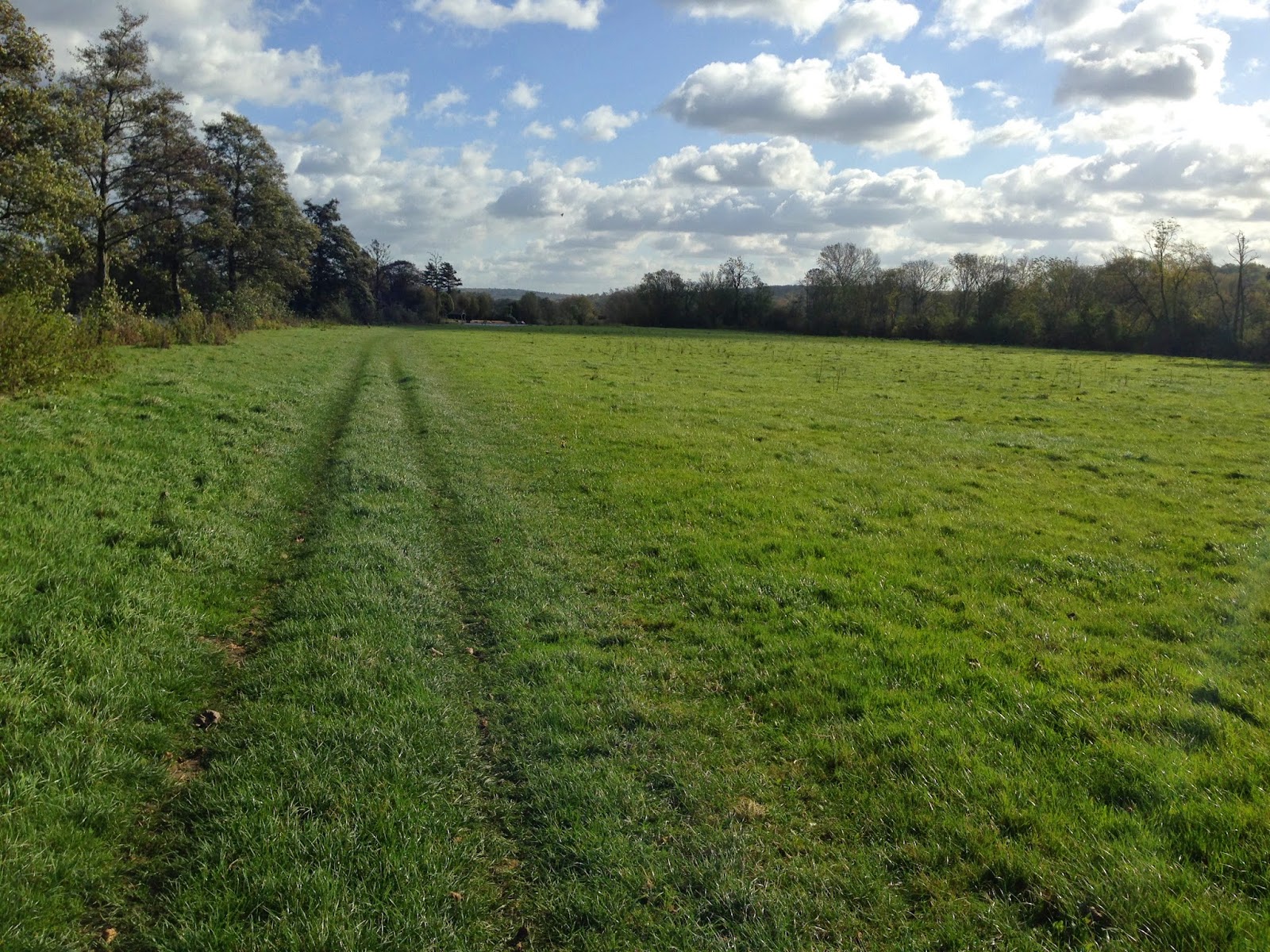 There are stretches of the Thames both yesterday and today that have some utterly enormous river-fronted houses.  Lord alone knows how much they cost or, indeed, how anyone actually gets to work from them to anywhere sensible.

After a while it gets a bit grating, seeing enormous mansion after immense manse, especially when you're a good 30 miles into a 35 and a bit mile day.  I was starting to get a bit weary by now and wondering how far away Marlow was, as that would mark the final couple of miles to Cookham and the end of the day's running.

Thankfully, around yet another of the bends in the river, Marlow's distinctive skyline came into view.

I was pretty confident in the day's mileage, so I knew it was only a couple more miles from Marlow to get to where I was staying that night, just off the river in Cookham.  And as I ran into Marlow, the heavens opened for the day's predicted rain, and for the first time I actually put on my fabulous Salomon rain jacket, put the hood up and trotted through town for as long as the rain lasted.  A whole 5 minutes!   Rain had been promised for the entire day's run and I was pretty pleased that it only came pretty much right at the end and very briefly.  The jacket performed beautifully and I was dry as a bone on the inside; smugness ensued despite the tiredness and wishing for Cookham to come. 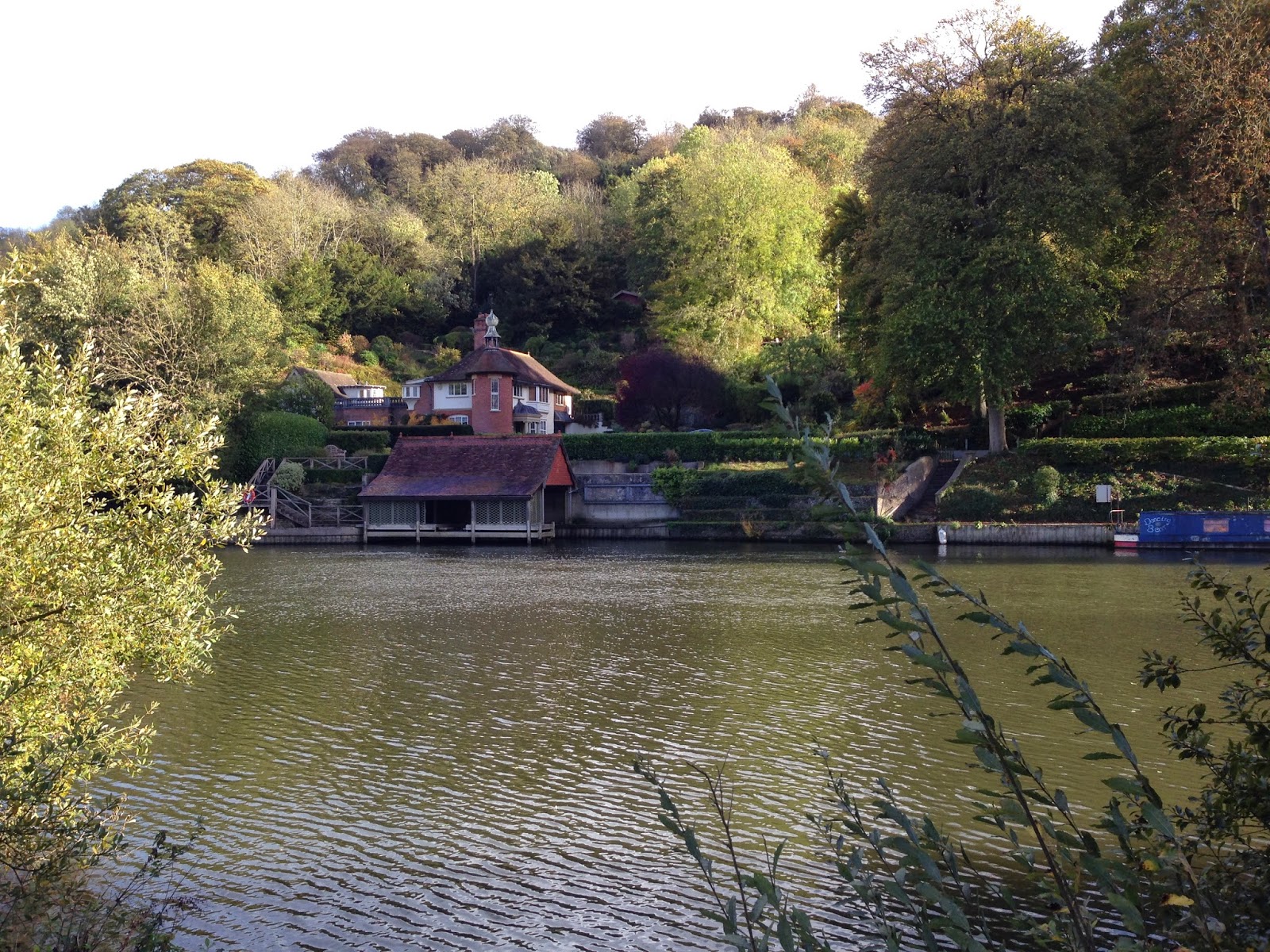 And come it did.  A trek through yet another riverside meadow, almost to the marina in Cookham, before hitting stop on the TomTom for the day and cutting across a field to The Crown for the night.  35.2 miles done and wondering, yet again, how I was going to manage the next day of 35ish miles again.

What was really good about getting started this morning was that it was getting easier to crank up the legs in the morning.  Day one had been rubbish, which was "hilarious" at the time seeing as it was only day one.  Day two was not too bad but hamstrings were quite tight and took over an hour to warm up.  Day three was about the same as day two, but this morning it took almost no time at all and that was pretty heartening.