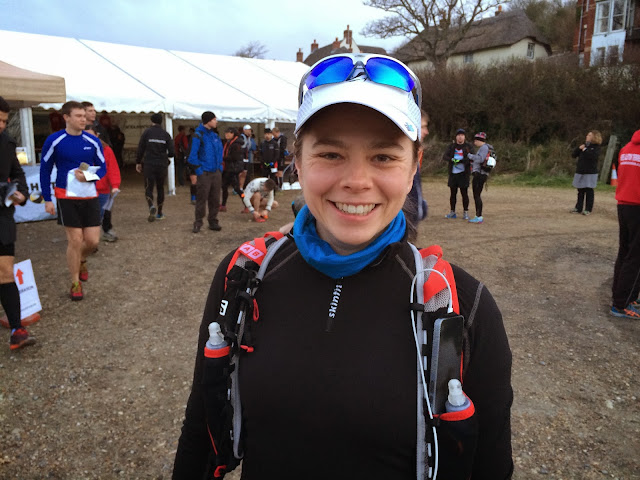 I really really wanted to get 2 UTMB(TM) qualifying points before the end of the 2014 qualifying period (ends 31st December 2013).  I'd wanted that since the moment I finished Rowbotham's Round Rotherham, which gave me that first precious point in the qualifying period.  I had my eye on CCC(TM) - a teensy little 100km race through the mountains from Courmayeur in the Aosta Valley in Italy and ending in Chamonix.  With, as the course organisation calls it, the "Major Difficulties" being  "Ascension of the Tête de la Tronche (2584m) then Grand col Ferret (2537m) during the first third of the race. The second part leads to 3 heavy ascensions : Bovine, Tseppes and La Tête au vents.". 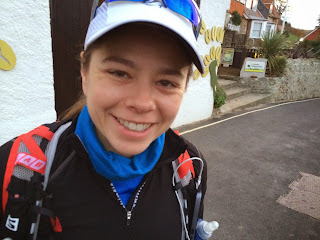 So I decided to sign up for one of the Endurance Life Coastal Trail Series races that had a qualifying point  available before the end of the qualifying period.

This being the Dorset race starting in Lulworth Cove.  Marked as "extreme" and with the logo for the UTMB(TM) qualifying point, it seemed it would do the job.

The thing is, it was never going to be pretty, this race.  I wasn't particularly fit, I'd not done much running (or anything) since Rotherham, and I'd certainly not run any hills since Rotherham either.  I'd not put in the kind of work you really ought to put in for this sort of race if you were giving it the respect it really does need.  With a rating of "extreme", a potential UTMB(TM) qualifying point, and a reported 6085 feet of ascent over 33.6 miles, I actually had no concept of how hard that actually is.

Turns out it's really f'ing hard. 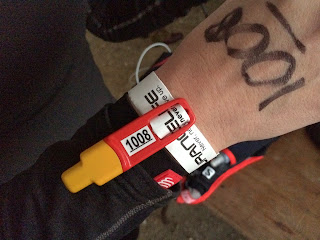 And it turned out that fitness and fuelling wasn't the problem at all,  despite the pain I was in by the end of the marathon distance, but the fact that I'm too slow on the ups from not doing any hill work to speak of.  And I'm too slow on the downs because they're insanely steep and sometimes they're crazy concrete-edged steps of varying height from "normal" to "you have to be 9 feet tall to have legs that make sense for these steps".

If you look at the course profile above (for the marathon distance), there's an awful of those sorts of hills over the route and you need to be able to get up them with the minimum of fuss and grunting.  Unlike how I got up them.  The first few made me feel extremely demoralised; I feared the entire route would be like this and there was no way that I could keep that up for almost 34 miles. 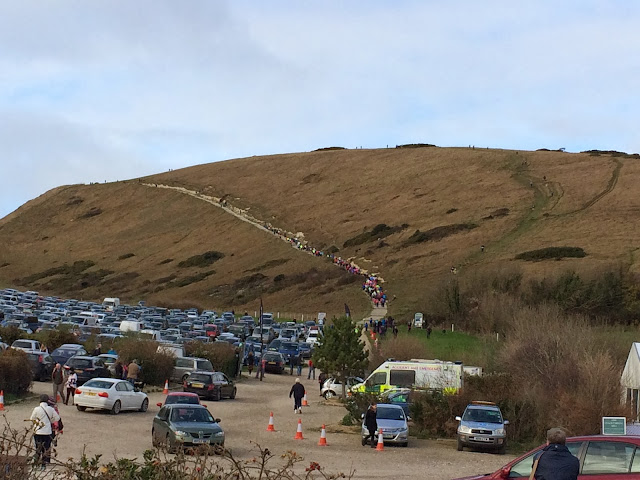 The first hill out of the town (photo above, the paved path on the left) is a nice little intro and stops people from haring off quite so insanely.  The thing is, there's another one real soon after that and it's steep; really really steep. 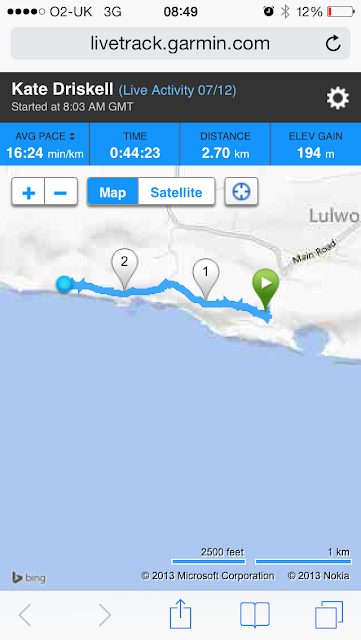 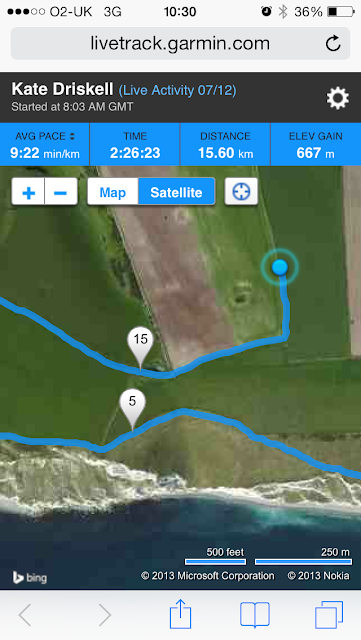 But then things ease off and there's a very runnable section which is still tough, but not insane and then you come back down into the town where you started, via the steep path here. 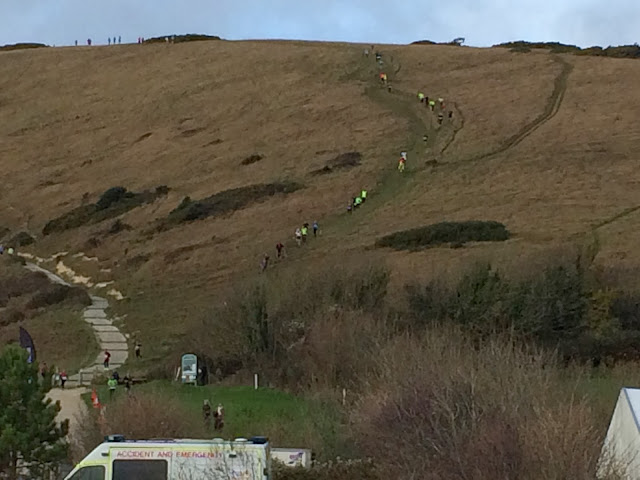 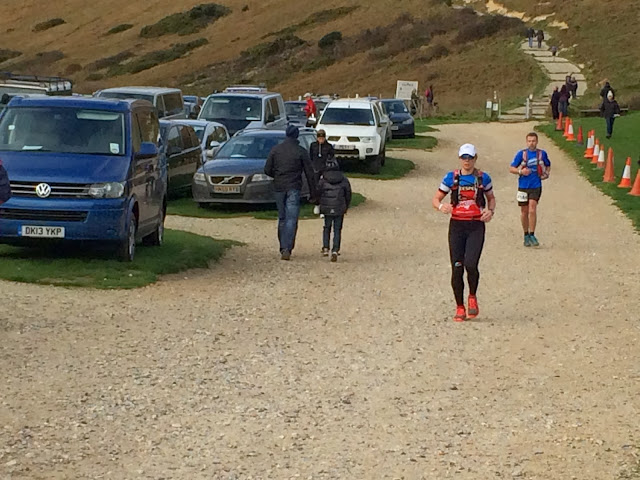 Following that are are some hilarious hills that it was simply not possible to do anything but hike up really slowly and carefully; basically with a wall of grassy ground in front of your face with the occasional muddy step ground into it from years of feet passing this way.  Sometimes they're in a pretty fish-scale type pattern. 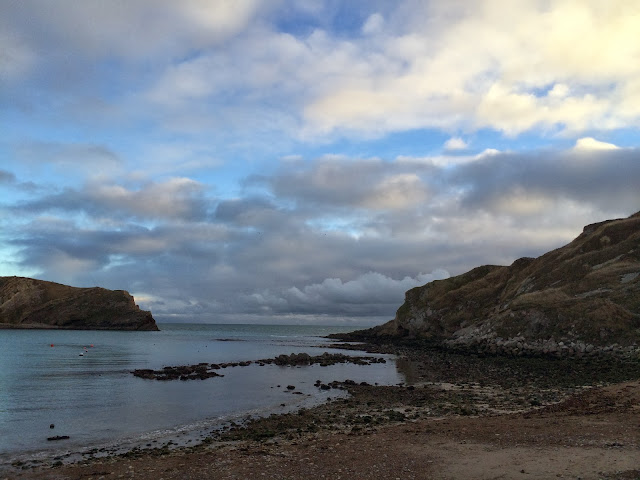 I learned some new techniques, including using both hands on each leg to push down to get up each step on the up (when they're the stupid really high ones) and pointing my feet slightly sideways to get down when my quads were so fried that I was squeaking (with pain) with every step.  I also learned that there are some really nice runners out there; very supportive and friendly.  And there are some really really quick up/downhill runners too. 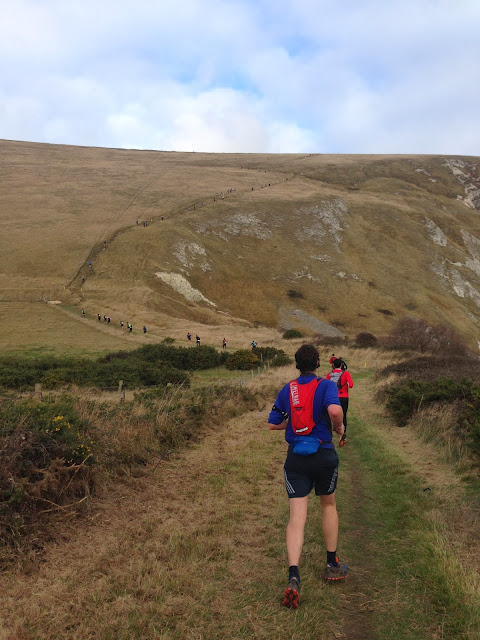 The really low point - stopping at the 3rd water station to find... there was no water left.  I kinda stood there and stared for a while.  I really wanted to stop at that point as I felt awful anyway, really quite sick, I didn't see the point in finishing and I couldn't do the maths to work out whether I'd make the cutoffs on my current pace (actually, I was doing OK at that point and would have been fine).  It took a while to realise that where that water station was, there wasn't a sensible way to withdraw.  No road, not support staff, just one guy and a trestle table with biscuits and no water.  So, I followed the sign and carried on up the hill to the promised next check-point (and water). 6.5 miles never felt so long. 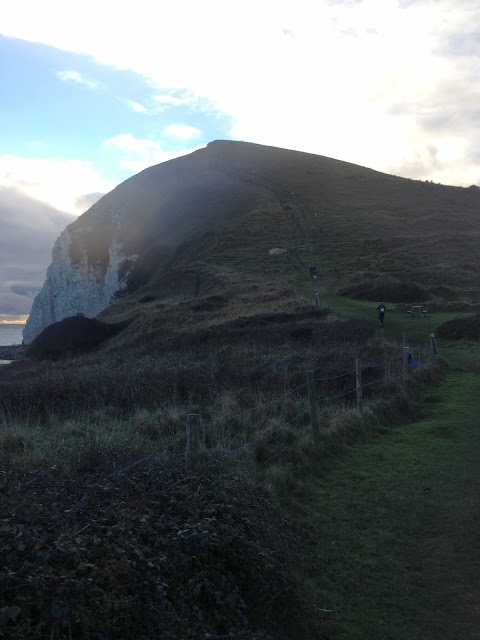 From there to the end there was another nice runnable section and a couple of pretty mean hills;  this little fella (above) with more of those delightful steps in it, then another hill after that.

I got cold as the sun dipped behind a big cloud and was unlikely to show again before the next morning.  Then came a precipitously difficult downhill to a tight turn where you could hear the cheers at the finish line, yet the route took you away from it.  I almost lost it at that point as I thought it was familiar and I'd already run that section and I must be going wrong.  I couldn't see anyone in front or behind me so I went a little bit nuts.  It was in a wooded section, and I had no mobile coverage so I couldn't call to find out if I'd ballsed-it up and had to go back up the hill again.  Soon I saw someone behind so got it together and carried on down, down the track, down some steps and to the bottom of the road where the B&B was!  I -had- run that section before, but in reverse!

Walking down the road towards me was Mr TOTKat, who confirmed I'd missed the cut-off to continue on to the Ultra.  The Ultra course runners run the marathon course, followed by the 10km course and if you get to the end of the marathon later than 3pm, you are not allowed to continue on to the 10km course mostly because it'll get dark and dangerous.  Cutoff for carrying on to the Ultra distance well and truly missed by about 25 minutes, I was ready to stop.  Mr TOTKat jogged up the road (yes, uphill again) and we chatted a bit for the final few tens of meters until someone overtook us, at which point I simply sprinted for the line as I wasn't having being overtaken right at the end.   If I hadn't missed the cut off I would have carried on, put on my arm guards and buff again to beat the cold and just slogged through it for that delicious UTMB(TM) point.  But it was not to be. 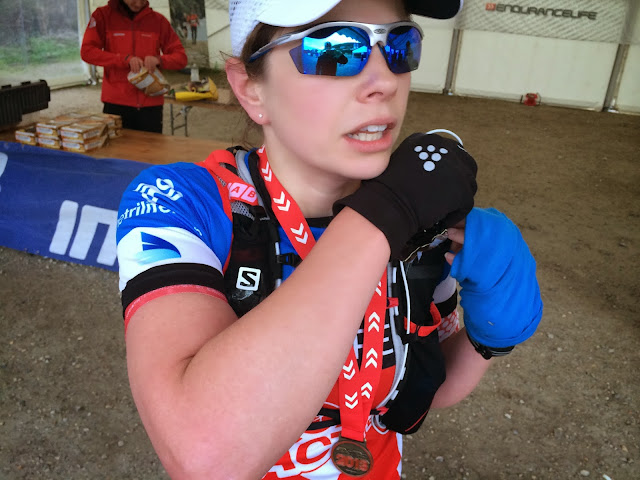 I scored myself a medal as I'd finished the "marathon" (28 miles or so!) distance course and two Builders Bars (nom!). 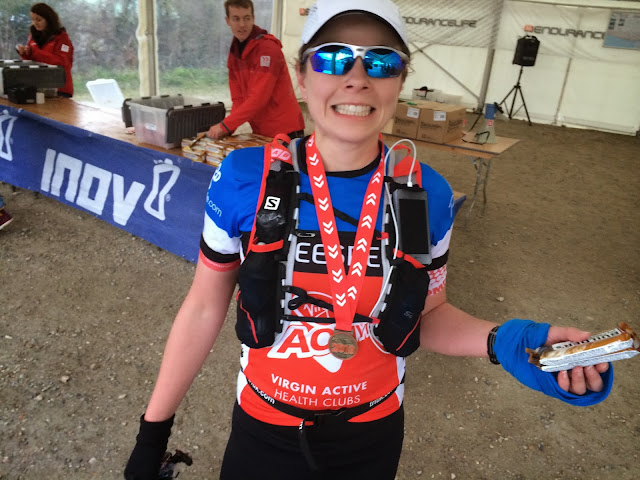 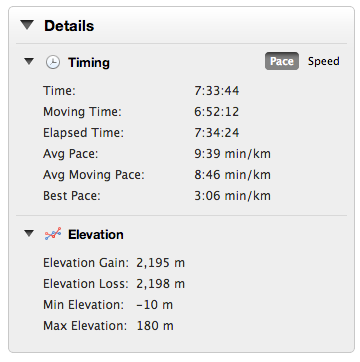