That's one of the biggest pieces of advice that athletes are given.  And it's a good one.  So, I'll likely be ignoring it spectacularly on Saturday.  Never mind this race could take 8 hours if I have a bad time of the hills so if something is not right, it's going to be a long day of not right to get through. 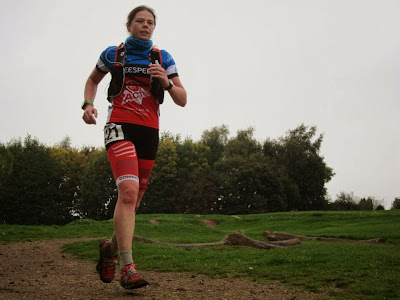 I'll be at the very least wearing new shoes, new socks and a new attempt to avoid the chafing I got on my back at the last long one.  I got that same chafing again on my last longish run home from work and I think I may have hit on why it's happened.  I've only ever run twice in that exact rucksack; the original one was a 2013 early model and was very tightly adjusted, this one is a late 2013 model and I think quite a bit looser when I used it.  So, I'll adjust it to be much more tight AND I'll use this magic anti-chafe lotion impregnated towelette on my back before putting on my clothes and rucksack.  Fingers crossed that will help, cause the chafing from that bag really burns quite badly and causes sharp, acute pain in multiple places across my back.

I'm undecided on the shoes at the moment and I have a bit too much choice on that front, but I have ruled out a bunch immediately and there's a short-list of 4 left.  I won't get to change them during the race so it is quite a key choice.  The socks I can carry a spare pair with me, but the plan is either thick merino Smartwool ones or the brand new Drymax ones I just bought which claim to keep wetness to a minimum compared with many others.

Everything else is tried and tested and should be fine - especially hydration which I think I have nailed now.

No parkrun for me on Saturday as my race starts at 08:15, but I'll be thinking of all those thousands of parkrunners at 9am and maybe one of them will be thinking of me.
Posted by TOTKat at 16:31