Finally, I decided we'd try Abel and Cole for at least some of our grocery shopping.  Having settled on a small veg box for a weekly recurring delivery, I noticed there was venison mince on special offer - cheaper than the 5% fat Aberdeen Angus beef mince from Ocado so well worth a go.  Of course then there were also venison shanks which looked interesting and on special offer too.  I threw in some pork and leek sausages to give them a try as well and, well, the results have been pretty amazing.  Not only were the sausages some of the tastiest we've had, but the potatoes are so flavoursome!  We've had the potatoes twice now, once mashed with carrot and butternut squash with the sausage juices mixed in, and once with the venison shanks.  They're so... potatoey.

Venison shanks were a tiiiny bit too big for my Star Chef, so I had to take a hacksaw to the bones to shorten them a little.  It was quite hard work, but mostly my own fault due to not putting a damp tea-towel under the chopping board.  The bone ends went into the cooking broth so as not to waste the flavour and marrow.  But there was sooo much meat on those shanks - 265g meat per 400g shank (raw weight) - it was an amazingly hearty meal. 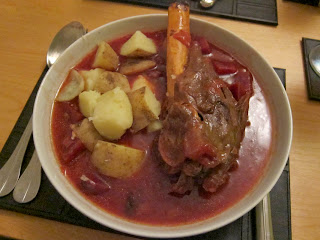 Season the outside of the shanks with salt and pat firmly.  Heat the olive oil in a small pan and sear the outside of the shanks.  Melt the butter and soften the onions in that butter.  Stir the flour in with the softened onions to mix thoroughly, then sit the venison shanks on top of the onions in your slow cooker.  Add the stock and Madeira and stir through well.  Cook on low (stew/soup setting) for an hour before adding the beetroot and bay leaves.  Cook for a further 3-4 hours on low until ready to serve with the potatoes (don't peel them, it's so much nicer!) which have been cut into chunks and boiled for 10-12 minutes until yielding to a fork.

Serve the shanks, vegetables and cooking liquor into a wide, shallow bowl per person and top with the potatoes.

It was all really tasty, sticky on the lips and extremely filling!  And the venison will just fall away from the bone if you pull on it gently with a fork, you honestly will not need a knife at all.  And the beetroot gives the whole thing an amazing colour.

I'll be making a venison chilli later today for freezing down.  Can't wait!
Posted by TOTKat at 14:08