One of -those- weeks

Don't forget the giveaway! Comment on that post before the end of 12th November to be in the running to win.

I've been a bit quiet this week. This is mostly because it's been one of -those- weeks. Up at 6am every day, cycled in and out to work Monday and Tuesday, in on Wednesday for a full day offsite meeting on Wednesday followed by not cycling home, then cycling home Thursday and in and out on Friday. Gymmed on Monday, missed the Wednesday session due to being away, no replacement session on Thursday due to a lack of towels at the gym so took a towel on Friday to get a second session in - which was fabulous!(*) Meanwhile I've been in the office/work 8am to at least 6pm every day this week. Needless to say, I'm a bit tired and I've not had much chance to do anything except commute and work.

So, food has suffered a little in the evenings. Though we've not succumbed to a takeaway so far, Thursday night's dinner was a couple of toasted bagels with poached eggs, chorizo, cream cheese and Marmite (not all on the same bagel!) because I'm a bit sick of cooking at the moment and I'd not got anything out in the morning as we'd planned to go out and changed our minds during the day. 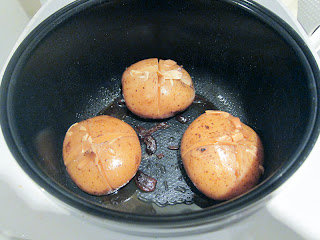 I did have some fun with the Star Chef again this week. This week's experiment was baked potatoes...

6 hours on the "soup/stew" setting, having cut into them, stuffed the cuts with sliced garlic, rubbed the skins with olive oil and salt, and they were soft all the way through without being mushy. I do want to see if I can find a way to get the skins a bit drier though. Maybe a different setting? It'd help if I knew what temperatures the different settings related to as I'd like to try the "bake" setting but I'm not sure how hot that gets. Worth another go next week I think.  But again, it's the convenience of being able to set the timer and actually have baked potatoes that's just brilliant.  We've not had them in ages 'cause they just take too long to cook in the evening.